A game removed from recording a triple-double for the Maine Red Claws, Fab Melo was one rebound and one block away from recording another. The Celtics prospect continues to develop his game with hopes of getting a chance in Boston sometime soon.

One game after posting a triple-double with points, rebound and blocks, Celtics prospect and current Maine Red Claws player Fab Melo scored 32 points on 12-of-21 shooting, pulling down nine rebounds and blocked nine shots in Maine's 108-94 victory over the Idaho Stampede.

Melo continues to look impressively comfortable as a focal point of what Maine wants to accomplish on both offense and defense. Defensively, though he (sarcastic tone here) only had nine blocks, he was all over the place around the basket. Notably, his weak side defensive rotations were looking very crisp and sound.

It's easy to tell just how comfortable and happy he's becoming by watching him play defense. Coming out of college he was known as a raw, defensive-minded center. However, having spent his time in college playing in Syracuse's zone (and having not been playing the game of basketball for an extended period of time), there were still a lot of unknowns about how quickly he could pick up the fundamentals of defense outside of a 2-3 zone.

Melo managed to get the ball on the low block on a number of occasions and continued to display a nifty little hook shot that, if he masters it and can make it with regularity at the next level, is going to to be really hard to stop. The combination of his wingspan and, well, the fact that he's really tall makes it a shot that is hard to defend if he's doing it well.

In a little over 36 minutes of playing time, Melo scored 57.1 percent of the shots he took. A good percentage of those baskets were dunks, as the Maine backcourt did a good job of penetrating, drawing in the defense and dishing it to Fab underneath the basket for the score. 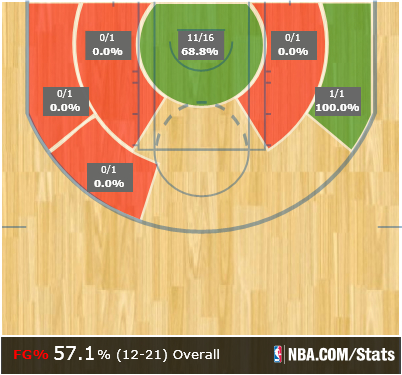 Perhaps the most unsung part of his game that should come as a pleasant surprise to most is Fab's performance from the free throw line. He took nine free throws on Wednesday night and made eight of them (88.9%). His stroke from the line is fluid and is encouraging. With all of the fanfare surrounding Dwight Howard's inability to shoot free throws, it's good to know Fab seems to have a firm grasp on the importance of being consistent from the charity stripe.

His second monster game in a row is no reason to overreact. Doc Rivers noted recently that not a single soul has told him Fab is ready to be called up to the NBA. With the recent addition of Jarvis Varnado, Celtics fans can likely bank on Fab remaining in the D-League to develop his game even more for the time being.

Any abrupt move to call him up, while it sounds nice because of his recent stat lines, could be counterproductive to the development of his game as an NBA center. For Melo to be called up, sit on the bench and not be able to consistently polish his skills is not something Boston wants to see. Rather, it would behoove Boston to let him continue to figure out his offensive skill set and work on getting better rebounding positioning before giving him a chance in Boston.

Anything premature could stunt his growth as a player and limit the chances he has to make an impact. Instead, Melo will remain in the D-League and, as long as nothing changes, continue to dominate various frontcourt duos and develop the confidence that the Celtics are hoping will make him a valuable asset in the coming years.