Celtics look to get back on track vs Warriors

The Celtics look to shake off their loss to the the Clippers and get back into the win column as they take on the surprising Warriors.

Share All sharing options for: Celtics look to get back on track vs Warriors

The Celtics have been consistently inconsistent this season so far. They go from a dominant win over the Nets to an embarrassing loss to the Clippers. They have hovered around .500 all season, never able to get above and stay there. Doc said that they are very close to putting it together. We have seen glimpses of how good they can be as they were against the Thunder and Nets, but have also seen how bad they can be as they were against the Clippers. They need to close out this road trip strong and finally get above .500 for good. 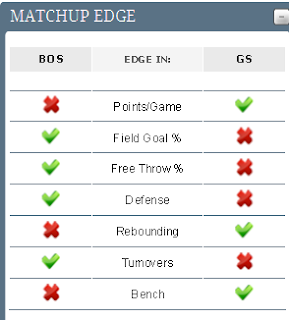 Stephen Curry is a good young point guard and has been impressive so far in his career and especially this season. He proved by winning the Skills Challenge that he is quick and talented. He sometimes will have defensive lapses and when he does, Rondo needs to be ready to take advantage. Curry is one of only three players in the league averaging at least 20 points, six assists and three rebounds, along with LeBron James and Russell Westbrook. Rondo's defense on him will be key to getting this win.

Lee is a tough player and isn't above playing rough and dirty. KG goes from one tough player in Griffin to another in Lee. Lee is leading his team in rebounding and so KG needs to box him out and deny him position for rebounds and especially tip ins and put backs. Lee plays hard every game and KG needs to match his intensity.

Paul Pierce has been playing very well aside from the Clippers game. He needs to use his veteran wiles to win this matchup with the Warriors talented rookie. Barnes ranks eighth in scoring and tied for eighth in rebounding among his fellow rookies.

Defense - The Warriors can put up points quickly and in bunches. It will be important for the Celtics to bring their defensive intensity into this game, especially to shut down the Warriors' fast breaks. The Celtics must especially guard the perimeter as the Warriors are 5th in the league in 3 point shooting percentage.

Take Care of the Ball - The Warriors can be very disruptive by getting into the passing lanes. The Celtics seem to go through periods in every game where they turn over the ball several times in a row. The Celtics need to stay focused and not give the Warriors any easy opportunities to steal the ball or to get out on the break.

Be Aggressive - The Celtics need to come out focused and take control of the game from the beginning. The Warriors are undefeated when they lead by double digits at the end of the first quarter. The Celtics have to be the more aggressive team throughout the game. They must be aggressive on defense, on the boards, in chasing down lose balls, and in taking the ball to the hoop and not settling for jumpers.

Road Game and Back to Back

Entering his 28th NBA season, Dan Crawford has officiated 1,822 regular season and 270 playoff games, including 27 NBA Finals games. During his NBA tenure, Crawford has officiated the 1994 and 2001 NBA All-Star Games, and the 1992 Japan Games in Yokohama. Prior to joining the NBA, Crawford spent four years officiating in the CBA. He has eight years of collegiate officiating experience in the Chicagoland Collegiate Athletic Conferences and officiated the 1983 and 1984 National Junior College Nationals. Crawford has been honored for his achievements in the Northeastern (Ill.) Wall of Fame. Crawford was a member of the Northeastern University basketball team.

After one of the Celtics playoff games in Chicago in round 1 in 2008, there was some controversy when he was seen leaving the arena with his family all decked out in Chicago Bulls gear. He's been in the news lately because he has been accused of having a bias against Marc Cuban because the Mavs were 2-16 in games officiated by Crawford last season and Cuban has been very vocal about it. The Celtics are 2-8 over their last 10 games with Crawford officiating. The Celtics haven't fared much better than the Mavs with Crawford as a ref. This is the Celtics' first game this season with Crawford as an official. The Warriors are 1-0 this season and 5-5 over their last 10 games. His home W/L record is 16-8 this season.

Haywoode Workman has officiated 209 regular season games in his first four NBA seasons. A second round draft pick by the Atlanta Hawks in 1989, he played professionally for eight seasons in the NBA and overseas betweeen 1989 to 2000. He spent four seasons officiating in the NBA Development League and also officiated in the CBA before joining the NBA. Workman joins Bernie Fryer and Leon Wood on the short list of NBA players who have made the transition to officiating. Workman was an All-State quarterback in North Carolina in 1983 and played in the NC/SC Shrine Bowl. He played one year of football and basketball for the all time winnigest HBCU coach the late Clearence "Big House" Gaines at Winston-Salem State University. He was inducted into the Oral Roberts University Athletics Hall of Fame in 2003.

The Celtics are 0-3 this season and 5-5 over the last 10 games with Workman, including a loss to Philly in the preseason. There hasn't been a lot of controversy over his officiating. Unlike some of the NBA officials, he keeps a fairly low profile. The Warriors are 3-7 in their last 10 with Workman. His home W/L record is 12-8 this season.