Celtics and Sixers Continue the Battle at the Garden

The Celtics take on the Sixers for the second night in a row as they complete the home and home series.

Share All sharing options for: Celtics and Sixers Continue the Battle at the Garden

The Celtics take on the Sixers for the second night in a row as they complete the home and home series. The Celtics are coming off of a heartbreaking loss in over time in the first game. And playing the extra minutes in overtime may result in less energy for this game.

This game will be at home and hopefully the crowd can give them a boost and help them to dig down and find some extra energy. The Sixers also played the extra minutes the night before, but they are younger and it probably won't affect them as much.

The Celtics need to drive the ball more and depend less on jumpers and 3 pointers since their legs may not be there in the second of back to back games. Rondo is coming off of a triple double and pretty much had his way with Jrue Holiday, who might be looking to regain the edge. Rondo needs to continue to play aggressively on both ends of the court.

Rondo appeared to slip and possibly injure his ankle at the end of the game last night, but word is he is fine and will definitely be in the starting lineup tonight. Barbosa and Jared Sullinger are still suffering from some flu like symptoms but are also expected to play tonight. 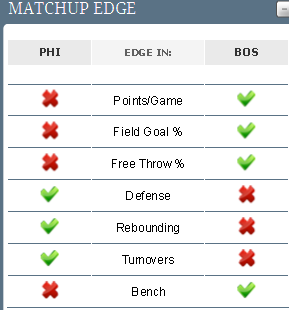 Turner is becoming the Sixers go-to guy. He scored 26 points (10-26) and grabbed 10 rebounds in the last game including the game winner. Paul Pierce had an almost identical shooting night with 27 points on 9-24 shooting to go with 4 rebounds and 5 assists. Pierce also played almost 45 minutes and that could be a factor in this game. If his legs aren't there he needs to pass more and shoot less and save his legs for guarding Turner.

As has been the case so many times, as Rondo goes, so go the Celtics. When Rondo is aggressive the Celtics seem to click on all cylinders. When he is passive, they struggle to score and seem to lapse into trying to do too much as individuals instead of playing team ball. Rondo had a triple double in the last game, but missed the last shot in both regulation and in OT. The Celtics need him to continue to be aggressive in this game also.

Take Care of the Ball - The Celtics tend to turn the ball over way too much. The Celtics need to keep their focus and make smart passes and avoid the costly turnovers that almost always lead to a score for the other team. They turned the ball over 18 times for 21 Sixers points. That was the difference in the game. They must take better care of the ball.

Rebound - When the Celtics put out the effort to win the battle of the boards, they usually win.. Rebounding is mostly effort and will and when the Celtics put the effort on the glass it usually shows up in other areas also. They did a good job of staying with the Sixers in the rebounding category and they need to continue to do that again in this game.

Back to Back and Home Court

The Celtics seem to be affected more when they play back to back games. Hopefully they don't run out of gas before the end. The home crowd should give them a bit of added energy.

The Celtics are are 1-0 this season and 6-4 over their last 10 games with Phillips as a ref. One loss last season was game 2 vs the Sixers that he officiated along with Dan Crawford in which KG was called for an offensive foul with 10 seconds left and a chance to win the game. The win this season was against the Raptors and the officiating was decent. It was Phillips and fellow ref for this game, Josh Tiven, that got Tommy to swear on the air last season in a game against Houston about the refs falling for all the blank blank flops. The Sixers are 5-5 in their last 10 games with Phillips. His home W/L record this season is 8-6.

The Celtics are 1-1 this season and 5-5 over their last 10 games with Tiven. The loss this season was New York in OT in the preseason in which the Knicks shot 38 free throws to 33 for the Celtics. The win was the Orlando game, also worked with Phillips. The Sixers are 7-3 in their last 10 with Tiven over the past 2 seasons. Tiven lives in Connecticut and he has a twin brother who is a big Celtics fan and who was shown in the crowd at the Garden in a game he officiated there. His home W/L record this season is 9-3.