Where Did Greg Stiemsma Go?

Share All sharing options for: Where Did Greg Stiemsma Go?

In the first game Greg Stiemsma played in as a Boston Celtic, he had six blocks in twenty minutes. Three games after that, he was in the starting lineup against the Washington Wizards, and had 13 points and 7 rebounds in twenty-one minutes. Stiemsma was quickly cultivating a label in Boston, one of a cult hero. The fans cheered wildly and uncontrollably every team Stiemsma entered the game, and became the center of a few featured pieces by America's finest sports blogging industries. His numbers were not exactly mind-boggling, but his backstory was strong enough for NBA fans to continuously root Stiemsma on -- think a lesser Jeremy Lin. He even learned last week that the Celtics would likely be employing his services for the rest of the season, a huge break for someone who has spent most of his professional life overseas or toiling in the D-League.

All these things are nice, but lately, Stiemsma has almost vanished from the Celtics primary rotation. Take a look: 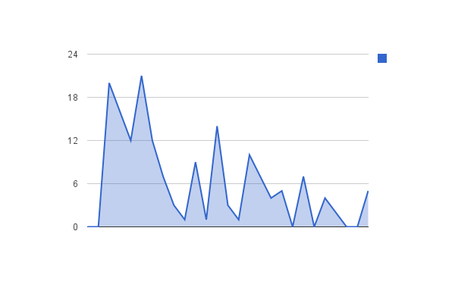 Those are Stiemsma's numbers from the beginning of the season, and it's a pretty dramatic shift in playing time. Stiemsma is no longer the Celtics go-to big body off the bench -- that job is now reserved for Chris Wilcox and JaJaun Johnson. But Doc Rivers seems reluctant to even put Stiemsma in the game when the Celtics would otherwise appear desperate for size. As CSN's Rich Levine points out, during Sunday's Bulls game, Stiemsma seemed primed to enter into the beginning of the fourth quarter, as Garnett was tired and Johnson and Wilcox both had picked up four fouls. This didn't happen, and Wilcox almost immediately fouled out.

It doesn't make sense for Doc to be so reluctant with Stiemsma at first glance. His broad statistics -- 1.5 PPG, 2.0 RPG, 1.0 BPG -- obviously aren't insane, but they aren't worthless given his average of 7.8 minutes per game, a number that is misleading and should be lower if not for a few twenty minute outliers earlier in the year. He even has a PER of 13.9, which again isn't anything extraordinary, but it's good enough for Stiemsma to be considered a rotational player.

The problem with Stiemsma shows up in the more advanced metrics. When Stiemsma is playing, the Celtics offensive/defensive efficiency goes 90.9/101.2, as compared to 101.2/95.3 when he's not in the game. That means the Celtics are worse off offensively and defensively when Stiemsma is in the game, according to that statistic which measures scoring per 100 possessions. If that doesn't convince you, the Celtics are -45 with Stiemsma, +138 without. If that doesn't convince you, their Pythagorean Record is 14.9-67.1 with Stiemsma, 57.3-24.7 without Stiemsma.

Those statistics are especially crazy when you consider that the Celtics are 7-9 when Stiemsma plays less than five minutes, but 8-3 when he plays more than five minutes. None of this makes sense to me either. The broad statistics seem to insinuate that Stiemsma deserves more playing time, but the advanced statistics claim that whatever success the Celtics have with Stiemsma, they are doing in spite of him. Doc Rivers seems to think Stiemsma's recent demotion to the end of the bench stems from this:

"Really, it's speed wise, and I think he actually has the speed, it’s just technique -- especially in pick-and-roll coverage. He pretty much stands straight up and it’s amazing how quickly the league scout you. He comes in and they are running pick-and-roll, and they know that. But he’ll get it."

If Stiemsma's technique improves, do all those numbers change? I'm not positive, but I would have to think some difference would be made. If he can become an asset rather than a liability, and make the necessary adjustments within his game, maybe he could steal minutes back from Wilcox and Johnson. But as for now, it appears that Stiemsma has earned his damnation to the end of the pine -- something that seemed inconceivable at the beginning of the season.