Kobe Bryant answered a number of questions related tot he Celtics in Steve Bulpett's article today. The following two kind of stuck out to me.

Kobe finds much to talk about with C’s, Lakers - BostonHerald.com

On his lengthy, illustrious career: "It's more than I could have imagined, to be honest. I was very, very fortunate to be part of a storied franchise. There are really two storied franchises in Boston and us in LA, and I was very lucky to be drafted by one of them. You know they're going to make right decisions, right choices, and because of that I've had a successful career."

On his desire to win a sixth championship:"I’m obsessed about it. I’ve got to get it. It’s just one of those things. It’s what I play for. I can think of nothing else. As a kid growing up, that’s all I saw. I watched Bird. I watched Magic (Johnson). I watched them win multiple titles. I watched (Michael) Jordan win multiple titles. . . . After you win one, you become addicted to it. You win two and win three, and you just get greedy. So I want another one."

There might not be a more Kobe Bryant-ish quote than that last one.

Bonus Link: Check out the pics and quotes on this Red's Army post. So odd seeing a young Kobe in a Celtics t-shirt. 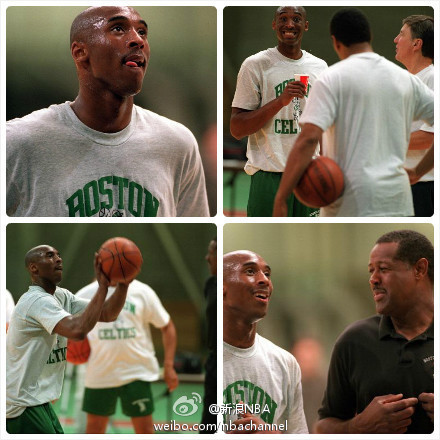