5 Observations From Celtics vs. Lakers

Share All sharing options for: 5 Observations From Celtics vs. Lakers

Whenever the Celtics play the Los Angeles Lakers, we are able to get a good sense of both teams current position in their seasonal evolution. More than other games, it definitely seems that both teams are actually going out of their way to try, rather than just coast for three quarters the way teams generally do during mid-March games. All facets of the Celtics season were on display Sunday, both good and bad. Once you got past Jeff Van Gundy's various gripes of the officiating, and the fact that the Celtics uniforms had them looking like Notre Dame's JV squad (shouts to my dad for that snippet of hilarity), one was pretty much able to identify all the various story lines and undertones that have made up the 2011-12 Boston Celtics season. Here are just five parts of the overall narrative:

1. The Celtics are small.

Even with Chris Wilcox (currently out as he is undergoing tests for a heart ailment), the Celtics have very little to offer in terms of size. Today, we saw the three-headed mutant of Greg Stiemsma-Kevin Garnett-Brandon Bass get swallowed up by Andrew Bynum and Pau Gasol, something that happens during what seems like every time these two teams meet. Garnett and Bass had slightly-above-average offensive games (Bass especially, who's mid-range game was on point until he missed a wide open 19-footer that would have put the Celtics up one with 0:34 to go), and Stiemsma played well as his streak of extended action continues, but it was nothing compared to the combined 33-27 effort of Gasol and Bynum. Now, as Jeff noted in an earlier post, that duo is nowhere to be found in the Eastern Conference. But the kind of dismantling that went on during this game makes me uneasy, and that JaJuan Johnson saw no playing time today is sort of mind-boggling. The Celtics had three 4's and 5's today, and Johnson is nowhere to be found? In a game against Gasol and Bynum, a duo that has continuously scorched the Celtics over the past four years, you need all the help you can get. Bass and Stiemsma can only do so much with their given talent, and Garnett, well...

2. Kevin Garnett is infuriating to watch.

Garnett's much-ballyhooed move to center drew critical acclaim upon its inception, and for good reason. It was bringing him closer to the basket, something he has refused to go near throughout his career. His offensive and rebounding numbers went up immediately, and a move to center was necessary given the lack of height that was mentioned in the last point. But as a center on Sunday, he was maddening. Garnett only took two shots within the painted area throughout the game, and on defense, he was eaten up by Bynum and Gasol -- culminating with Bynum hitting two dagger shots in Garnett's area in the final 1:16. These are becoming more and more commonplace as Garnett ages, and the Celtics have done little to build around him in the forward position (Johnson is a step, but what use is he if he spends a big game on the bench?). Garnett lives in that 16-23 foot range on offense, never challenging opponents inside and never taking a step back to hit a makeable three. I realize this is who Garnett is, and I accept that. But gosh, is it causing my hair to fall out.

The Celtics bench got outscored 15-11 on Sunday, which obviously isn't a major atrocity. But it's how little an impact they seem to make is what gets me worried, as the Lakers at least have the semblance of a bench that could provide a spark plug. The Lakers bench had a +/- of +22, and the Celtics had one of -21. These numbers are admittedly skewed and somewhat difficult to fully gauge side by side, but there is still some importance that comes out of that. It means that when the Lakers bench, or players from the Lakers bench, are in the game, the offense is still able to flow. The Celtics basically shut down all operations when it is mostly bench players in the game. Out of the five bench players who played Sunday (Stiemsma, Avery Bradley, Sasha Pavlovic, Mickael Pietrus, and Keyon Dooling), who is realistically going to help contribute? Pietrus had the greatest offensive impact (5 points!), and missed almost half the game with a rolled ankle that allowed him to stare menacingly at Ron "Metta World Peace" Artest: 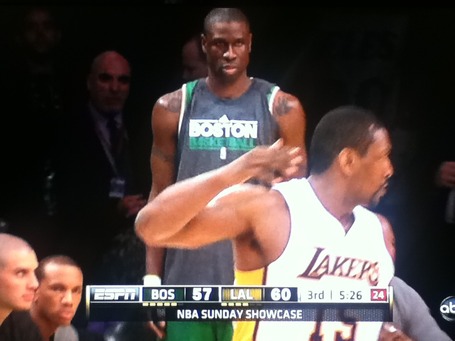 4. Rajon Rondo's jumpshot is a thing

Rondo went through warm-ups looking like a Kenny Powers/Terminator hybrid, due to his eye being gouging by Marcus Camby last game. So naturally, one could rightfully have assumed that Rondo's eye problems were going to cause a problem in terms of his already unstable jump shot, or just give him super powers like laser vision or mind control. The superpowers Rondo received did not come in the form of laser vision (unfortunately), but rather a 4-9 day from beyond 18 feet, something any Celtics fan would tell you is a good thing. The Lakers deployed their regular anti-Rondo strategy of giving him ten feet to work with, assuming that Rondo would not have the audacity to pull up an shoot a jump shot (a feeling he regularly does not have): 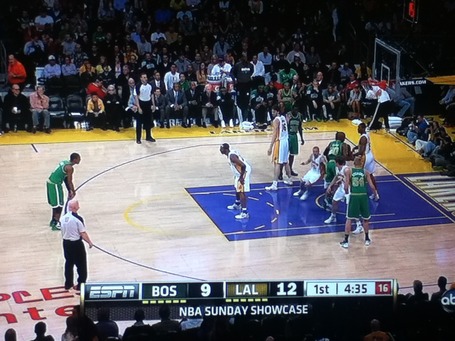 That's a lot of room Rondo was being given, and he occasionally took advantage of it and succeeded, which was a pleasant surprise. If Rondo can continue to develop that shot, there's no reason that he can't be one of the best players in the NBA. More importantly, if Rondo can continue to hit it at the rate he did today, the Celtics maybe have higher aspirations than just a second-round exit as a few have surmised.

5. Are the Celtics overachieving?

Most of the points listed above are negative things (yay!), and make the Celtics seem like a team doomed come playoff time. Normally I'd agree with that sentiment, but today's game surprised me. The Lakers were obviously the better team, and appeared to demolish the Celtics in the first half. Yet, they were only up two, and easily could have been up double digits. The Celtics were able to stick around and make this into a ball game, up until the final minute. Now, I'm not one for "moral victories", but there's some good that can be taken away from this game. The Lakers, as hard as it is to admit, are a very good basketball team, and the Celtics were almost able to go on the road and sneak away with a victory. A team that has so many issues should not be able to do that, and the Celtics nearly pulled that off. Something needs to be said for that. The Celtics are overachieving in that they are in games they have no business being in (i.e. this one), which is an exciting yet frustrating thing to endure as a fan. Celtics fans hate losing to the Lakers, but this game is certainly not one to hang heads about.