In past seasons, March and April have been months where the team has coasted, because for the last four years, they've been title contenders just hoping to be healthy in time for the playoffs. But with a chance of grabbing the Atlantic division crown from the Sixers and the need to keep the Knicks and Bucks at bay, .500 ball isn't going to cut. Boston can ill afford a bout with senioritis right now because--like the real chance that the C's could actually miss the playoffs (gulp!)--there are real ailments to deal with. Ray's dealing with a bum ankle and it sounds like Pietrus could be out "for a while." It's all hands on deck. The Celtics have gutted out the last few games with a patchwork rotation that included Avery in the starting lineup and Stiemsma as the first big off the bench. This morning, Forsberg was speculating on whether or not the Celtics should add another player for the rest of the season. The team has the option to fill Jermaine O'Neal's roster spot, but Doc doesn't see that happening:

We may add another guy just to get through the year. But we'll see; there's no out there.

Honestly, I'd be surprised if we brought a big in.

Forsberg makes the case that the only speculative add the Celtics could make might be a for a D-League player that might show some promise for next season like they did with Gaffney and Lafayette two years ago. Sentimentalists out there are still clamoring for Leon Powe and as much as I'd love to inject some of that 2008 magic into this team, I really doubt Leon could help us right now. I hate to even post this but I found this recent interview with some footage of him playing in Puerto Rico and it's not pretty. He's still got that heart and humble attitude that made Leon an overachieving second-round pick but it's clear that his knee injuries have robbed him off that spark that helped win Game 2 against the Lakers.

Hell, now I feel bad. I'm posting this to wash that taste out of my mouth:

Leon Powe Steps Up (via NBA)

Like I said, I'd love to have Leon on the bench even if just for a token presence, but realistically, if I'm in Ainge's shoes, I just stand pat. Unless there's some loophole where we can get an early look at Austin Rivers and see how he fits in Celtic green, there really isn't a move out there. It's been a roller coaster season for all of us, but think of what Danny's been through for the last couple of months. Before the season started, he had arguably put together the best bench in the Big Three era. With Jermaine as the starting 5, we were deep with veterans at every position with Dooling, Daniels, Green, Bass, Wilcox, and later Pietrus. Oh yeah, he did this all under a shoestring budget with 2012 cap space in mind and still preserved. He honestly doesn't get enough credit for this.

As the shortened season progressed, injuries (SEASON-ENDING INJURIES) took out key rotation players. Right before the All Star break, Ainge said that "our team, as it is right now, is not a team that we feel like is a contending team the way we're playing. And they have to step it up, and this road trip will be a very good test for us." The Celtics went 0-4 on that road trip. Then, the team had to deal with trade rumors. Was Rondo on the block? Were the Big Three going to be prematurely broken up? But since the deadline passed without a deal, the team has flourished with the emergence of Bradley and Stiemsma. Outside of the Bulls (13-3) and the resurgent Suns (11-4), Boston has posted one of the best records at 12-5 since the break, a record that included an eight game, two week road trip and a rash of more injuries.

I'm sure this isn't the contender that Danny envisioned at the start of the season, but he has to be happy with how it's turned out and without an impact move at his disposal, we may all just have to ride it out and see where this season ends. Doc has said that this week will probably provide the last opportunity for this team to get a practice in so adding another player outside of Ryan Hollins seems moot. JJJ is still having problems with the defensive rotations and he's been here since November. The only guy that makes any sense to me is Rasheed Wallace but only because of his familiarity with the schemes. Sure, Danny could pluck another D-Leaguer and maybe catch lightning in a bottle again like he did with Stiemer, but with 17 games left, the fact of the matter is, what we see today is what we're going to get tomorrow and frankly, that's pretty good. All things considered--the injuries, the shortened season, the trade rumors--Danny and Wyck should put their pocket books away and just appreciate this season.

If this truly is the swan song of the Big Three, this season might be their best. Regardless of how it ends, it's really shown me what it's all about to be a Celtic. Before this year, I always appreciated that 2010 run over the 2008 championship because I felt they proved more that season than they did when they hoisted the Larry O'Brien. In 2010, they fought the odds against Wade, Lebron, and Howard and were a quarter away from beating Kobe and raising #18, but I have to say that this season has been pretty special, too. It's possible that I'm being a little more sentimental because it could be our last with the Big Three, but it's also because this season has been such a grind and the team has shown so much character to get through it.

Look at last night's game. It was the second game of a back-to-back on the road and they were undermanned. Sure, it was against the lowly Bobcats, but games like this can't be taken for granted anymore. They jumped out to an early lead, but had to gut it out in the end. It was another grind and they had to make it ugly; they shot 45 free throws (Pierce, 18) and nearly every starter played 40 minutes. I wouldn't be surprised to see Ed Lacerte with a roll of duct tape at the next game. Running the veterans into the ground doesn't exactly sound like the best strategy to prepare for the playoffs, but we're still a team fighting to get in and we're going to be fighting for a while. Our next 8 games are all against playoff contenders. Half of them are on the road with Chicago, Philly, and Atlanta on the travelling day back end of a back-to-back. By April 11th, the playoff picture is going to be a little clearer and at that point, Doc can decide whether or not he wants to let up on the minutes and put KG back on the 5-5-5 plan.

I used to be in the camp that it might be better for the Celtics to face the Heat or Bulls in the first round rather than later in the playoffs because we'll be fresh and it's better to face those teams with some pep in our step, but now, I'm not so sure. Even if the games in the final two weeks are somewhat meaningless in terms of seeding, I want these guys still scratching and clawing for every win, rebound, and loose ball. No doubt a more rested Celtics team will be dangerous in the playoffs, but an edgy Celtic team will be even more. 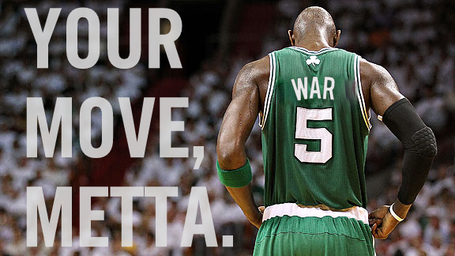