A Look at the Celtics' Draft History

Share All sharing options for: A Look at the Celtics' Draft History

The NBA 2012 Mock Drafts have been ebbing and flowing, and all Celtics fans want to know - just what will having the 21st and 22nd pick mean tomorrow? Well don't expect to find out until one or two years from now . . . especially with how Doc Rivers is reluctant to play rookies. That is of course if the Celtics are even going to make the picks instead of trade them.

Before looking at the Celtics draft history, it is interesting to note the summary provided by basketball-reference.com on the expected value of a draft pick. They analyzed the number of "win shares" each pick accumulated over their lifetime. Win Shares (WS) is simply a rating of a player's value to their team based on the player's contribution to the team's wins and losses from an analysis of the standard box score information. The curve below reflects the decline of average value with the later picks in the draft, and suggest that a mid-lottery pick (picks 5-10) is likely to be twice as productive as a player taken in the latter half of the 1st round (picks 20-30). 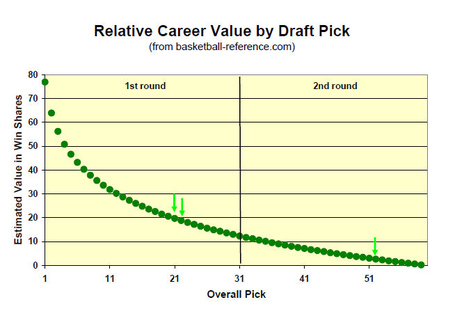 Looking to the future, it is not a stretch to predict that young Rajon Rondo, with 40.7 WS already, will be the best 21st pick ever - thank you Danny Ainge - and surpass Mike Finley's 85.2 WS for that draft spot. A breakdown of the Celtics success and failures at their various draft positions over the history of the franchise is provided after the jump.

No. 1: The Celtics haven't had a No. 1 pick since 1950 when they selected Chuck Share from Bowling Green State. However, Tom Heinsohn (1956) was taken as a "territorial pick" by the Celtics in lieu of their 1st rounder, and may be considered a quasi-No. 1 pick.

No. 2: Bill Russell (1956) was acquired in a draft day trade for Ed Macauley and Cliff Hagan - a draft that the Celtics forfeited their 1st rounder since they took the "territorial pick" and used it to take Heinsohn. Indeed, 1956 was a very good year for the Celtics, as not only did they take Russell and Heinsohn, but it also included a third future Hall of Fame guy with the selection of K.C. Jones as the 13th pick (2nd round).

Subsequent to the Russell trade, the Celtics' Len Bias (1986) has been the Celtics' only other No. 2 pick, and that story is full of heartache with Bias dying two days later of a cocaine overdose.

No. 3: Kevin McHale (1980) headlines a corp of No. 3's taken by the Celtics that includes Jim Loscutoff (1955) and Chauncey Billups (1997). Too bad Pitino didn't show some patience with that Billups fella, who got traded in his rookie year. As a caveat, Bob Cousy was taken by the Tri-Cities Blackhawks in 1950 with the No. 3 pick, but refused to report and the Celtics ended up signing him.

No. 4: Dave Cowens (1970) was taken after Bob Lanier, Rudy Tomjanovich and Pete Maravich were off the board. That was a good draft, and the Celtics hit it big with Big Red.

No. 5: Frank Ramsey (1953) began a mini-tradition of University of Kentucky players being drafted by the Celtics, followed by UK players like Antoine Walker, Ron Mercer and Rajon Rondo. Jeff Green (2007) was also taken with a 5th pick, but was immediately traded in the Ray Allen deal. Note that Kevin Garnett (1995), drafted by GM Kevin McHale and the Minnesota T-Wolves, is easily the best ever No. 5.

No. 7: John Havlicek (1962) is a best ever pick at No. 7 taken by the Celtics. Ainge's moving the 2006 No. 7 pick (Randy Foye) was a smart decision, especially where it allowed the acquisition of the Theo Ratliff trade chip that was later used to help acquire Kevin Garnett.

No. 9: Jo Jo White (1969) was one of two of Hall of Famers taken in the 1969 draft, the other Hall of Famer being the No. 1 pick, a guy that went by the name of Lew Alcindor once upon a time. In 1994, the Celtics got schooled by the Lakers when they took Eric Montross with the 9th pick and the Lakers took Eddie Jones with the 10th.

No. 10: Paul Pierce (1998) headlines yet another "best ever" pick made by the Celtics. Pierce easily outdistances other competitors taken at No. 10 including Horace Grant, Eddie Jones, and Jason Terry. The Celtics also drafted Paul Westphal (1972) and Joe Johnson (2001), but both these players were traded and had better years elsewhere.

No. 12: Cedric Maxwell (1977) was an excellent pick by the Celtics. Cornbread only trails Chet Walker and Dr. J in productivity as a No. 12 pick.

No. 13: KC Jones (1956) holds the post position for the Celtics No. 13 picks. Michael Smith (1989) and Marcus Banks (in a 2003 draft day trade) are the only other No. 13 picks made by the Celtics. Smith represents the draft day ho-hum selections that hounded the Celtics in the late 80's through the mid-90's (no offense to Dee Brown, Rick Fox, Jon Barry, Acie Earl and Eric Montross).

No. 15: Al Jefferson (2004) was an excellent draft pick debut for Danny Ainge, the new GM for the Celtics at the time, in a Celtics' draft which also netted Delonte West (No. 24) and Tony Allen (No. 25). No other 15s have been selected by the Celtics in the last 50 years.

No. 16: The Celtics have made the No. 16 pick 7 times and have come up empty-handed. Perhaps they understood No. 16 is jinxed for them, and that's why they traded their last 16th pick in 2003. They selected Marcus Banks (13th) and Kendrick Perkins (27th) while Troy Bell (16th) and Dahntay Jones (20th) were selected by the Grizzlies and their GM Jerry West in the 4 pick swap. If he counts, old friend Dana Barros (1989) was taken by Seattle at No. 16, and eventually found his home back in Boston.

No. 22: Reggie Lewis (1987) was a home run late in the 1st round by the Celtics, demonstrating that the Celtics can take a major haul at Nos. 21 and 22 if they have Lucky the Leprechaun sitting on their shoulder.

No. 25: Tony Allen (2004) headlines this slot for the Celtics. Marshon Brooks (2011) was selected, but turned into a No. 27 that became Jajuan Johnson and a 2nd rounder in 2014. The value of Johnson is to be determined, but I have high hopes for the Purdue alum.

The Celtics draft history wouldn't be complete without a glimpse at the 2nd round which is headlined with Danny Ainge being taken with the 31st pick in 1981. And now things get complicated as Doc Rivers (1984) was also a No. 31 pick. It just becomes too close of a call as to whether Doc or Danny is the best ever No. 31 pick - but it's definitely one of them. For comparison, both of them have more Win Shares (around 70 Win Shares each) than the likely soon to retire No. 1 pick Mike Miller (53.5 Win Shares).

As the Celtics also have the 51st pick, it's worth mentioning that as GM, Ainge has a great reputation for mining talent in the 2nd round. . . . So hold on to your seats for NBA Draft Day, with the 21st, 22nd and 51st picks currently in play for the Celtics. I hope you agree that some Rajon Rondo and Reggie Lewis magic would be terrific for the 21st and 22nd picks!