Share All sharing options for: Bidding Adieu to Ray Allen

More than Kevin Garnett or Paul Pierce, when the Big Three were united, it seemed Ray Allen made the biggest sacrifice. His traditional role as the go-to shooter on the Seattle Supersonics featured him taking a high volume of shots with unusual success. But in his 5 years with the Celtics, he averaged 7 less shots a game, which resulted in his scoring average dipping 8 points per game. Garnett and Pierce made sacrifices as well, but their roles just didn't change quite as radically as Ray's.

In more ways than one, Ray Allen was the unsung hero of the Big Three, especially during his first three seasons here. Ray Allen took the mantle of the quiet leader and was the starter that Doc Rivers typically chose to leave on the floor with the 2nd unit - the Celtics were rarely playing without either Pierce or Allen on the floor.

But the last two seasons have not been the same for Allen. Ray Allen is 37 years old now, and is obviously on the tail end of his hall-of-fame career. My favorite past-time has been to tout Ray as the Plus-Minus Leader for the Celtics, which he was during his first three seasons (2007-2010). But in his fourth season, the load became too heavy and there was seismic shift on the team, and then this past year, things just got even more difficult for Ray regarding his role on the team.

To illustrate the decline, a chart of Ray's basic plus-minus trend (net change in score when player is on versus off the court) over his career - and other goodies - are provided after the jump. 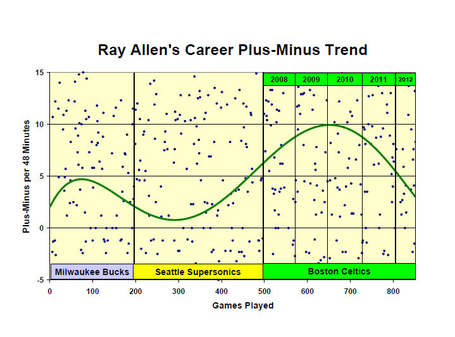 CHANGING OF THE GUARD

It's not that Ray's shooting declined, as we have seen him maintain overall stellar percentages over the course of his career. However, due to the recent bone chips in his right ankle, Ray Allen chalked up his career worst playoff performance ever this season. Allen had similar surgery on his right ankle in 2003. Recall that he also had ankle issues in 2007 when had bone spurs removed from his left ankle prior to being acquired by the Celtics.

While Ray was nursing his ankle injury in late March, we saw the Celtics go 5-1 and Avery Bradley take the shooting guard torch. Ray didn't reclaim his starting spot until Bradley eventually went out with his shoulder injury in the 2nd round playoff series. It was clear that with everyone healthy, Ray wasn't going to be a starter again with the Celtics.

The players and coaches will argue that injuries are part of the game, and it seems that the Celtics have not been able to spare anyone - young or old. But stepping back, one can see that Ray was slowly becoming less-involved within the offense two seasons ago. Over each of his five years with the Celtics, his touches have decreased, his shot attempts declined, his rebounds became fewer and his defense simply became inferior to the likes of Bradley.

To get a feel for Ray's decline compared to Rajon Rondo, Garnett and Pierce, the efficiency of the Big Four are displayed on two charts: adjusted plus-minus (APM) and the Net Rating (data from www.basketballvalue.com). 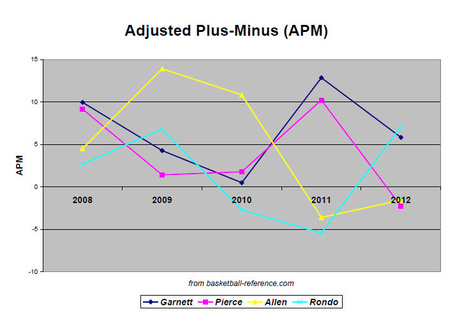 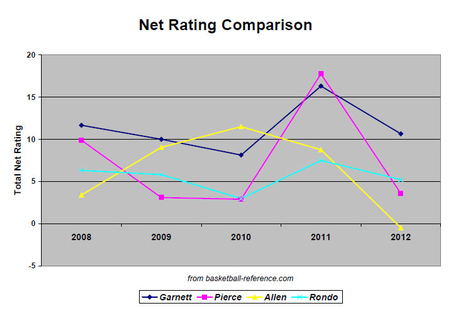 APM is explained in detail here and accounts for the bias in the basic plus-minus that results from one's team mates. The Net Rating is a combination of the offensive rating and defensive ratings for both on and off-court situations, and focus on points produced and defensive stops.

After leading the Celtics in APM in his 2nd and 3rd season, Ray Allen is the only one of the Big Four to have a negative APM the last two years. Pierces decline in APM last season is attributed to his knee injury which appeared to affect his ability to defend. As anyone that watches the Celtics can attest, Rondo's team leading APM last season signals a changing of the guard for this team.

The Net Rating comparison highlights the extent of Ray's weakness within the line-up. With a negative Net Rating last season for Ray, it begs the question if the team isn't actually better without Ray in the line-up. You know that isn't exactly fair, but Ray's decline was having a noticeable impact on his team contributions, and that made the decision to go with Avery Bradley as the starter that much easier for Doc.

A side note on the Net Ratings chart, the relatively spike that everyone enjoyed during the 2010-2011 can be attributed to the "Shaq effect" because that is what Shaq did for everyone. A healthy stud center along side the Big Four made the team that good, and one must be reminded of that when considering why the Celtics parted with Kendrick Perkins in the first place. A dominant center can do wonders for this team, and hopefully the Celtics can fortify the center position with someone in addition to Garnett's part-time role, which was full-time last season.

A NEAT FIT WITH THE HEAT

Since Ray can still shoot lights out with healthy ankles, he can fill in the one-dimensional hole in Miami that may be created with the potential retirement of James Jones and Mike Miller. Ray is simply the best fit for Miami and he knows that.

"Miami wanted Allen because of its ongoing quest to keep surrounding James, Wade and Bosh with shooters who extend defenses and therefore create room around the basket for the "Big Three" to attack. That approach worked perfectly for Miami in the playoffs - the Heat were 9-1 when making at least eight 3-pointers in playoff games (7-6 otherwise), and they hit 14 in the finals-clincher over Oklahoma City. . . . Allen has made an NBA-record 2,718 3-pointers."

Clearly the piece that Ray Allen brings most to the Celtics could not be valued the same as what he brings to the Heat. However, that didn't stop the Celtics from offering more than the Heat were able to monetary-wise, but Ray certainly knew he would retain his remaining value more with the Heat than the C's. He's going to be the guy that will bust the double-teams on their James, Wade and Bosh by being on the receiving end of kick-out passes.

Ray played a lot of games with Boston, Seattle and Milwaukee - and won a championship with Boston. Who knows how he will be received by the Celtics' fans, but I think from the above, you can see that the Heat needed Ray more than the Celtics, and Ray obviously felt that need. Ray is still a uber professional, and wants to contribute, and I think he could see the writing on the wall with the Celtics. Note that Jason Terry is not a replacement for Ray Allen - no one can be that - but the Celtics game plan is simply moving away from what Ray excels in.

Similar to many other fans, Ray will still be one of my favorite Celtics. He certainly was the most approachable and media-friendly of the Celtics's stars, and a class act through-and-through.

In closing, here are a couple of videos highlighting Ray, one being an ode to the sweetness of his jump shot during a then record-setting 2010 Finals Game 2 against the Lakers where he made his eight threes.

Correction: The charts on APM and Net Ratings were made from data provided by basketballvalue.com not basketball-reference.com