Christmas vs. Smith, Plug-And-Play vs. Specialist

Share All sharing options for: Christmas vs. Smith, Plug-And-Play vs. Specialist 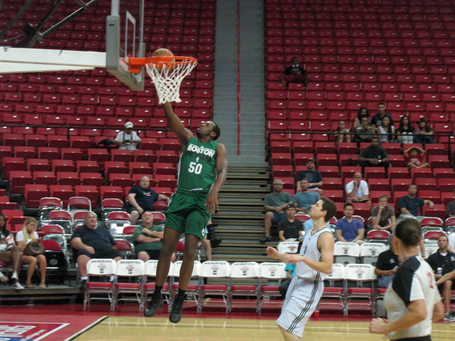 You're going to hear this term a lot from me in the coming weeks before training camp: "plug-and-play" players. They are guys that fit into any system because they can generate offense for themselves and for their teammates, finish at the rim or on the perimeter, and play defense. They're iPhones. They're Swiss Army knives. They're all-of-the-above.

For the last five years, Danny had surrounded the Big Four with more complimentary pieces rather than with these plug-and-play types. You need someone to hang around the perimeter and space out the court so KG can work the paint? Put in Eddie House for the occasional 3. You need a guy to play intense D on the other team's best scorer but not be relied on to provide anything offensively? Have Tony Allen guard Kobe. In a lot of ways, even Ray Allen and Kendrick Perkins were complimentary players too, guys with very specific skill sets that were less rounded than say Pierce, Garnett, and Rondo.

This off-season, however, was a departure from Danny's MO of finding specialists. Instead, he focused on these plug-and-play type players. With Jason Terry, Jeff Green, and Courtney Lee, you get an influx of guys that are threats all over the court, on defense and on offense. Maybe they can't shoot like Eddie House or defend like Tony Allen, but they're going to give you more at all facets of the game rather than just a few. And if we're assessing players like that all the way down to the 15th man on the roster, Dionte Christmas will win the camp battle over Jamar Smith (and Rob Kurz).

At this point of their careers, Dionte is just a more complete player than Jamar. In summer league play, Christmas averaged a robust 13.2 points, 5.3 rebounds, 3.1 assists, and 1.8 steals to Smith's 9.7-1.8-1.5-1.0 stat line. Most of Smith's shots came from behind the arc, where as Christmas scored from a variety of spots and went to the line more consistently. Dionte is also a bigger, more rugged defender and a more natural leader at the point guard position. We can qualify his performance by saying it was "just the summer league," but he's undeniably a baller, a plug-and-play guy that will find ways to contribute somewhere on the court.

After a game against the Magic, I wrote:

I'm not sure how it works in terms of summer league invites and any proprietary rights to players who aren't under contract by the team, by Dionte Christmas may have played himself into a camp invite today. He's been solid all week but today's 21-5-4 performance may have solidified a spot for Vegas and possibly training camp in October. He had one sick behind-the-back pass to Melo on the break that we'll see on summer league highlight reels whenever NBATV runs summer league highlight reels. He's another one of those players that fits the E`Twaun Moore/Kris Joseph mold: not necessarily a great athlete, but show's a keen understanding of the game and can score from anywhere on the floor.

He's been a fringe NBA player with appearances in summer leagues the last three years and has played professional in the Czech Republic, Greece, and Israel. He's got a great story and as much as I'd love to see him in training camp, realistically, he'd have a better shot at making on another team. With potentially five rookies and sophomores already on the roster, I doubt Danny uses another spot for another project.

Now, that was all before the trade for Courtney Lee that sent E`Twaun Moore, JaJuan Johnson, and Sean Williams to Houston and Sasha Pavlovic to Portland. But even with all that player movement, Dionte's goal to make the team is still an uphill battle. With five guards ahead of him (Rondo, Bradley, Lee, Terry, and Dooling), he's trying to make the Final 15 as a 6th guard. Ultimately, he won't be gutting out training camp to necessarily be a contributor this year. He needs to play the long game and impress Doc and Danny enough to stash him away in Maine and keep him in the Celtics system. Consider this: when the Celtics acquired Lee, they gave up three 2013 second-round draft picks; next summer, they'll only have their own first rounder. And outside of the Reverend, the Celtics don't have a pure back up point guard. Dooling's playing on a one-year veteran minimum and will be 33 by the end of season. This all has to be on Dionte's mind. He's toiled in international ball for years and at 25, this could be his last chance to make it in the NBA. If he can build on the potential that he showed in Orlando and Las Vegas, his contract could go from non-guaranteed to guaranteed and he could very well be a Celtic in 2013 as well.

For what it's worth, it looks like he's really embracing the opportunity. He's found a mentor in Jason Terry and is already getting comfortable with the Boston sports scene:

Got my Redsox jacket on Reppin lol...still a phillies fan tho twitter.com/Dchristmas22/s…

After taking in a game at Fenway, Christmas and Terry went back to Waltham for another late night workout in the basketball lab. It's great to see that he's not resting on his laurels. On October 30th, I'm sure he'll gladly trade in that Red Sox jacket for Celtics' green.