The Celtics host the Charlotte Bobcats as they look for their longest win streak since December of 2010.

The Celtics win streak has been keyed by the return of Avery Bradley, and with him, a return of the Celtics lock down defense. With the roles being better defined, the second unit has also played a part with Courtney Lee providing some tough defense and clutch shooting and Jared Sullinger crashing the boards and playing tough inside. Jeff Green has been more aggressive. Jason Terry's shot is still inconsistent but he's a scorer and this could be the game where the shots start to fall again. 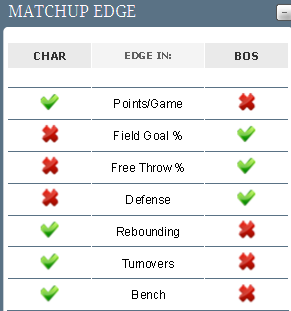 Kemba Walker returns to New England where he won a lot of fans playing for UConn. Walker is averaging 17.6 points, 5.8 assists and 3.4 rebounds per game. Rondo loves big matchups and so should give Walker all he can handle in this one.

KG has been playing very well and also has a couple of inches on Biyombo who is averaging 4.8 points, 6.9 rebounds and 1.6 blocks. Biyombo is a good defender and bothers a lot of shots inside, but with KG's size, he should be able to get his shot off over Biyombo.

Gerald Henderson has shot the ball well against the Celtics in the past, scoring 43 points while shooting 19 for 33 (57.8 percent) from the field in the last two meetings. It will be up to Avery to slow him down in this one.

Defense - The Celtics have been winning with tough defense. They need to continue to make defense their top priority. Defense wins games and it wins championships.

Rebound - Good things happen when the Celtics crash the boards. When they show energy in rebounding, that energy spreads to other areas of the game. They prevent second chance points and fast break baskets by grabbing the rebounds as well. The Celtics need to swarm the basket as a team.

Be Aggressive - When the Celtics are the more aggressive team they usually win. They need to be aggressive going to the basket, grabbing rebounds, and hustling after loose balls and, especially, on defense. This goes for the Celtics as a team and for each player individually.

Bench Play - The Celtics reserves have been playing very well during the win streak and have outscored their opponents' counterparts 67-41 in their last two games. The Celtics need the second unit to continue to bring energy and outplay the opposing reserves to allow the starters to be fresh at the end of the game.

This is a game that could very easily become a trap game against a team with a losing record and only 9 wins. The Celtics have 5 wins in a row, 4 of which came against teams above .500. They could easily let down their guard and play down to the competition. But this would be a mistake because in spite of their record, the Bobcats play hard and any team not ready for them could be in for a loss. Hopefully they come out strong and keep their focus and we have Gino time at the Garden again.

The Celtics are 0-1 this season and 4-6 in their last 10 games with Washington on the court. In a loss to the Pistons last season, Detroit shot 46 free throws to 15 for the Celtics, Rondo was ejected, and Tommy Heinsohn called it the worst officiated game all season (are you cringing yet?). In Game 2 vs the Heat in last season's, the Heat shot 47 free throws to 29 for the Celtics, in spite of the Celtics attacking the basket all night. There were bad calls throughout the 4th quarter and OT. The missed call where Wade hit Rondo on the head leading to a Heat layup was one of the worst. Pierce, Pietrus, and Dooling all fouled out. LeBron was given 24 free throws all by himself. The loss this season was at Houston where the Celtics shot 17 free throws to 23 for the Rockets and the officiating wasn't bad. The Bobcats are 0-3 this season and 1-9 over their last 10 games with Washington on the court. His home W/L record this season is 17-14.

Adams tends to be inconsistent especially on charge/block calls. He is one of Tommy Heinsohn's least favorites. In one game, Tommy went ballistic yelling at the top of his lungs "GO BACK TO YOUR MOMMA BENNIE ADAMS!!!" This is Adam's third game with the Celtics this season and they are 1-1 in them and 5-5 in their last 10 with Adams on the court. In spite of Tommy's dislike of Adams, the 4 games he officiated for the Celtics last season were all called fairly even. Both games this season were well officiated. The Bobcats are 0-1 this season and 3-7 in their last 10 games with Adams. His home team W/L record this season is 19-12.

Scott Twardowski officiated 42 regular season games in his first year on the staff. Twardowski’s experience includes six seasons and 206 games officiated in the D-League. He also has four seasons of NBA preseason game experience and worked in NBA summer camps for eight years. He also has seven seasons of WNBA experience, working both the All-Star game and Finals. In addition to his professional experience, Twardoski officiated collegiate games for 12 years in the Pac 10, Big 12, Big Sky and West Coast Conferences and has 10 years of high school officiating experience. Twardoski worked as a teacher for five years in the 16th School District, Covington, AZ.

He has called only 3 games for Boston over his career: a win in Cleveland, a win vs Orlando in which Orlando took 30 free throws to 19 for the Celtics, and a loss at Sacramento in which the officiating was uneven, all last season. This is his first game for the Celtics this season. Charlotte is 0-4 all time with Twardoski on the court. His home W/L record for this season is 15-7.