The Celtics try to get back on track as they host the Chicago Bulls.

Share All sharing options for: Celtics look to get back on track as they host the Bulls

he Celtics try to get back on track as they host the Chicago Bulls. This is the third of 4 meetings between these two teams. They split a pair of games in Chicago with the Celtics winning on 101-95 and the Bulls pulling out the other 100-89. They will meet one more time in Boston on February 13.

Although Derrick Rose is rumored to be getting closer to a return to the active roster, he still isn't cleared for full contact. Avery Bradley injured his ribs against the Hornets and didn't practice on Thursday. His status for this game will probably be a game time decision. Luol Deng is also a game time decision with a hamstring injury. The Bulls are a good road team with an 11-5 record while the Celtics have been playing well at home with a 13-7 record, in spite of pitiful effort they brought against the Hornets in their last game there.

The Bulls are coached by former Celtics assistant and defensive guru, Tom Thibodeau. It follows that they hang their hat on their defense. They are 3rd in the league in points allowed, giving up just 91.73 points per game on 43.0% shooting. The Celtics recent improved defense has moved them up to 7th, allowing 95.71 points per game on 44.6% shooting.

The Celtics are looking to begin another win streak after their 6 game win streak was snapped by the Hornets in their last game. The Bulls have won 2 in a row and are looking for their 3rd straight. The Celtics need to play a lot better than they did against the Hornets if they expect to get a win in this one. 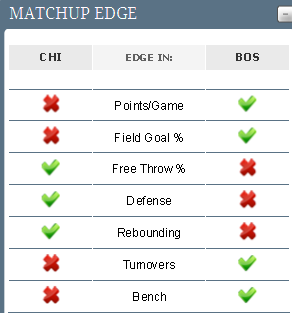 Noah brings a lot of energy to the Bulls and he is a presence in the paint. KG has to match his energy. In the past, Noah has been able to get to the basket at will for rebounds and tip ins. He is also blocking 2.03 shots a game. In the last meeting between these two teams, Noah finished with his second career triple double. KG has got to box him out and defend the paint. This might be a good game for Doc to give Collins some run if Noah starts to go wild inside.

Rondo and Hinrich have history together going back to the 2009 playoffs when Rondo shoved Hinrich into the scorer's table and the 2 got into a skirmish. Rondo has a speed advantage on Hinrich but Hinrich is a good shooter and so Rondo will need to stay with him on defense.

Pierce and Deng are always a fun matchup to watch. Deng is long and a very good defender and has been able to bother Pierce in the past. He will make Pierce work for his points. Deng has also been shooting well and is scoring 17.8 ppg and in the past has put up some big games against the Celtics.

Rebound - The Celtics are once again last in rebounding, grabbing just 38.71 per game while the Bulls are 7th with 43.68 rebounds per game. The Celtics have to box out and keep Noah from getting easy tip ins and to keep the Bulls from piling up the second chance baskets. The Celtics have got to crash the boards as a team. rebounding takes effort and every player has to put out that effort.

Defense - Defense has been the Celtics strength in recent years. It has also been a strength for the Bulls. The Celtics defense finally showed up with the return of Avery Bradley and other than the Hornets game has been solid since his return. The Celtics need to match the defensive intensity of the Bulls and even exceed it if they want to come out of this game with a win.

Be Aggressive - It's no secret that the more aggressive team gets the calls and usually the win. The Celtics must start out being aggressive and that starts with Rondo. They have to be aggressive on the boards, in defending, in going after loose balls, and especially in getting inside to the basket instead of settling for outside jumpers.

The Celtics obviously weren't focused in their last game against the Hornets. They shot 37% from the line and the only explanation for that has to be a lack of focus. They also didn't move the ball or play Celtics defense. They have to come into this game more focused, or they may be facing a 2 game losing streak. Marc Davis, a known Bulls fan is the lead official for this game and last season cost the Celtics a couple of games along with tossing Rondo for bumping him. It's always a toss up whether Davis will call it fair or not.

Marc Davis has been an NBA official for the past 15 seasons, working 851 regular season games and 43 playoff games, and the 2007 NBA All-Star Game. Davis officiated his first two Finals games during the 2010- 11 season. In addition to his NBA experience, Davis has three years of CBA officiating experience and three years of collegiate basketball officiating experience in the OVC and TAAC Junior Colleges. In 2000, Davis was the recipient of the Honorary Nate Humphries Award, an honor given by the Chicago Public League Coaches Association in recognition of enshrinement of an official into the Chicago Public League Hall of Fame.

Davis was investigated for threatening to whoop Allen Iverson's a** when AI complained about a call in a game in 2005, but was not suspended for it. In 2009, Davis was seen after a Celtics/Bulls game with his family all decked out in Bulls gear. Can a Bulls fan honestly call a Celtics game without any bias, especially one against the Bulls?

The Celtics are 1-2 this season including a win over the Knicks in the preseason and a loss at Milwaukee and the 3rd loss at the Clippers. They are 5-5 in their last 10 games with Davis on the court. One loss last season was a 1 point loss to the Cavs in which Davis and friends ignored a very obvious foul committed against Paul Pierce in the final seconds of the game and in which the Cavs shot 20 free throws to 14 for the Celtics. In a win against the Hawks last season with Davis the officiating was terrible. The Hawks shot 23 free throws to 13 for the Celtics. KG fouled out in that game on a terrible call. They were holding his jersey and had an elbow in his back and they called the foul on KG. Stiemsma fouled out shortly after on two more terrible calls. In the 4th quarter, 12 fouls were called on the Celtics and only 4 on the Hawks. In OT, 4 fouls were called on the Celtics while none were called on the Hawks, even through there were several very obvious fouls committed. Donny Marshall usually doesn't comment on the officiating but said that the Celtics needed to send the tape of this game to the league because Davis made it all about him. Davis also called Game 1 of the Hawks series last season. There were missed and bad calls the entire game. At one point, the ref at half court called an obvious foul on the Hawks when Davis, right next to the play, failed to call it. The frustration over the lack of calls boiled over and resulted in Rondo bumping Davis and being ejected.

Eli Roe has officiated 390 regular season games during his first seven NBA seasons. Prior to joining the NBA staff, Roe officiated in the CBA, NBA Development League and WNBA. He officiated in the NBA D-League Finals for two years, the D-League playoffs for four years and the WNBA Playoffs for two years. At the collegiate level, Roe refereed in the SEC, ASUN and OVC conferences and numerous Division II and III, NAIA and Juco league games. He also worked in four Division I postseason conference tournaments.