The Celtics welcome old friend Tony Allen and his Grizzlies to the Garden as they try to get back on track after a 1-3 road trip.

The Celtics welcome old friend Tony Allen and his Grizzlies to the Garden as they try to get back on track after a 1-3 road trip. The Celtics have lost 3 in a row to Western Conference teams and return home hoping to turn that trend around. The Celtics have played well at home with a 9-5 record while the Grizzlies are just 6-6 on the road.

The big news for the Celtics is that Avery Bradley is expected to make his season debut in this game. Doc has said that if he is ready, he would start him and I'm optimistically putting him in the starting lineup. That allows Jason Terry to come off the bench where he is more comfortable.

The Celtics are still trying to find their identity and after 3 terrible losses on the West coast they face a Grizzlies team that is also searching for answers. Both teams have lost 3 of their last 4 games. The Memphis Grizzlies have turned in three straight efforts of fewer than 90 points for the first time this season. Both teams have been very inconsistent and so it's anyone's guess how this one will turn out.

Rajon Rondo sat out practice on Tuesday and is questionable for this game and will more than likely be a game time decision. The Celtics should get a boost from Bradley's return and hopefully his on the ball defense will help the Celtics sagging team defense. The Celtics are 2 games under .500 and are just half a game ahead of the Sixers for the 8th seed in the East. They need to find answers and turn their season around soon. Hopefully it will be in this game. 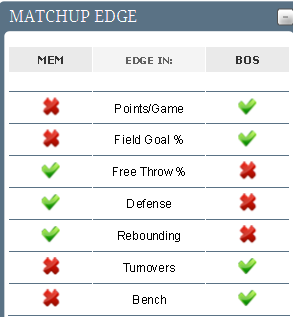 The matchup between the Celtics bigs and the Grizzlies bigs will be key in determining the winner. The Grizzlies are strong where the Celtics are weakest and that is in the middle. I expect KG to cover Gasol and Collins to cover Randolph because he is so physical that he'd be a tough cover for KG.

Rondo is listed as questionable with the hip/thigh bruise that he suffered in the Clippers game. Hopefully he will be able to go. Conley is a good PG and is averaging 2.44 steals a game and could give the Celtics problems, especially if Rondo can't go. `

Gay is a very good young player and Pierce will need to play him aggressively on the defensive end as well as make him work by being aggressive on the offensive end.

Defense - The team that works hardest on defense will be the team that wins. The Grizzlies are a good defensive team and will limit the Celtics' easy looks. The Celtics will need to match their defensive intensity if they want to win this game. In the Celtics wins they are holding teams to 89 points per game. In their losses, they are allowing 101 points per game. When they bring their defensive intensity they win and when they don't they lose. It's that simple.

Rebound - Rebounding is very important in limiting fast break points and second chance points for Memphis. The Grizzlies are very good at getting second chance points off of offensive rebounds and putbacks with Randoph and Gasol playing inside. The Celtics must be aggressive in crashing the boards. The team that wins the battle of the boards usually wins the game.

Take Care of the Ball - The Grizzlies are among the best in the league in forced turnovers and steals and they are also very good at scoring off those turnovers. The Celtics must take care of the ball and avoid careless passes and lapses in focus or the Grizzlies will make them pay. Rondo must especially concentrate on his passes and ball handling as Conley averages 2.4 steals a game.

Be Aggressive for 48 Minutes - When the Celtics are passive and settle for jumpers and don't swarm on defense they end up in trouble.

The Celtics need to come out strong and play aggressively until the final buzzer. They can't allow the Grizzlies to build a lead because their defense will make it difficult to come back.

Avery Bradley's return should give the team a boost, but if Rondo can't go, it could cancel out any benefits they get from Bradley's presence. Hopefully both are ready to go and will play well.

Here is Joey at his best - Making the game all about himself:

The Celtics are 2-0 this season and have a 9-1 record in their last 10 games with Richardson as a referee. The last game he officiated last season for the Celtics was an OT win over Atlanta that was horribly officiated. KG fouled out on a terrible call where the Hawks were holding his jersey and elbowing him in the back and they called the offensive foul on KG. Stiemsma also fouled out with the 5th and 6th fouls coming within seconds of each other and were terrible calls. 12 fouls were called on the Celtics in the 4th quarter to just 4 on the Hawks. In OT they called 4 fouls on the Celtics and none on the Hawks. In an uncharacteristic show of emotion from Danny, he said after the game that he would be sending the tape of the game to the league office because the officiating was so bad. In a win over the Blazers this season, Portland shot 37 free throws to just 20 for the Celtics. He also called the Celtics Christmas day win over the Nets in which the Nets took 29 free throws to just 13 for the Celtics. The Grizzlies are are 4-6 in their last 10 with Richardson and 1-1 this season. His home W/L record this season is 16-11.

James Williams enters his third NBA season having officiated 107 regular season games. Williams owns 10 years of experience in the collegiate ranks, having officiated for the NCAA from 2001- 2010. He also officiated two seasons in the WNBA, and has worked two NBA D-League Finals as well as the 2009-10 NBA D-League All-Star Game. He was called up from the D-League last season. He has officiated 9 total games for the Celtics in his career, in which the Celtics are 5-4. The Celtics are 1-1 this season with Williams on the court. The Grizzlies are 5-5 in their last 10 games and 1-1 this season with Williams. His home W/L record is 9-9.