The Knicks visit the Celtics for round 2 of 4 between these two division rivals.

The Knicks visit the Celtics for round 2 of 4 between these two division rivals. Whenever these two teams get together there is always a playoff atmosphere, even in the preseason. It seems that they are always on the verge of a brawl. Every game is hard fought, that is for certain.

There was no shortage of drama between them in their last meeting as KG inspired Carmelo Anthony to chase him into the locker room and then wait for him outside the Celtics' bus. Anthony has said that he is fine with KG and that he's only looking forward to the game. He blamed fasting for being so testy in that last meeting. Hopefully he has his pregame meal before this one, but don't count on KG not trying to get into his head again.

The Celtics can once again get back to .500 with a win in this game. Doc called the team out after the loss to Detroit but it didn't do any good as they lost to the 10 win Cavs in their next game. The Celtics have proved that they can beat the top teams and they have plenty of motivation to play well and win this game. The big question is whether they will come out focused and put out the effort needed to do so. 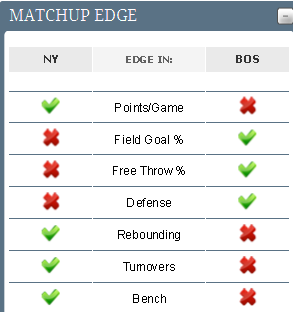 Yes, I know that KG is a power forward and Anthony is a small forward, but KG covered Melo for parts of the last game and took up residence in his head. Melo insists that it's all in the past and he has moved on and he has nothing against KG. I can't see KG being able to resist trying to get into Melo's delicate psyche again. The key will be whether Melo allows him to.

Shumpert is back from his ACL injury and is a very good defender. He will do his best to make everything as difficult for Rondo as possible. The Celtics need Rondo to set the pace and to keep the offense moving.

Rondo tends to get up for the big games and the Celtics will need him in this one.

Kidd is averaging just 8.3 points per game, but he has a way of hitting big shots against the Celtics. Avery was feeling a bit stung after Kyrie Iriving scored 40 on the Celtics in the last game and I expect him to come out fired up in this one.

Defense - The Celtics have to make defense their priority in this game especially because the Knicks can be a very dangerous offensive team. Whatever needs to be fixed for the Celtics to get back on track must begin on the defensive end. The Celtics must especially guard the perimeter as the Knicks are 4th in the league in 3 point percentage at 38.5% and they aren't shy about shooting them. But they also have to guard the paint because the Knicks have several players who can take it strong to the hoop as well.

Rebound - The Celtics are no longer last in the league in rebounding. The Heat have taken over that distinction. The Knicks aren't much better, coming in at 26th. The Celtics have got to crash the boards as a team and win the battle on the glass if they want to win this game. When they put out the effort on the boards, they usually play better all around.

Focus - The Celtics have got to come out focused and play as a team. They have been missing a lot of free throws lately and that's usually a sign of lack of focus. The Celtics have to stay focused throughout the game and not let up if they get a lead or fold if New York makes a run.

If the Celtics play as a team like they did in first game against the Knicks, they stand a good chance of winning this. If they play a disjointed game as they have in their last two games, it could get very ugly. In the Knicks games I've watched this season, they got a lot of help from the officials. Hopefully they call a fair game in this one. It's hard to win playing 5 on 8. Also, the refs may call this tight given the history between these two teams. With both Joey Crawful and Knick Bavetta on the job, the officiating could definitely be a factor. The Celtics must adjust to the way the game is called.

Here is Joey at his best - Making the game all about himself:

He was left off the playoff roster the last two seasons and there were rumors of a forced retirement but here he is back again for another season. In his off time, Bavetta doubles as the Crypt Keeper. The Celtics are 3-0 this season and 7-3 in their last 10 games with Bavetta on the court. One win this season was in OT over the Magic in which the teams were allowed to play and both teams took 19 free throws. The other was a 92-79 win over Philly where the Sixers took 16 free throws to 12 for the Celtics and the refs again let them play. The 3rd game was the first game against the Knicks in which Bavetta was terrible. Twice Tony Brothers made a call from across the court when Bavetta was right next to the play and didn't call it. In that game, the Celtics had Tony Brothers as head ref to help even out the Bavetta effect but in this one, I wouldn't count on Joey Crawford to do the same. The Knicks are 1-1 this season, with the loss being to the Celtics, and 8-2 in their last 10 games with Bavetta. His home W/L record is 19-9.

The Celtics 5-5 in the last 10 games with Kogut calling the them. In one loss last season to the Lakers that Kogut called, the officiating was terrible and LA shot 20 free throws to 5 (yes, FIVE) for the Celtics. They are 1-0 this season with Kogut. The win was vs Indiana and the refs let them play in the fist half and then called it tighter on the Celtics in the second half with the Celtics ending with 18 free throws to 28 for the Pacers. KG was called for a flagrant 2 and was ejected, which was later downgraded by the league. The Knicks are 2-0 this season and 5-5 in their last 10 games with Kogut as a ref. His home W/L record this season is 13-10.