Celtics begin life without Rondo as they look to avenge earlier loss to the Kings.

Share All sharing options for: Celtics host Kings as they begin to explore point guard by committee

The Celtics will host the Sacramento Kings in their first game after learning they will be without Rondo for the rest of the season. There has been some talk of Keyon Dooling possibly returning to the team and in the meantime, they will stick with a point guard by committee. Expect Paul Pierce, Jeff Green, Avery Bradley, Courtney Lee, Leandro Barbosa and Jason Terry all to share ball handling duties. Doc will probably simplify the offense a bit without Rondo to call the plays on the court.

This is the second of 2 meetings between these two teams. In the first meeting in Sacramento, the Celtics gave a very lackluster performance. Rondo was outplayed by Isaiah Thomas. DeMarcus Cousins logged his first career triple double. And, most importantly, the Celtics lost 118-96. They will look to avenge that loss as they take them on at home.

The Celtics have won 4 in a row in Boston vs the Kings. Both teams are looking for their second straight win and both teams are 4-6 in their last 10 games. The Celtics are 14-9 at home while the Kings are 5-17 on the road.

Without Rondo, the Celtics should take on a different look. Lee and Sullinger will remain in the starting lineup with Pierce, KG and Bradley. Even without Rondo, if the team gives the same effort they did against the Heat, they should get a win in this one. 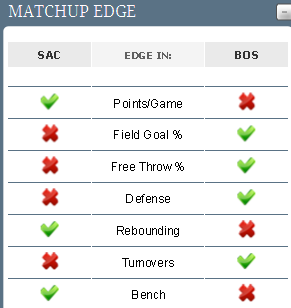 Evans is an explosive player and Lee needs to play tough defense on him. Hopefully, Courtney will continue to be as aggressive on both ends of the court as he was in the Heat game.

Cousins is a tough and physical player but he's also a young player and a volatile player. Who knows what would happen if KG gets into his head. In spite of 3 suspensions already this season, he is a big part of the Kings' game plan and he is averaging 17.6 points and 10.4 rebounds. KG has to do a better job of guarding Cousins than they did in their first meeting when Cousins recorded his first career triple-double (12 points, 10 rebounds, 10 assists).

In the first game between these two teams, Isaiah Thomas outplayed Rondo and finished with a game high 27 points on 10-15 shooting to go with 4 rebounds and 5 assists. In the Kings' game vs the Wizards on Monday, Thomas scored 10 of his 22 points in the 4th quarter, including a game winning floater with 1 second left. Avery has to stay in front of Thomas and limit his production.

Defense - Defense is a key to every game and it will be the key to winning the championship. The Celtics must defend the perimeter as the Kings can be hot from the outside. They also must defend the paint to keep them from getting tip ins and easy baskets.

The Celtics have had a few days to digest the fact that they will be without Rondo for the rest of the season. After practice, Doc said that everyone will need to step up to fill the void that Rondo leaves with his absence. Pierce and Jeff Green will need to handle the ball more along with guards Bradley, Barbosa, Lee, and Terry. How well they do that and how quickly will tell a lot about this team and how the rest of their season will go. Who knows, it may go even better with more ball movement.

Bennett Salvatore has been an official in the NBA for the past 30 seasons, and has worked 1,684 regular season and 203 playoff games including 25 NBA Finals games. The veteran official has also worked the 1993 and 2002 NBA All-Star Games, the 1993 McDonald’s Championship in Munich, Germany, and the 1997 Mexico Challenge. Prior to joining the NBA, Salvatore spent two years officiating in the CBA, and also has 10 years officiating high school. Salvatore missed the entire 2011-12 season with an injury.

Salvatore may just be the worst ref in the league, and that is saying alot. Almost always one team or the other gets an advantage when he is officiating and I'll give you a hint, it usually isn't the Celtics.

Another of Salvatore's "butchered" calls was in the 2008 conference finals when he waved off a contested 3-pointer that Paul Pierce had hoisted over Richard Hamilton, inducing him to leave his feet with a ball fake and land on Pierce's back. Pierce, however, was charged with an offensive foul for creating the contact with Hamilton.

Violet Palmer, one of the first two female officials in the NBA, has officiated 798 regular season games and has appeared in nine playoff games over the past 15 seasons. Before joining the NBA, Palmer officiated in the WNBA during the league’s inaugural season, including the 1997 WNBA Championship. She has two years of CBA officiating experience and nine years of collegiate officiating experience, including women’s games in the Pac-10, Western Athletic, West Coast, Big Sky, and Big West Conferences, as well as five NCAA Final Fours and two NCAA Championship games. Before becoming an official, Palmer was a successful basketball player both at the collegiate and high school levels. She was a four-year letter winner at Cal. Poly Pomona, where her team won the NCAA Division II Finals in 1985 and 1986. In addition, she was on the basketball team at Compton High School. Off the court, Palmer is a CCA Manual Mechanics committee member. She also is involved with the City of Los Angeles Youth Referee Clinic in her hometown of Los Angeles. Palmer also acts as a coordinator for both the West Coast Conference and the Pac-10 Conference.

At one time Violet was the worst ref in the league. In one game Cedric Maxwell was moved to urge her to go back into the kitchen because her calls were so bad. She has had Tommy close to exploding many times as well. She's improved a lot over the years and is no longer the worst ref in the league (that honor goes to Bennett Salvatore, who is the lead official in this game) but she's still not a very good ref. Although, after getting a hug from Pierce after he ran into her in a win over the Pacers last season, the Celtics took 20 more free throws than the Pacers.

Derek Richardson has officiated 906 regular season games and one playoff game, as well as the 2003 NBA Rookie Game in Atlanta, during his 15 seasons as an NBA official. Prior to joining the NBA, Richardson spent eight years officiating in the CBA, including the 1996 CBA All-Star game and two games of the 1996 CBA Finals. Richardson played basketball at Los Angeles Southwest College and earned an Associate of Arts degree in Criminal Justice. He went on to earn a degree in Administration of Justice from Los Angeles Dominguez Hills. Richardson has volunteered with the South Central Los Angeles YMCA, assisting with youth basketball programs.