The Celtics host Gerald Green and the Pacers as they look to get back on track and snap a 4 game losing streak.

Share All sharing options for: Celtics look to get back on track vs Gerald Green and the Pacers

The Celtics host Gerald Green and the Pacers as they look to get back on track and snap a 4 game losing streak. This is the first of 3 meetings between these two teams this season. They will meet once more in March and once in April. Last season they split the series, with each team winning 2 games. The Celtics won the last two meetings.

These two teams have been going in opposite directions. The Pacers have been playing very well and have won 2 in a row and 8 of their last 10 games. They are 1st in the Central division and 4th in the East. On the other hand, the Celtics have lost 4 in a row and have won just 2 of their last 10 games. They have slipped to 4th in the Atlantic, just 2.5 games ahead of the Raptors. They have also slipped out of the playoff race, just behind the Sixers who are in the 8th spot.

Danny said in an interview that Doc is going to shake things up and that with Avery back, we now have the lineup from last season that played so well together.

"This will be the first game coming up against the best defensive team in the league right now in [the] Indiana Pacers where we have our best lineup that played last year, and that was with Rondo and Avery and Brandon and KG and Paul. That lineup hasn't even played one minute together this year, so I'd like to give that a shot."

I originally went with Collins at center, which is posted in the game notes. But after reading Danny's comment, I'm thinking we may see Brandon back at PF and KG moving back to center for this game. I like it. Hopefully Doc will too. Personally I think Sully would be better with the starters because he gives us an inside presence that this team is very much lacking. But Collins at center obviously hasn't been working and moving Bass to the starting lineup is at least a move in the right direction.

The Celtics are 9-6 at home, in spite of the loss to the Grizzlies there in their last game. The Pacers have struggled somewhat on the road with just an 8-10 record away from Bankers Life Fieldhouse. The Celtics have got to find a way to get back on track and hopefully this will be the game that they figure it out. Otherwise, they will have their 5th straight loss and a lot of panicking fans. 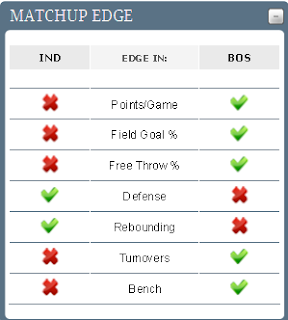 As with the Grizzlies, the Pacers are strong where the Celtics are thin. West and Hibbert are a formidable frontcourt duo with West averaging 17.8 points, 7.9 rebounds and 1.0 blocks per game and Hibbert adding 9.6 points, 8.0 rebounds and 2.7 blocks. Danny hinted that Doc may shake things up and return to the starting lineup that brought the Celtics success last season. We stand a better chance with Brandon on West and KG on Hibbert.

Rondo should have the upper hand in this matchup. Augustin averages 4.2 points, 2.6 assists and 1.0 rebounds. Rondo is still feeling the effects of the hip injury but hopefully he will be aggressive in this one. George Hill is listed as day to day and it's possible he may be back for this game as well. In that case, things get much harder for Rondo and for the Celtics.

Pierce's normal adversary, Danny Granger, is out with a knee injury but things don't get any easier for the Captain with Paul George in his place. George is playing very well and averaging 16.9 points, 7.3 rebounds and 3.7 assists. Pierce will need to work on both ends of the court in this game.

Defense - The Celtics have shown in spurts that they are still capable of playing tough defense but, often, as in the Grizzlies game, when they play good offense, their defense is terrible and when they play good defense, their offense disappears. They must find a way to play aggressive, in your face defense for 48 minutes. Until they do, the team will continue to struggle. Having Bradley back will help, but every player has to commit to playing tough team defense.

Rebound - Winning the rebounding battle prevents second chance points and tip ins for the Pacers as well as limits fast break opportunities. The Pacers are 5th in the league with 45.5 rpg. The Celtics must put out extra effort to keep the Pacers off the boards as they are very good at getting tip ins and 2nd chance points. Without a lot of height, the Celtics must gang rebound with everyone putting out extra effort. When the Celtics put out the effort on the boards, it often translates to other areas of the game as well.

Ball Movement - There have been times when the Celtics' ball movement is a joy to behold. Then there are other times when you just scratch your head and wonder what they are doing. They can't lapse into playing one on one and playing hero ball and expect to win the game. They also can't get sloppy and make unforced turnovers. They need to run more and try to get easy baskets instead of walking the ball up and letting the defense get set before they set up a shot. that is particularly true of Indiana's top rated defense that is allowing a stingy 90 points per game.

Be Aggressive - The Celtics need to bring some hustle and effort to the game. They have to go after loose balls and chase down rebounds. Too many times we see Celtics standing around while the other team out hustles them for the ball. They also have got to get into the paint more instead of settling for jumpers that aren't falling.

The Celtics have lost 4 in a row and have struggled to find any consistency. They have to pull together as a team and find a way to fix the problems that have been plaguing them. It will take effort from every player on the team to fill their roles and bring out that pride in playing well as a team.

The son of former NBA official James Capers Sr., James Capers has officiated 1,015 regular season games and 54 playoff games during his 17-season NBA career. Capers made his first NBA Finals appearance during the 2011-12 season. In addition to his NBA experience, Capers has six years of CBA officiating experience, including three CBA Finals and two CBA All-Star Games. The community-conscious Capers was the recipient of the 1998 Monarch Award as Chicago Sportsman of the Year for his career and community achievements.Capers also conducts NBA Read to Achieve programs at two Chicago Public schools. He has also volunteered to train referees for the Philippines basketball association.

I've seen several posts from Lakers fans who swear he hates the Lakers. At least he has that in his favor. The Celtics last saw Capers in game 2 of the ECF last season. The officiating was terrible in that game. The Heat shot 47 free throws to 29 for the Celtics. Pierce, Dooling and Pietrus all fouled out. There were bad calls and missed calls throughout the game. Lebron James took 24 free throws himself, only 4 less than the entire Celtics team. The Celtics are 6-4 over their last 10 games with Capers and 0-1 this season. The loss this season was the Nets game that resulted in a brawl. Capers gave Doc a T for yelling to Rondo. They let the Ntes get away with pushing and shoving and hard fouls the entire first half. The Nets shot 17 free throws to 5 for the Celtics in the first half and 3 of those free throws were on technicals. They did better in the second half after the brawl, but the refs' failure to call the game evenly in the first half led to the fight. The Pacers are 1-1 this season and 6-4 over their last 10 games. His home W/L record this season is 20-7.

Over the past 12 seasons, Courtney Kirkland has officiated 725 regular season games and 11 playoff games. He also officiated two seasons in the WNBA, including the 2000 WNBA Championship and the 1999 Conference Finals. Kirkland also officiated the 2010 and 2011 Venezuelan LPB basketball championships. Prior to joining the NBA, Kirkland also worked three seasons in the CBA where he officiated the 1999 and 2000 CBA Finals as well as the 2000 CBA All-Star Game. He was a high school official for four years as a member of the Baton Rouge (La.) Basketball Officials Association and was named Rookie Official of the Year in 1994. Kirkland earned a degree in Computer Science from Southern University. He was a member of the Northwestern High School basketball team that made it to the state semifinals in 1991 and 1992. Kirkland received the school’s Academic award, and led the team in assists, free throw and three-point shooting percentage.