The Celtics travel to Atlanta to take on the Hawks for the first of 4 meetings this season.

Share All sharing options for: Celtics look to make it 2 in a row as they take on the Hawks

The Celtics travel to Atlanta to take on the Hawks for the first of 4 meetings this season. The Celtics are coming off an impressive win over the Pacers at home while the Hawks are coming off an 85-84 loss to Detroit at home. Both teams are playing in the second of back to back games. The Hawks are a league best 7-1 in back to back games. The Celtics.... not so much.

Boston won the series 2-1 last season but all 3 games were close. The Celtics won by 3 points and by 2 points in overtime while the Hawks won their game by 5. Every game between these two teams seems to end up being chippy. There is no love lost between them, that is for sure.

Some of the faces have changed since last season. Joe Johnson is no longer there to catch on fire in the 4th quarter. Jason Collins was their starting center when the Celtics last played them in the regular season. The Celtics finally have their starting 5 back from last year and they looked good in the Pacers game but consistency has been a problem for them all year long.

The Celtics are back into 8th in the East (3rd in the Atlantic), one game ahead of the Sixers who lost last night. Atlanta is 3rd in the East (2nd in the Southeast), 2 games behind Miami at the top.

The Celtics showed that they are capable of playing tough defense from start to finish and playing a solid offensive game as well. The big question is whether or not they can find some consistency and do it again in the next game. They will need to if they want to beat this tough Atlanta team at home. 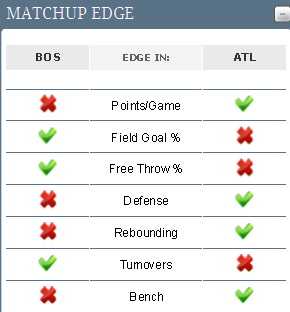 Smith is a very athletic and quick power forward and Brandon must box out and keep Smith off the boards along with slowing him down on offense. Smith is an average defender, though and so Bass should be able to get his shot off. Smith is averaging 16.9 points and 8.3 rebounds per game so Bass will need to be aggressive on defense to keep Smith from having a big game.

Teague is a good point guard and is averaging 13.2 points and 6.7 assists per game. Both are quick and both see the court well and so this should be a fun matchup to watch. Rondo played aggressively on both ends of the court against the Pacers. Hopefully he brings that same aggression to this game.

With KG's move back to center, he will be matched up with Al Horford. is playing very well, averaging 16.0 points and 9.6 rebounds per game. KG played a very aggressive and physical game against the Pacers and hopefully he will have enough in the tank to do the same vs Horford.

Defense - Defense is key to every win. The Celtics need to play tough team defense. We saw that the Celtics are capable of playing that type of defense in the Pacers game but can they do it 2 nights in a row? They have to guard the perimeter as the Hawks have good 3 point shooters who can kill a team from out there. They also have to defend the paint because players like Smith, Horford and Pachulia can get to the hoop and score there, especially on tip ins.

Rebound - The Celtics must make an effort to go after rebounds. They must box out and prevent tip ins and to prevent the Hawks from getting second chance baskets. The Hawks are a good rebounding team, but not great as they rank 23rd in the league in that category. The Celtics showed against the Pacers, who are a great rebounding team, that when they put out the effort, they can hold their own on the boards.

Be Aggressive - The Celtics must be the more aggressive team. They have to go after rebounds and loose balls. They must be aggressive in going to the basket and not settle for jumpers. They also have to be aggressive on defense and get stops. We saw all of this in the Pacers game. Hopefully they will bring it again in this game.

Bench Play - The Celtics got 39 points from their bench in their win over the Pacers. Lee and Barbosa shot the ball very well. Terry and Green still struggled with their shot and hopefully they can snap out of their slumps just as Lee seems to have done. Sully was just 2-7 but he got to the line for 6 free throws. He was once again aggressive on the boards, grabbing 10 rebounds and that is important. The Celtics need production from their bench because the starters can't do it alone.

Back to Back on the Road

Both teams are playing in back to back games. The Hawks are a younger team and were at home for both games while the Celtics needed to travel after their win. Can the Celtics bring the same intensity two games in a row?

Eli Roe has officiated 390 regular season games during his first seven NBA seasons. Prior to joining the NBA staff, Roe officiated in the CBA, NBA Development League and WNBA. He officiated in the NBA D-League Finals for two years, the D-League playoffs for four years and the WNBA Playoffs for two years. At the collegiate level, Roe refereed in the SEC, ASUN and OVC conferences and numerous Division II and III, NAIA and Juco league games. He also worked in four Division I postseason conference tournaments.