Celtics visit division leading Knicks with both teams in search of 3rd straight win. Whenever these two teams get together there is always a playoff atmosphere, even in the preseason. They split the series last season with each team winning on their home court. They also split a pair in the preseason this year.

The Knicks lead the Atlantic Division with the Celtics in 3rd, 7 games back. The Celtics are still in the 8th spot in the East and are 2 games up on the Sixers who have dropped to 9th and half a game behind Milwaukee for the 7th spot. The Knicks last won the division in 1993-94 but look to end the Celtics 5 year reign over the Atlantic this season.

The Celtics can once again get back to .500 with a win in this game. There are rumors all over about Danny working on a blockbuster trade and that's always unsettling for players. Hopefully it won't affect their play in this game as the Celtics need everyone to play well if they are going to come out on top in this one. 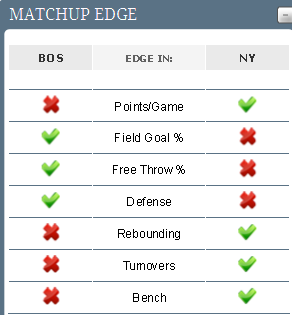 This is a tough match up for both players but probably harder for Pierce given Melo's level of play this season. Both have come up big for their teams in this matchup in the past. Melo has averaged 30.8 points in their 4 meetings last season while Pierce averaged 35.7 points in 3 games that he played in. Melo has been playing at an MVP level, coming off a 40 point game on Saturday and Pierce will have to up his game to stay with him.

This will be an interesting matchup between the new guard in Rondo vs the old guard in Jason Kidd. These two point guards didn't meet last year as each missed one game vs each other. Kidd leads the league with 32 regular season triple doubles in his 19 seasons. Rondo comes in third with 15 in his 7 seasons. Rondo is another Celtic that gets up for the Knicks. He averaged 17.7 points, 8.3 rebounds and 13.3 assists in the 4 games last season.

Defense - The Knicks have been playing good defense since Woodson took over as coach and the Celtics have shown in the past 2 games that they are still capable of locking teams down. The Celtics have to make defense their priority in this game especially because the Knicks can be a very dangerous offensive team. The Celtics must especially guard the perimeter as the Knicks are 3rd in the league in 3 point percentage at 38.8% and they aren't shy about shooting them. But they also have to guard the paint because the Knicks have several players who can take it strong to the hoop as well.

Rebound - The Celtics are still 30th in the league in rebounding with 38.6 per game. The Knicks aren't much better, coming in at 27th with 39.94 per game. That will change, though now that Amare is back and averaging over 10 rebounds per game. The Celtics have got to crash the boards as a team and win the battle on the glass if they want to win this game.

Play 48 Minutes - The Celtics must get off to a good start and play hard for 48 minutes in this game. They may have gotten away with playing 2 quarters against the Hawks, but the Knicks are too good to allow a similar comeback if the Celtics let themselves get down.

If the Celtics play as a team like they did in the Pacers game and in the second half of the Hawks game, they stand a good chance of winning this. If they play a disjointed game as they did in the first half of the Hawks game, it could get very ugly. In the Knicks games I've watched this season, they got a lot of help from the officials. With this officiating crew, there's reason for concern over the officiating in this game. Hopefully they call a fair game in this one. It's hard to win playing 5 on 8.

Tony Brothers is entering his 19th season as an NBA official and has officiated 1,093 regular season games and 61 playoff games during his career. Brothers made his first NBA Finals appearance during the 2011-12 season. He was a member of the crew that officiated the 1996 Mexico Challenge, 1998 Schick Rookie Game, 1999 McDonald’s Championship in Milan, Italy and the 2008 China Games. Prior to joining the NBA, Brothers spent four years officiating in the CBA, including three CBA Finals and a CBA All-Star Game. He has one year of collegiate officiating experience at the Junior College level. Brothers also has seven years of high school officiating experience in Virginia, including three state tournaments. As a way of honoring his late mother and to give back to his community, Brothers operates Sassy Properties, an organization dedicated to providing quality and affordable housing for disadvantaged families. He is also a board member of BillBro, an organization that provides scholarships for women and minorities. In 1994 he started a mentor program in the Tidewater, Va. schools.

There are several articles about what a terrible ref Brothers is and detailing his misdeeds. He has angered a lot of fans of just about every team because of bad calls, no calls, and one sided officiating. The Celtics are 1-1 this season with Brothers. He called a 115-85 win over the Nets in preseason and also the first regular season loss to the Nets. Brothers was responsible for calling Bogans' clothesline and choke job of Barbosa a regular foul. He also called a clean block a foul down the stretch which could have changed the outcome of the game. He most recently called the 1 point loss to Philly in OT. The Celtics are 4-6 in their last 10 games with Brothers on the court. The Knicks are 1-1 this season and 3-7 with Brothers in their last 10. His home W/L record this season is 16-10.

Violet Palmer, one of the first two female officials in the NBA, has officiated 798 regular season games and has appeared in nine playoff games over the past 15 seasons. Before joining the NBA, Palmer officiated in the WNBA during the league’s inaugural season, including the 1997 WNBA Championship. She has two years of CBA officiating experience and nine years of collegiate officiating experience, including women’s games in the Pac-10, Western Athletic, West Coast, Big Sky, and Big West Conferences, as well as five NCAA Final Fours and two NCAA Championship games. Before becoming an official, Palmer was a successful basketball player both at the collegiate and high school levels. She was a four-year letter winner at Cal. Poly Pomona, where her team won the NCAA Division II Finals in 1985 and 1986. In addition, she was on the basketball team at Compton High School. Off the court, Palmer is a CCA Manual Mechanics committee member. She also is involved with the City of Los Angeles Youth Referee Clinic in her hometown of Los Angeles. Palmer also acts as a coordinator for both the West Coast Conference and the Pac-10 Conference.

At one time Violet was the worst ref in the league. In one game Cedric Maxwell was moved to urge her to go back into the kitchen because her calls were so bad. She has had Tommy close to exploding many times as well. She's improved a lot over the years and is no longer the worst ref in the league (that honor goes to Bennett Salvatore) but she's still not a very good ref. Although, after getting a hug from Pierce after he ran into her in a win over the Pacers last season, the Celtics took 20 more free throws than the Pacers. The Celtics are 0-2 this season and 6-4 over their last 10 games with Violet on the court. The Knicks are 1-0 this season and 5-5 over their last 10 with Violet. Her home W/L record this season is 16-6.