Much has been made of Jeff Green's play this season. The common consensus seems to be that he has been "disappointing" relative to expectations. Diving deep into his performance metrics may help to better explain how Green's game has evolved through the first 30 games of this season.

Share All sharing options for: Jeff Green: Color by Numbers

The perception is that Green has been "passive" too often. His contract value and on-court demeanor have fueled the notion that he isn't performing his role as he should. I believe the more pertinent question is whether a player is capable of playing with more consistency given the role that Jeff Green has performed for this team.

Before we begin, a little explanation of the graphics below may be necessary. Borrowing from my good friend Kirk Goldsberry's "spacials" concept, I've broken down Green's performance into three sets of 10 games. Within each graphic are details of shot totals based on three spacial shot ranges: Close/Mid/Long range shooting. The shot totals and percentage of total shots in each spacial range are displayed below a new concept that I am introducing for the first time - that of consistency of performance, or "Player Consistency Rating" as I've coined it.

The PCR values displayed below indicate a progression toward a much higher frequency of quality performances from close range. Looking at the distribution of shots by play type one can see a trend toward offensive "touches" that favor Green's greatest strengths. 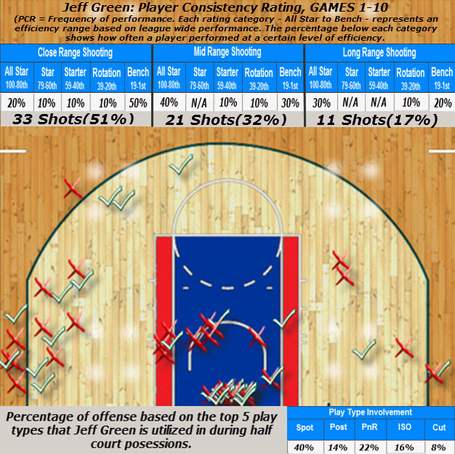 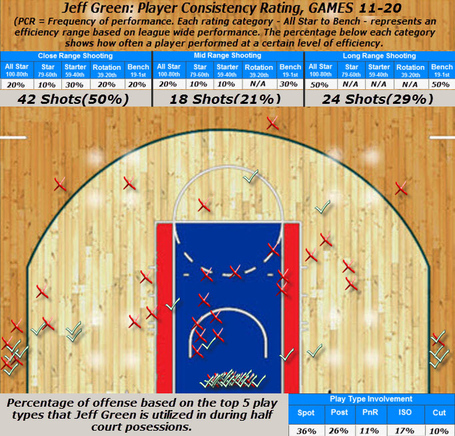 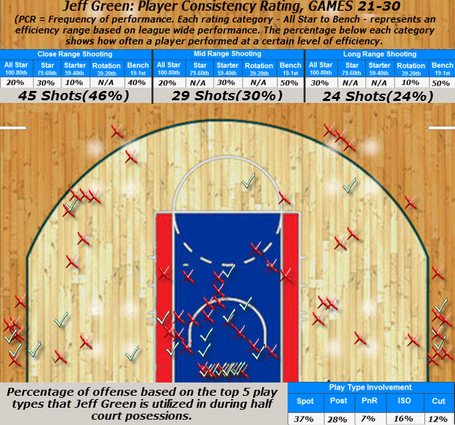 With Jeff, its not about the aggregate averages right now. The "bad" games are going to drag down his overall efficiency numbers and mask his accomplishments. Green takes about nine shots per game. Think of a baseball player's batting average and how it fluctuates during the first half of the season. Green had taken just under 250 total shots in his first 30 games.

By segmenting Green's shots into "spacial" ranges and "frequencies" one starts to understand how difficult it is to remain consistently above average taking the limited number of shots that he takes in each range. The difference between going 2/3 or 1/3 in any of the three spacial ranges drastically alters Green's efficiency. One missed shot in any area can alter a spacial performance from "All Star" to "Bench" level when one is only taking and average of two or three shots per range. If one were just to look at his efficiency on spot-up, no-dribble, corner 3's, left-side ISO's from 17 feet, and baseline post-ups from either side, they would see the foundations of a burgeoning offensive game.

BREAKING DOWN THE FILM

Watching film on every Jeff Green possession has revealed some things that get lost when watching a full game in real time. Isolating possessions for a single player allows for a more thorough breakdown of how a shot opportunity was created, what the options were on the play, and how the execution of the shot was relative to the options.

What I see with Jeff is not that his top game is being seen with more frequency, but that his bottom game is being seen with less frequency. His usage has gone up substantially and though it hasn't always led to efficient performances - see the 5-17 game - he is consistently getting shots in "his spots". I would take the 9 shots he got in the paint during that 5-17 game against the Kings all day, as I would the right-side corner 3's; he was shooting over 42% from that spot after 30 games. These are both historically efficient areas for him to generate offense.

His post game has traditionally been highly efficient for most of his career, especially when matched up against SF's. Now that his volume of post touches is increasing, I see him working to improve his attack moves. He is currently favoring his left shoulder far too much - again, something I broke down at season's beginning. But, he is changing speeds much better, recognizing distance when setting up, and using footwork to create space on his counters.

This is consistent with his results on "close" finishes as he is getting all the way to the rim with greater frequency and also starting to convert his shots in the paint with more regularity. To me, this is indicative of a player who is learning how to attack his match-ups better. Green has historically faced PF's throughout his career. Using his first step, Green can typically blow by a larger, slower footed opponent. Now that he is playing a majority of time against smaller, faster wings; Green has begun to vary his approach.

Its much easier to maintain a healthy efficiency when there are a higher volume of attempts per game. It mitigates the impact of the shots that inevitably take place outside of the "sweet spots" and help to buffer against the "off nights" that everyone has. The things that stand out the most from the game tape are:

1. The fact that there is a high percentage look available out of most of these shots

2. His shot distribution is shifting toward his most efficient play types and shot locations

3. He's increasing his aggression when he's in those spots

What I'd like to see as the next phase of his development is to start using a drop step to spin off of the right-shoulder when coming from the left block. His defenders are hopelessly out of position on most of these post attempts because they are so sure he is going to go left-shoulder toward the middle. Reviewing the Sacramento game again, there were at least five instances where a spin toward the baseline would have resulted in an uncontested layup or dunk vs. a challenged half-hook.

An area that has been a real issue for Jeff is shooting off the dribble,which is why his Post-to-ISO splits really reflect how important it is for Jeff to set up close to the basket. Its ironic that Green had a beautiful step-back jumper against Carmelo Anthony recently, as both have aesthetically fundamental shooting mechanics, yet struggle with mid-range efficiency off the bounce.

Reviewing the film, it seems that Green's primary issue with finishing in the mid-range and in the paint comes down to balance. When his weight distribution is even off both feet he is effective, but when he gets caught leaning or fading off of one foot his results are erratic. At his height and reach, Green would benefit from a heavy emphasis on practicing his one/two dribble shooting - something that Paul Pierce could be particularly helpful with.

In his current role, Jeff's best bet to have a consistent, efficient impact is to attempt to streamline a majority of his shots into the areas he is historically most efficient at, which is what he has been trending toward. Within those attempts, Jeff has to continue to be a student of the game, break down film, and work on the technical elements involved - countering off his dominant right-hand/left-shoulder tendency being chief among them.

Considering all the other factors at play with both Jeff and the team as a whole, i'm satisfied with his progress to date. It was going to be a "project" of sorts to build Jeff Green's game. The team's inconsistencies with lineups and roles certainly hasn't helped expedite the process. But, I've seen enough progress to at least remain optimistic that his performance is trending up.

That's a much different statement then saying I'm satisfied with where his performance level is at overall. A 9M/year player comes with expectations, i'm just not falling for the trap of instantly judging a player based on his salary and ignoring the specifics of what's necessary for him to earn that salary.

Jeff Green is at the beginning stages of re-inventing himself into the player many have projected him to be. It was never going to happen overnight. Unfortunately, Green's salary and his tantalizing, yet untapped potential, make him an easy target for ridicule. He's a work-in-progress, as is the rest of this team. That work might not lead to the results that everyone was expecting/hoping for at season's beginning. But, I do see signs that some of the right things are being done to get there, in the case of Jeff Green.

INTO THE MIND FOR A MOMENT

A final note. Working in the field of player behavior and its impact on performance has led to a few key observations regarding Green. Much like Rondo, Green is a highly logical/analytic player whose aggression lies in predictability of the actions of those around him.

Its my opinion that Green's aggression fluctuates when he is unsure of the "rhythm" of everyone around him. This is consistent with my observations while watching game film. The role changes surrounding Collins/Bass/Sullinger as well as Lee/Terry/Bradley had immediate implications on how Green asserted himself following those changes.

Based on a large sample of quantitative and observational behavioral data collected over the past 10 years it appears that the real key to "unlocking" Green's potential lies in creating a shift in his thought process from, "how should I get involved in this situation?" to "how should I attack this situation?". A large part of creating that shift is going to be based on clearly defining a role that empowers Green to react to situations with that mindset.

As the rotation stabilizes Green should find more consistency in his production. It will be critical for the team to empower him with a role commensurate with his salary and expectations. He is not the type of player to force his "will" on others in the absence of a certainty that it is his job to do so. He will not simply produce because people respect his talent and think he can impact the game. His career experience has further conditioned him to defer.

Based on his usage patterns it appears that the team is figuring that out. The more situation-specific responsibility he's given, the faster his game should develop. There are limits, of course. Not the least of which is the reality that the teams logjam of Power Forwards and Guards makes it extremely difficult to find him the necessary minutes for the type of usage that will maximize his growth.

The organization made a financial commitment that would indicate the intent for a greater role down the line. It may take a couple of years for Green to enjoy the opportunity necessary to fulfill that role. However, there is plenty to watch with Green within the context of the current team.