The Celtics are looking for their first 4 game win streak of the season as they host the Phoenix Suns.

The Celtics are looking for their first 4 game win streak of the season as they host the Phoenix Suns. This begins a 5 game home stand that will also include Houston, Charlotte, New Orleans, and Chicago. The Suns may put some extra effort into this game as they are sitting on 1999 wins and are looking for their 2000th franchise win. A loss in this game will put the Celtics in the record books and not in a good way.

The Celtics are 10-6 at home while the Suns have struggled on the road with a 2-15 record. But Phoenix have won 4 out of the last 5 against the Celtics, including their only game last season, a 79-71 win at the Garden. The Suns are 5-4 against the Celtics in the KG era.

Both the Suns and the Celtics started the season with 9 new players that weren't with the team last season. Both have struggled somewhat with incorporating the new players. While the Celtics seem to be turning it around, the Suns are still struggling to find some team chemistry. The Suns played in Milwaukee last night and so fatigue may come into play for them as well.

The Celtics are looking for their first 4 game win streak along with trying to get back over .500 again with a win in this game. With some favorable matchups coming up during this 5 game home stand, this might be time for the Celtics to make a nice run. If they play like they did in their past 3 games, it shouldn't be a problem. 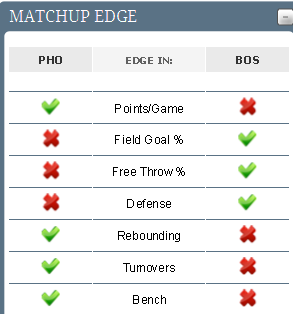 Rondo is coming off yet another suspension, although this one wasn't exactly deserved. He should be fired up to get this win since his teammates bailed him out and pulled off the win over the Knicks. Dragic is averaging 14.4 points and 6.4 assists so it won't be a walk in the park for Rondo but he should be able to win the matchup if he is aggressive.

With all the rumors going around about Gortat wanting to come to Boston, he may try to audition for the Celtics by having a big game in this one. Gortat is averaging 8.5 points and 8.6 rebounds this season and it will be up to KG to keep him out of the paint.

Scola is averaging 12/9 points and 6.2 rebounds but has in the past found ways to come up big against the Celtics. He can hit the jumper and he can get to the hoop and so Brandon's defense will be crucial to keep Scola from having a big game in this one.

Defense - This is the key to every win this season and to a championship as well. We have seen the Celtics defense that we have come to know and love in the past 3 games and because of that defense they are on a 3 game win streak. Playing defense like that takes energy and teamwork and hopefully the Celtics will continue to play with that type of defensive energy and teamwork.

Ball Movement - The Celtics need to move the ball and find the open man in order to stretch the Suns weak defenses. They also need to try to get the ball into the paint and not just settle for jumpers. If they get the ball into the post they will be able to score, draw the foul or kick out for an open jumper. Against the Knicks, even without Rondo, the Celtics had 26 assists, which was their second highest assist total for the season. When the ball moves, the Celtics are much harder to guard.

Crash the Boards - The Celtics must make an effort to grab rebounds, especially on the offensive end. By grabbing offensive rebounds it will prevent the Suns from getting out on the break. Rebounding is mostly desire and effort and the team that wants it most will win the rebounding battle. The Celtics have been rebounding well in their 3 recent wins and every player is doing their part to crash the boards.

Bench Play - The Celtics got a big boost off the bench in the Knicks game. Jeff Green Jared Sullinger, Courtney Lee, and Leandro Barbosa all pitched in to help the Celtics get past the Knicks. The Celtics need to get that kind of production from their reserves on a consistent basis.

The Celtics are are 2-1 this season and 7-3 over their last 10 games with Phillips as a ref. One loss last season was game 2 vs the Sixers that he officiated along with Dan Crawford in which KG was called for an offensive foul with 10 seconds left and a chance to win the game. The officiating was fairly even in all three games so far this season. It was Phillips and fellow ref for this game, Josh Tiven, that got Tommy to swear on the air last season in a game against Houston about the refs falling for all the blank blank flops. The Suns are 0-1 this season and are 8-2 in their last 10 games with Phillips. His home W/L record this season is 15-11.

The Celtics are 2-1 this season and 5-5 over their last 10 games with Tiven. The loss this season was New York in OT in the preseason in which the Knicks shot 38 free throws to 33 for the Celtics. One win was the Orlando game, also an OT game and worked with Phillips. The other win was against the Sixers. The Suns are 0-1 this season and have only had 5 previous games officiated by Tiven in which they are 2-3. Tiven lives in Connecticut and he has a twin brother who is a big Celtics fan and who was shown in the crowd at the Garden in a game he officiated there. His home W/L record this season is 13-7.