The curious case of Jeff Green

It's been two pre-season games--PRE-SEASON GAMES--and fans are already jumping off the Jeff Green bandwagon. He raised expectations after being the best Celtic in last year's playoffs and with Paul Pierce and Kevin Garnett gone and Rajon Rondo on the shelf, he was supposed to be the man. He's vowed to bring back the "a**hole mentality," but we've yet to see it.

Share All sharing options for: The curious case of Jeff Green

OK, I'll play the part of irrational fan/blogger who has his finger on the panic button: Jeff Green is being sorely outplayed by Gerald Wallace right now.  If this continues, Wallace's remaining three years of his $30 million contract makes Green's deal look like a trade chip.  At Media Day, he promised us that he'd channel Garnett and be an a**hole again.  In two preseason games, he's been more Tony Stark and less Ironman.  Argghhhh, I'm so frustrated!

But let's not get ahead of ourselves.

Last night, he technically was the most aggressive player on the floor; he lead the team in field goal attempts in 21 minutes of play, but 6 of his 10 shots were threes and 2 more were in transition.  He was a -14 (worst on the team) and didn't get to the free throw line.  Numbers don't lie, but they certainly don't tell the entire story.  Let's take a look at all of Green's touches last night: 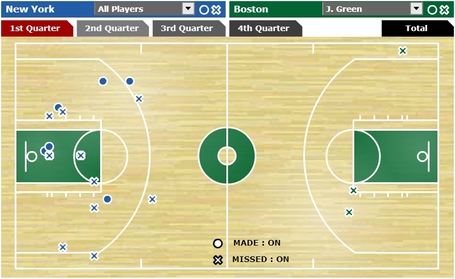 It's no surprise where Jeff Green's 2 monster 3s came from last night; he loves that left corner: pic.twitter.com/iJzXt7EdI9 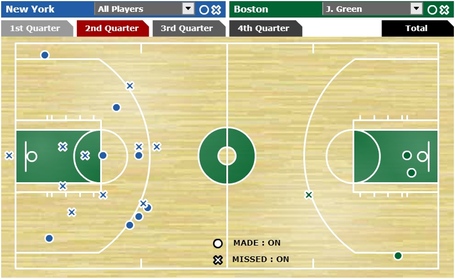 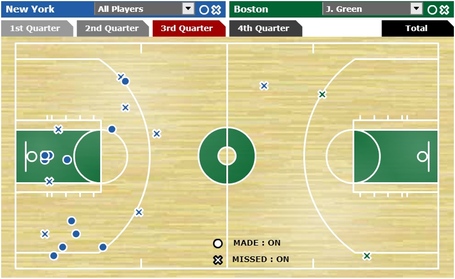 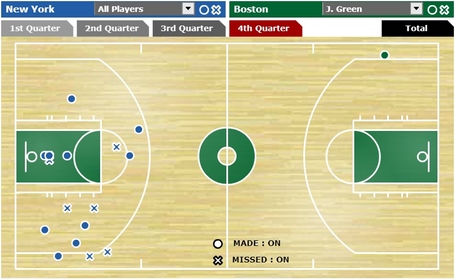 Sure, Jeff Green could have been more aggressive last night.  There were a handful of times when he could have driven in favor of a jumper, but I think it's a matter of it being preseason basketball and him taking it in stride.  Stevens has assured us that Green has been great in practice and Stevens is focusing Green's role to 2-3 positions rather than 3-4.  Last night, Green played a bulk of his time at shooting guard and it's possible that it was just an experiment.  Nonetheless, these are preseason games, in effect, pick-up games or practice scrimmages with referees.

However, people will still question Green's mentality and mindset.  Is he ready to make the jump?  It's too early to tell, but let's cut him some slack.  He knows that when the regular season starts, he'll have to shoulder most of the scoring load and public scrutiny if the team is losing.  Why burn yourself out now during the preseason when your team is trying to figure things out?  The shots he's taking aren't necessarily bad, they're just a) not going in and b) not Faverani dunks.

Big picture: Green's game is more complementary and that's OK.  I've said over and over again that he's more a #2 than a #1.  Two months from now when Rondo comes back, it'll be clearer.  Instead of Green trying to create for his teammates, it'll be Rondo finding Green as a finisher.  And maybe right now, Green's holding back.  Maybe he is saving his best stuff for when it matters.  Maybe we all need a little perspective.  He's still one of the most versatile players on the team and there hasn't been a reason to flip the switch.  As a veteran, he understands that it's a long season, especially considering the team is in rebuild mode, and he has to pace himself.

Until then, we're all on Jeff Green watch: