The point is there is no point: what the Celtics offense could look like next season

There's a lot of buzz that while Rajon Rondo is out, Avery Bradley will start at point guard, but in a system that relies on spacing and ball movement, that won't matter. On a roster full of speed, athleticism, and versatility, everybody's a point guard and nobody's a point guard.

Share All sharing options for: The point is there is no point: what the Celtics offense could look like next season

When comparing the Celtics of the Big Three/Four era against what Brad Stevens will be facing, it's night and day.  Doc Rivers had a veteran team, but more importantly, a collection of superstars at the back end of their primes.  Garnett was 33, Pierce was 32, and and Ray was 34.  Obviously, these guys had plenty left in the tank.  They won a championship that first season, but for the five years that followed, Rivers was often forced to run on empty when the team got deep into the playoffs.

There's no doubt that Doc was a great tactician.  How many times did we watch him draw something up in the huddle and then see those X's and O's play out on the floor for a beautiful bucket?  He was a master at it.  Consider that he had to devise an offense that would preserve his vets' legs enough to keep them fresh on defense on a play-by-play basis with the foresight to have them ready in the post season year after year.  That meant less movement and less ball handling for guys that were used to having the ball in their hands all the time.  Under a different coach with a different system, I don't know if that championship window stays open as long as it did.

Now, Brad Stevens has been dealt a completely different set of cards.  His Celtics team is young.  Outside of Rajon Rondo, there isn't a superstar whose ego needs to be handled.  The roster is smaller than most with logjams at guard and on the wings.  There isn't a true center who can play a traditional 5.  The bigs are skilled, but there's really nobody that you can throw the ball into in the low post and watch him work.

But something tells me that this team fits Brad Stevens' style more than people think.

Really, the Celtics as currently constructed are not unlike the teams he had at Butler.  I banged this drum last week when we talked about the defense, but Stevens will have every chance to duplicate his Bulldogs system that he succeeded with with the current make up of the team.  Sure, we're in rebuilding mode, but it's not like this is an island of misfit toys.  Most teams in rebuild more are more concerned with the makeup of a player's contract rather than his game.  Even after the Brooklyn trade, the players coming back are all serviceable pieces to what Stevens might want to do.

With the Bulldogs, Stevens ran out a lot of lineups with three wings and two bigs.  He spaced the floor with shooters and made ball movment a premium.  At his press conference at Media Day, he stressed the importance of pace and versatility with players like Jeff Green and Gerald Wallace.  He doesn't want to see the ball stick in a player's hands or shots to be taken at the end of shot clocks.  That was Butler basketball and it may soon be Boston basketball, too.

Let's check out a set from Butler's playbook from the last couple of years and how it might work with the Celtics personnel.  I found some great examples here, here, and particularly here.  You'll see that everybody is going to get a chance to touch the ball and be in a decision-making position.  In effect, everybody is a point guard.  (For what it's worth, can anybody see Fab Melo working out on this team?)  Here's Butler's spread pick and roll: 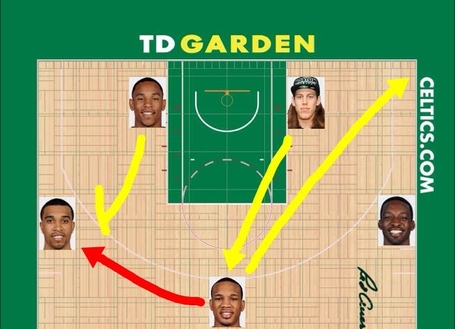 >So, yes.  Avery Bradley starts at point, but the offense is generated on movement.  He's been getting rave reviews (mostly because of his defense) at PG and Stevens has said that it's his job to lose, but it won't be because he's making bad decisions on the offensive end.  Here's Avery today talking about his role at the point:

"I played all point guard today," he said. "It was new, but (Stevens) makes you feel comfortable."

Bradley indicated that while he may technically be the starting point guard on opening night, bringing the ball up the court will be a shared responsibility - especially in transition.

Also, take into consideration where Green starts off in this set.  We've heard that he's played all three wing positions in the first days of practice, so expect to see him slashing from the wings and shooting from the perimeter.  He shot 38.5% from three in the regular season and 45.5% in the playoffs.  He's murder off the dribble, so I'm betting Stevens wants him to get the ball in space with all his options from the triple threat.

Green became quite the strategic piece under Doc Rivers. He was too quick for most power forwards and too strong for most small forwards. Stevens also likes him as a so-called 2-guard.  The job is admittedly about to get more difficult for Green as well as Wallace.

"Right now I'm floating between 2, 3 and 4," said Green. "It's difficult but I like it. It's a great challenge to be able to play multiple positions. I think everybody on this team can do it."

The first action has Bradley passing to Lee free throw line extended and then cutting to the opposite corner three.  Both bigs come up: Olynyk hits the lift spot and Sullinger sets a pick. 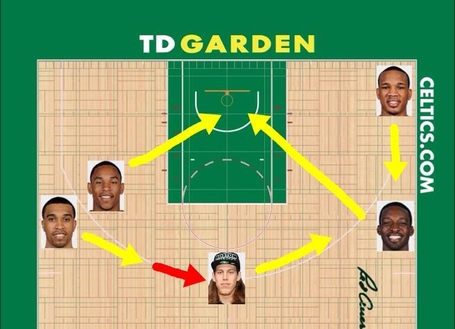 Olynyk has been compared to Dirk Nowitzki more than a few times this summer, so getting him the ball away from the basket makes sense.  He's got a decent post game, but because of his versatility as a shooting big, he'll do his most damage up top.  It brings his defender (presumably the opposing team's center and rim protector) away from the basket and leaves the lanes open for cutters and divers.  Remember that Olynyk played point guard up until the 11th grade when he had a massive growth spurt of seven inches.  He's a PG trapped in Thor's hair.

Courtney passes the ball to Kelly and Olynyk's first look is to the rolling Sullinger.  This is where Sully has to use his size and ability to root our space becomes a premium.  With Olynyk's defender up and face guarding a jumper and Sully's defender occupied with the PnR, Jared will have the opportunity to establish position under the rim.

If that dump down isn't available, Olynyk dribbles towards Green who back cuts to the basket.  I think you'll see that a lot with Green and especially Gerald Wallace.  They don't call Wallace "Crash" for nothing.  Let's remember that before he went to Brooklyn, he was an All Star in Charlotte and averaged 7.2 free throw attempts a game.  If we can get him and Green crashing the paint, we'll gladly take those easy points at the line. 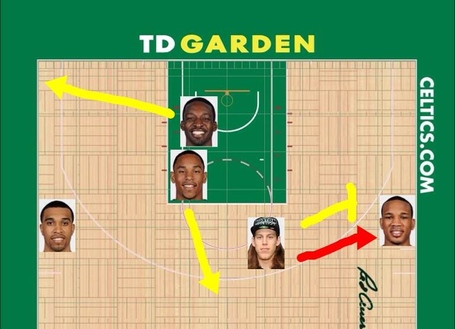 If the Green back door isn't there, he'll float to the corner three.  Sullinger comes up to replace Olynyk in the lift spot.  Olynyk dribble hands off to Bradley and sets a pick.  Olynyk will have the option to roll or pop out for a jumper, depending on how the defense plays the pick.

It's another action that features Bradley in the point guard role, but as Stevens stresses, it's going to be a quick action, quick decision offense.  I don't think you'll see Bradley keeping his dribble alive and trying to hold his defender(s) away from the basket like Rondo does in attempt to freeze them with a fake later.  With youth and athleticism on their side, the Celtics will be a Hoosiers fan's wet dream with the ball zipping side-to-side and everybody having a chance to touch the ball. 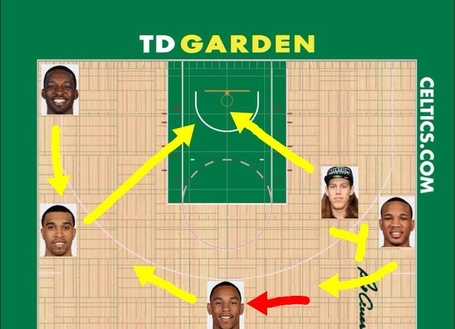 If all else fails, Avery Bradley gives it up to the lifted big at the top of the key.  It's Sullinger in this example, but it could easily be Jeff Green or Gerald Wallace if Stevens decides to go ultra-small.  They'll be down in the shot clock here and might need a pure penetrator to break down his man one-on-one.  The big will have the option to hit the cutting Courtney Lee who can go to the rim or receive a baseline screen from Olynyk and fade to the corner three or give it to Green on the wing.  It's possible by then that there have been a few switches in the defense and Green could be getting the ball in a mismatch.

The players have all called Stevens a "basketball junkie" and his mind has probably been racing with all the possibilities that this roster affords him.  Early reports have been that Jordan Crawford has impressed, Phil Pressey has been one of the best guards so far, and international man of mystery Vitor Faverani has been solid.  In his conversations with Stevens, Kris Humphries has hinted that the team will run more and he's shown that with his pre-season conditioning.  Oh, yeah: and Keith Bogans thinks MarShon Brooks is a young Kobe, so there's that.  Man, this team is teeming with infinite possibilities.  Who doesn't love a rebuild?

With all that said, what does this all mean when Rajon Rondo makes his triumphant return in December?  It's hard to forget what happened last year.  After Rondo went down, the team rattled off a 14-4 record.  Why?  The team missed Rondo for sure; he was consistently the toughest matchup for opposing teams and the most effective player in getting his teammates open looks.  However, you could get a sense that they felt freed in a way.  With all hands on deck to save a sinking ship, people got more touches instead of relying on their all star point guard.  Nobody would say that they were better without him, but it did force the supporting cast to step up.

If the team's playing well when Rondo comes back, you'll hear the same blowhards (Gary Tanguay, Marc Stein, etc.) calling for a trade.  Why keep one of the best point guards in the league on a team and in a system that doesn't really need a true point guard?  Well, 1) he's our Paul Pierce now and a big attraction for any incoming free agent and more importantly, 2) he's still the best player on our team who instantly changes the complexion of the game when he's on the floor.  The new system won't rely so heavily on his decision making, but when the shot clock's down in the 4th quarter and you need to run something simple, there isn't a player out there I'd rather have with the rock than Rondo.  He's the best freelancer in a system that's specifically geared to freelancers.  The idea of trading him is ludicrous.  He's also naturally picked up the leadership mantle and the supposed coach killer is best friends with our new coach.  I can't wait for Monday's preseason game or the first regular season tip, but ultimately, it's that day in December when Rondo comes back that really has me excited.

Last one on the court is Rajon Rondo pic.twitter.com/xKiI64H3yE

Rondo is the only player left in the gym after morning practice. He just finished. pic.twitter.com/jNB332tyLa