Jeff Green: "I just told myself: put your head down and drive. Be aggressive."

Jeff Green was underwhelming during the preseason, but vowed to bring the killer mentality back when the regular season started and he did. He picked up where he left off last year with last night's aggressive performance in Toronto.

Share All sharing options for: Jeff Green: "I just told myself: put your head down and drive. Be aggressive."

Before the tip, Green talked about how he wanted to be a 20 point scorer this season and humblebragged that he was a "great player." Last night, he showed that [explitive] mentality that last season, Kevin Garnett urged out of him. Chris Forsberg of ESPNBoston did a great job analyzing the numbers against Toronto:

The advanced stats are more encouraging than the standard line. Green accounted for a team-high 21 plays finished, generating 1.19 points per possession, according to Synergy Sports data. He generated points off 57.1 percent of his finished possessions, drew shooting fouls on 23.8 percent of his touches, and limited his turnovers (1) on a night the Celtics as a whole were sloppy with the ball. Green was plus-8 overall in plus/minus.

"I was kind of zoned out," said Green. "Going into the game, I just told myself, put your head down and drive. Be aggressive. And, if I play hard, the offense will come, but I wanted to focus on defense. I was guarding DeMar, he's a great player. I just wanted to try to be aggressive and put them on their heels."

As Forsberg also points out, the eye-opening statistic is that Green went to the line nine times. In the first six preseason games, he shot a combined 7 free throws, but in the final two against Minnesota and Brooklyn, he shot 7 and 8, respectively. It's clear that he's ramping up his aggression and starting to take it to the rack. Check out his shot chart from last night: 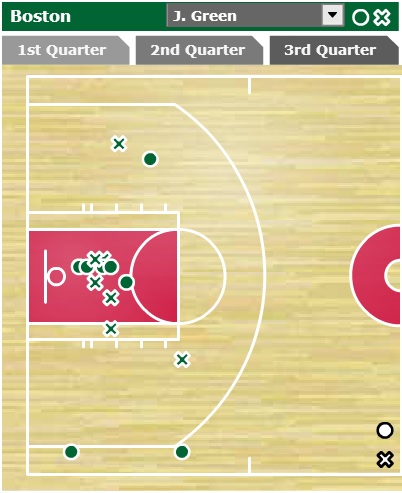 That illustration is more indicative of a power forward or center rather than a previously tentative swing man. It's the smallest of sample sizes, but if Green shows up like that every night, it won't matter what the numbers are. It's never been a question of talent with JG; it's been an issue with his attitude towards the game.

The Boston Celtics opening night (vs. the Toronto Raptors)