What can we learn from tonight's preseason game?

Share All sharing options for: What can we learn from tonight's preseason game?

May 3rd was the last time the Boston Celtics took an NBA court.  A lot has happened since the Knicks knocked the Celtics out of the playoffs.  New coach, new roster, new era.

Seems like we're a long, long way away from Banner 18, but as my friend Master PO likes to say, "the journey of a thousand miles begins with one step."  The Celtics play basketball again tonight, on a real court with uniforms and referees and an NBA opponent.

The games won't count in the standings, but that doesn't matter.  What does count is that we get to see something tangible.  And tangible is good considering that we've been talking theory for the last 5 months.

So what can we realistically glean from tonight's exhibition that we don't know this morning?  Well, to begin with, probably not all that much.  One game cannot tell you who will be "good" or "bad" this year.  It won't tell you if we can play offense or defense or if Brad Stevens is cut out to be an NBA coach.  All of these things will take time to sort themselves out.  And as Stevens made sure to point out, we won't even know what the starting lineups and rotations are going to be after tonight or even by the end of the preseason.

Still, that doesn't mean we can't look for some interesting take-aways from tonight.  Here are a few to keep an eye on.

1. Who's in shape?  Jared Sullinger admits openly that he's out of shape.  For any NBA player to admit that (even returning from injury) things must be pretty bad.  If he makes it over half court without a paper bag covering his mouth or oxygen tubes strapped to his nostrils, I'll consider it a success.  Ok, that's exaggeration for effect but you get my drift.  On the flipside, we've heard Kris Humphries is in excellent physical condition (insert your own "running from the paparazzi" joke here if you like - this will go on all year so I apologize in advance).  Who else is ready for prime time and who isn't? 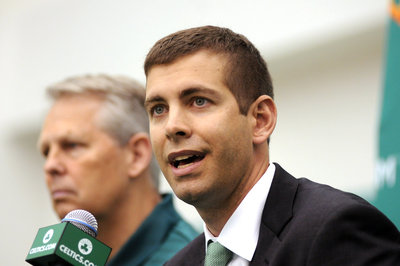 2. How comfortable does Avery Bradley look at the point? In the past he hasn't looked too smooth out there running the show, but that was with a different coach, different teammates, and a different set of pressures.  He won't be expected to be Rajon Rondo but he'll have to hold the fort down until Mr. Connect Four can return to the court.

3. How do the new/young guys look?  Speaking of running the point, the only true point on the roster that will play tonight is Phil Pressey.  The book on him is that he's an exceptional passer but occasionally out of control and shaky on the jump shot.  I'm tired of reading books, I want to see him play for myself.

Same thing with Vitor Faverani.  I want to see how El Hombre Indestructible looks on the court.  Does he play better at the high post or down in the trenches?  Does he rebound?  As long as he doesn't concuss himself on a doorframe I'll consider him to be an upgrade from last year's Brazilian model.

Kelly Olynyk raised the bar for himself in summer league but that competition wasn't what he'll be up against tonight.  I've got high hopes for Sunshine but I'm also going to be reminding myself often that he's still just a rookie and it will take time for him to adjust and adapt to the flow.  Still, I might pay a little closer attention to how he moves his feet on defense just to see how hard he's working on shedding his defensively-challenged label.

He's not a rookie, but how about MarShon Brooks?  I've heard/read next to nothing about him since Media Day so I'm not exactly clear on where he stands in the pecking order.  Is he behind Crawford?  Is he completely useless on defense?  Will he start doing heat checks 2 minutes into the game?  Or is his reputation as a gunner a little overblown?  Can't wait to find out for myself.

4. How much will Brad Stevens experiment?  There are zero expectations and it sounds like even Stevens doesn't know what to do with his lineups.  Sounds like a great opportunity to throw out traditional roles and experiment with things just to see if they work.  We've got shooting guards galore and Jeff Green can play some 4, so how would a small-ball lineup look?  Or flip that script and put Jeff Green at the 2 and see what a big lineup (with Wallace, Olynyk, and Bass or Humphries) looks like on the court.  Can Jordan Crawford play backup point guard?

5. What pace will they play at?  One of Stevens' stated goals is to play defense and up tempo.  You can't expect the defense to be clicking from day one, but it would be nice to see them push the ball at every opportunity.  This is a young lineup with fresh legs that just spent the last week conditioning for this.  Aside from Sullinger, there's really not excuse not to get up and down the court.  That style also would appear to benefit guys like Bradley, Green, Wallace, and several others.  So in Tommy's immortal words, RUN baby RUN!

There's more I'm sure but that's a good enough start for me.  What else will you be looking at tonight?