With Rondo still rehabbing his knee, the Celtics have turned to an unlikely trio to generate offense.

Share All sharing options for: Connect three: why Sullinger-Olynyk-Wallace works

Brad Stevens' offense is a quick trigger system.  The ball is supposed to be in constant motion (and for what it's worth, Jeff Green's comments about the a**hole mentality coming back worry me a little); if you're not taking an open jumper or making a move, swing it to the other side of the floor.  You force the defense to make multiple decisions on their coverage until you can take advantage of a crack when it's open.

While Jared Sullinger, Kelly Olynyk, and Gerald Wallace seem as unlikely a trio as Avery Bradley and Jordan Crawford a back court duo, it works for so many reasons.  In their own words:

Sullinger: "Very unselfish players. I mean, honestly, everybody's very unselfish, but they just always move, especially Kelly and Gerald. I don't know about myself. I don't think I'll be moving like them. They're constantly moving, constantly open, so it's easy to find them."

Olynyk: "Guys are making hard cuts, setting good screens. You want to reward them for that kind of stuff. Any time you get other people involved and make people around you better, that's a great thing to do in the game of basketball."

Wallace: "They're able to spread the floor. I'm a slasher. I'm a guy who likes to get to the rim and cut. Those guys are able to spread the floor, pop back, shoot 3′s, knock down the 15-footers and it opens up the middle of the floor for me to cut and drive. And then on top of that, when I'm cutting, those guys with the ball I think they're great passers. They're able to make the passes that I need when I'm cutting. I think that's what benefits all of our games."

One more quote from Stevens on Wallace: "The one thing I've learned about Gerald Wallace in my short time knowing him is he's going to give it everything he has, regardless of whether it's in practice, an exhibition game or a regular-season game.  That guy plays hard, and it'll be good. I think that sets a really good tone for our team."  At 31, Gerald Wallace may not have the talent and upside that Jeff Green does today, but he knows who he is and what he does best.  It was just a preseason game, but Crash was at his best last night and it's no surprise that he flourished while paired with Sullinger and Olynyk.

Olynyk is a point guard at heart and you could see those PG instincts at work Monday night against the Raptors.  He got a lot of touches above the free throw line in decision-making positions.  That forced his man (often times, fellow seven footer Jonas Valanciunas) outside of the paint, freeing up the lane for cutters (Wallace) and bangers (Sullinger).  Sullinger, like a fish in water, wreaked havoc in the key.  It's not hyperbole when Heinsohn gushes about Sully's ability to root out space and be in perfect position for a pass or a rebound.

With all three working together, it becomes that final scene in The Avengers with Hulk smashing on the ground, Ironman zipping through the air, and Thor swinging that hammer.  The set starts with all three players in positions of strength: Olynyk at the top of the key, Wallace on the wing, and Sullinger on the low block: 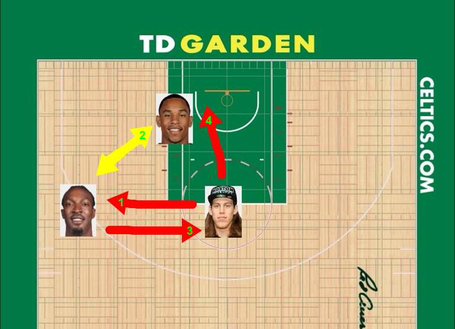 Early in the game, Olynyk caught the ball in rotation. 1) Instead of facing up and going into a triple threat, he swung it quickly to Wallace. 2) Sullinger fakes a ball screen.  The defense overcompensates expecting a Crash drive. 3) As soon as Sullinger's defender (Hansbrough, I think) overplayed the strong side, Sullinger sealed him off, Wallace touch-passed it back to Olynyk, and 4) Olynyk found Sullinger below the basket for a layup. The ball didn't touch the ground once. 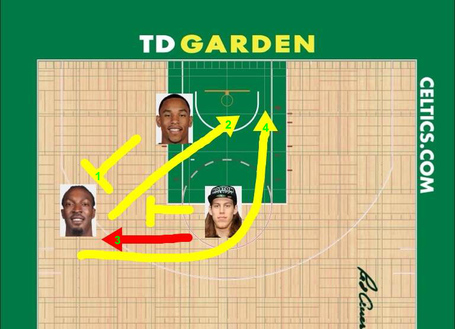 Later, same starting position, different action. Olynyk tries to pass to Wallace free throw line extended but Rudy Gay denies the ball. 1) Gay's aggressiveness sets Sullinger up for back pick and 2) Wallace cuts through the paint to the opposite corner three.  Wallace draws the attention of two defenders so 3) Olynyk dribble hands off to Sullinger and sets a pick.  4) Sullinger and Olynyk play pick-and-roll with one defender and another defender out of position. 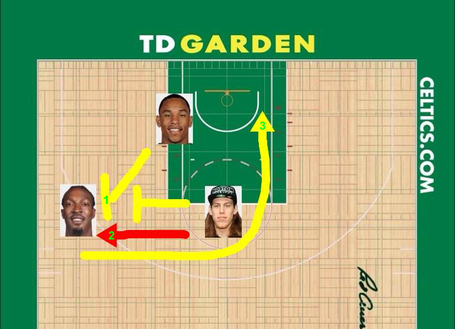 With Toronto's defense not sagging as much and face guarding man-to-man, Olynyk and Sullinger set a double screen for Wallace.  1) Sullinger picks the initial defender and Olynyk passes to Wallace on the move and 2) sets another screen for the trail defender.  3) Wallace hard lines to the rim with a rolling Sullinger on his left and Olynyk popping to the free throw line for a jumper.

It's basketball poetry in motion.  Sullinger's still trying to catch his breath after spending eight months rehabbing his back, Olynyk is still adjusting to the speed of the NBA game, and Wallace is getting used to his new surroundings, but it's a promising start.