The Celtics will host the Bucks tonight in their home opener. with both teams looking for their first win of the season.


The Celtics will host the Bucks tonight in their home opener. with both teams looking for their first win of the season. Both the Celtics and the Bucks will be looking to play with some consistency and and iron out the wrinkles that come from trading marquee players and adding new players to the team.

With Brandon Jennings traded to Detroit and Monta Ellis in Dallas and with Luke Ridnour, Brandon Knight and O.J. Mayo added to the mix, they are dealing with some of the same issues that the Celtics need to also overcome. At least the Bucks starting line up appears to be solidified.

The Celtics starting lineup is still up in the air. I have a feeling that it's going to be awhile before we actually know who will be starting each game. The starting lineup below is once again from the Game Notes. I think they just go with the starters from the previous game. I'm going to take a guess and say that in this game Stevens will start

Crawford was playing the point on the green team in practice. And after Wednesday's game, Stevens said something about had Sully been available he might have started Kelly next to him. So, I'm taking a wild guess on my pick. Maybe we should have a predict the starting lineup contest for every game.

Like the Celtics, the Bucks have several new players and are trying to build past being a middle of the pack team. This is a very winnable game if the Celtics come in and play with energy for 48 minutes.

As the Brad Stevens' and his new team, makes their home debut at TD Garden tonight. The CLNS/CelticsBlog crew will have all of your game coverage handled. Your broadcast crew is Ty Ray and Mike "the Scotsman" Munger. Brian Langford will be stationed in the chat-room at CelticsBlog and manning the CLNS social media outlets. Nick Gelso, B-Paul, and Sean Bakke will all be checking in from TD Garden following the game.

Jeff Green had a big game and showed the aggressiveness that the Celtics need from him in the first game. The big test will be whether he can do it two games in a row.

After serving a suspension in the first game, this will be Jared's first regular season game. The Celtics need his presence under the basket and his rebounding. 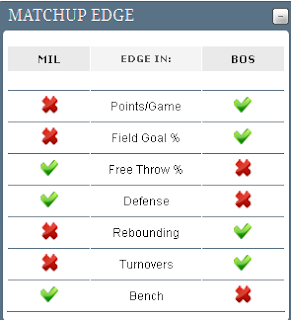 After being courted by the Celtics for the past couple of seasons, OJ Mayo is now with the Bucks. He is capable of scoring in bunches if not defended well.

Last season, Larry Sanders had a couple of big games against the Celtics. He had 18 points and 16 rebounds in one game and 20 rebounds in another. Hopefully the Celtics bigs can contain him in this one.

Attack the Paint - In their first game, the Bucks were outscored in the paint 50-28 by the Knicks. The Celtics need to attack the hoop and not settle for jumpers.

Make Layups - In every game so far, the Celtics have missed way too many bunnies. What should be easy points end up being turnovers or missed opportunities. They have to find a way to make those layups.

Defense - Defense is always a key to winning.

This is the Celtics home opener. The fans will still be hyped from the Red Sox victory on Wednesday and should give the team a nice lift with their energy.

Official Report
Joey Crawford
Over more than three decades in the NBA, Joe Crawford has officiated 2,436 regular season and 318 Playoff games, including 48 NBA Finals games. Crawford’s Playoff and NBA Finals totals are the most among active NBA officials. Over his career, Crawford has officiated the 1986, 1992 and 2000 NBA All-Star Games, as well as the 1993 McDonald’s Championship in Munich, Germany. Prior to joining the NBA, Crawford officiated in the Eastern League (CBA) from 1974-76. He graduated from Cardinal O’Hara High School in Springfield, Pa. and is a member of the Cardinal O’Hara High School Hall of Fame. In 2008, Crawford earned a degree in Liberal studies from Neumann College. Officiating can be considered a Crawford "family affair," as his brother is veteran Major League Baseball umpire Jerry Crawford, and his father is retired Major League Baseball umpire Shag Crawford. He is also very active in his hometown of Philadelphia, Pennsylvania.

Ben Taylor
Ben Taylor is one of two new officials for the 2013-14 season. Taylor joins the full-time staff after six seasons as a referee in the NBA D-League, already having offciated 17 regular season NBA games as a non-staff official. He also serves as an FIBA International Basketball Referee.

Leon Wood
Leon Wood’s connection with the NBA began as a player when he played professionally with Philadelphia, Washington, New Jersey, San Antonio, Atlanta and Sacramento, averaging 6.4 points, 3.2 assists and 1.2 rebounds as a guard during his six-year NBA career. In addition to his NBA playing career, Wood was a member of the Gold Medal winning 1984 United States Olympic Basketball Team, and he won another Gold Medal in the 1983 Pan-Am Games.

During his 17-season NBA officiating career, he has worked 1,052 regular season games and 20 playoff games. Wood has three years of CBA officiating experience and one year of collegiate officiating experience in the Ohio Valley and Trans America Athletic Conferences. He also has one year of high school officiating experience in California. Wood played for the University of Arizona for one season before transferring to Cal State Fullerton, where he was named All-American. The native of Santa Monica, Calif. is an inductee into the Orange County Hall of Fame, and in 1998, Wood was inducted into the Cal State Fullerton Hall of Fame. Wood was a member of the basketball team at St. Monica High School.