In a "bridge Year" full of ups and downs, two Celtic big men are developing some special chemistry. In a season of uncertainty, how far these two progress will go a long way toward determining the organizations go-forward strategy.

There has been a lot to digest thus far this season. Among the array of appetizers on the early season menu, the team's last two first round picks have provided a tasty return on investment thus far. Despite the obstacles faced entering the league, both have shown polish beyond their perceived limitations. Both have also shown skill sets that belay a deeper-seeded, subtle shift in DNA of NBA front courts. The change in hand-checking and general emphasis on perimeter contact has created a greater opportunity for offensive-minded hybrid guards to find success in the league. This shift has brought with it a greater demand for multi-faceted Hybrid Big Men as well.

Centers and Power Forwards have fast become a homogeneous group, to the point where the league eliminated "C" as a position on the All Star team. However, the demands of the "Big Man" have trended beyond simple lateral quickness or the ability to "stretch" a defense in order to invert the offense in favor of guard penetration. With so much time spent playing from the perimeter, it's only natural that the modern Big Man learn to be more than a stationary object outside the paint. The evolution of the position is one of agility and playmaking ability - to have an awareness of how to create opportunity for teammates.

In this vein, Jared Sullinger and Kelly Olynyk are doing just that.

Here are two plays from last night that illustrate this point: (screenshots courtesy of mysynergysports.com)

PLAY ONE: "The Hefty Lefty" (who's actually a righty)

In this shot, KO has great fundamental position for shooting or driving by his defender. KO's feet are well-spaced, with his weight distributed on his left leg. By doing this, he's given himself the ability to shot-fake, shift to his dominant right side, and counter with a drive left. He's also given himself enough space to do this without stepping out of bounds - something far too many perimeter players fall victim to when working their weight distribution moves.You can see that Maxiell is "selling out" to challenge the shot as well. His upper-body is shifted forward, his torso is upright, and his legs are close together. The threat of the shot has left Maxiell vulnerable to the drive because of this. 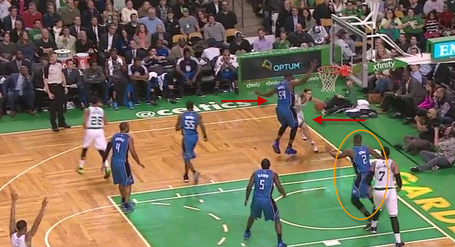 KO maintains eye contact with Sullinger and stays present to the play in front of him. His ability to handle the ball with his off-hand, initiate contact, and negotiate the baseline are impressive elements for any perimeter player. You can see by the red arrows that Maxiell's poor initial technique has compromised his ability to maintain leverage on the play. Olynyk has his weight shifted into Maxiell's body, helping him maintain a low base for optimal control. This action is quickly recognized by O'Quinn, who is forced to help on the play. 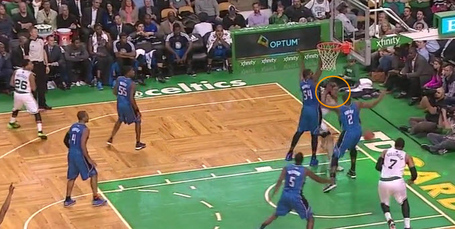 By maintaining eye contact and having the physical agility to combine the athletic attributes necessary for this play, KO finds Sullinger for the easy hoop. Note that Victor Oladipo - aka, The Rookie - failed to react in time to help the helper and potentially negate this play. To give him credit, he likely has little experience with a player of that size attempting a move of that caliber - even #2 picks get caught ball-watching at times. Both O'Quinn and Maxiell are quality players,but each represent the "1.0" version of Hybrid Bigs. They have the strength to defend larger players and can operate as a threat to hit the set shot, but neither is lithe enough to make the "2.0" movements necessary defend or duplicate what Olynyk did here. 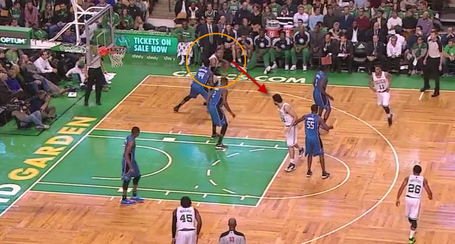 In this first frame, the importance of vision is emphasized again. Sullinger has line of site to Faverani and understands the floor spacing in front of him. This may be categorized as a "post-play" due to body positioning, but Sullinger's distance to the hoop and angle to the basket make this far more of an ISO in technical makeup. Nicholson worked for his position early and has a nice wide base to defend against a tradition power move by Sullinger, if he were to attempt to bull his way toward better post position. O'Quinn once again shows quality fundamental defensive discipline, keeping his primary zone assignment in view while providing help proximity to Nicholson. Sullinger isn't going to gain the right block on his watch. 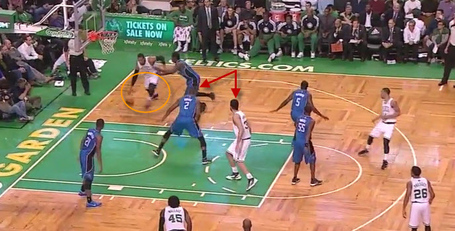 Whoops...Sullinger makes a single power dribble with his left hand toward the middle of the court. At 19 feet out, Nicholson is likely anticipating a few body blows and trusting that O'Quinn has his back. Instead, Sullinger uses Nicholson's slight shift in weight toward the inside to counter with his left shoulder while his body is shielding the ball from view. The shoulder shimmy is a classic set-up move to come back to the opposite side, designed to get the defender to shift leverage away from the intended direction. Instead, Sullinger uses it as a "fake-out". He then commits fully to the baseline spin, keeping a low 2nd dribble with left arm fully extended so he can quickly regain control with his right hand. This is a technique designed for speed, one that necessitates controlling the ball low to the ground, with hand and wrist only. Limiting the distance the ball bounces from the floor makes Sully "fast" on the play and forces three defenders to converge. 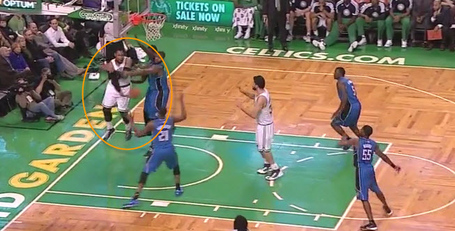 Nothing like a little "hot-sauce" with your BBQ, and Sully spices it up with a tasty underhand scoop as he leaves his feet. Despite the flare, Sullinger never loses sight of his target and makes sure that Harkless commits to the help before delivering the dime - all of this while being leaned upon by nearly 500lbs of tough guy. Imaging how much easier this play would have been for Sully if he were "athletic"....

In both examples, each player exhibited elements to their athletic skill sets and intelligence that have the promise of better things to come. In each case, both players have had early obstacles that have hindered the perception of their impact while on court. Sullinger's weight and conditioning have limited his time on court, while Olynyk's early struggles on the perimeter have kept him in check to some degree. When on the court, these two are accounting for some pretty impressive figures:

Sullinger and Olynyk are certainly not the only ones responsible for defending the interior, but they trail only Brandon Bass in minutes per game, so clearly they are helping contribute to the surprisingly stronger-than-expected interior play thus far. Olynyk has more work to do in terms of his defensive rebounding technique and core strength, but he is clearly part of the solution going forward based on all visual evidence.

The dynamic skills of each will be a very intriguing gift when Rondo returns - be it a Thanksgiving treat or something Santa stuffs under the tree. Their developmental progress is certainly something to watch as we progress toward the new year.

Tank you for your consideration.