Share All sharing options for: Perimeter principles: giving up the long two

Quietly, the Celtics have one of the top ten defenses in the league and much of it has to do with their perimeter play.  Gone are the days when you'd see Kevin Garnett trapping a ball handler to the sideline and the Celtics overloading the strong side of the ball.  There was always that familiar "Ice, ice, ice!" call whenever KG wanted to neutralize a pick.  We hear that occasional with this team, but things are a little different.

Under Stevens, the defense has been less aggressive but so far, almost as effective.  Think of it as trying to deal with a charging bull.  Under Doc and Thibs, the Celtics were like rodeo clowns trying to corral an opposing offense to go where they wanted it to go.  Stevens has employed more of a matador approach, taunting teams to charge him knowing that he's packed the paint with bodies.

Some context here: over the last ten years, old school guys have lamented the death of the mid-range jumper.  According to HoopData.com, the NBA as a whole shot a dismal 38.3% from 16-23 feet last season.  Step outside to the three point line, the rate jumps to 53.8% (factoring in the weighted efficiency of a three pointer).  Stevens is known as a big believer in analytics and you can't ignore these numbers.  Run shooters off the line and make them take inefficent jumpers.

In a way, Stevens is daring teams to hang themselves by the long rope of the long two.  It seems like lazy defense, but if a guy can't shoot, a guy can't shoot.  Check out the shot charts from last night's game against Charlotte: 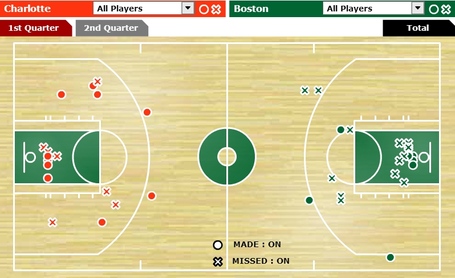 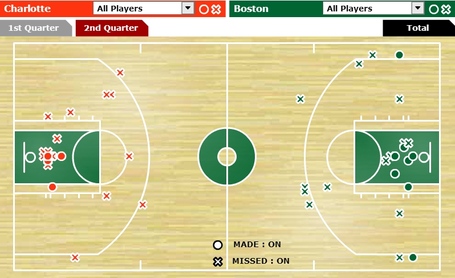 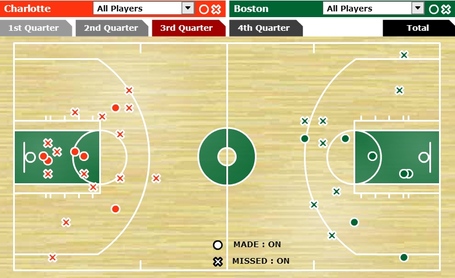 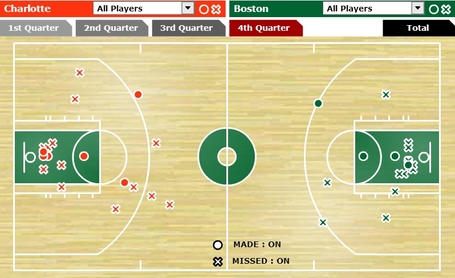 After that first quarter explosion, the Bobcats when cold.  They went 4-20 in the final three quarters.  Here's Gerald Wallace guarding Kemba Walker last night.  Notice how he goes under two screens and neither Humphries or Faverani hedge to contest the shot:

If that's the kind of shot a team is going to take with plenty of time on the shot clock, the Celtics are happy to oblige.  However, if you're behind the three point line, they'll close out on you like attack dogs.  Here, Pressey comes off two picks to find his man with Lee and Wallace rotating back perfectly on the perimeter:

But, it can burn you sometimes.  The Celtics clawed all the way back and had the game within reach in the final minute.  Down two, they needed a stop to have a chance to either tie or win the game in their last possession.  Charlotte cleared the left side of the floor, spread shooters along the perimeter, and ran a simple pick-and-roll with Kemba Walker and Al Jefferson.  Walker, who was at that point 0-9 with his jumper, instead drove the lane.  Olynyk was there to protect the paint and challenged a wild shot, but that freed up Jefferson for a weak side put back.  Ideally, Green or Wallace coulda shoulda woulda dropped down to prevent penetration (allowing their man to take a long jumper) and Olynyk could have boxed out Jefferson but alas, these are the breaks of the pack line defense.

It'll be interesting to see over the next couple of games if the Celtics continue to lay off the mid-range jumper with dates against Lillard, Lin, and Parker.  All are point guards that are capable of hitting the open jumper or driving the lane if given enough space to get a full head of steam.