The Portland Trailblazers make their only visit to the TD Garden this year as the Celtics try to rebound from Wednesday's loss to the Bobcats.

The Portland Trailblazers make their only visit to the TD Garden this year as the Celtics try to rebound from Wednesday's loss to the Bobcats. The Blazers are a tough matchup. They have young and athletic players and they are playing very well together with a 6-2 record.

Jared Sullinger missed the last game with a bone bruise on his knee. He is still listed as day to day but is expected to play in this game. His presence in the paint was sorely missed against the Bobcats and he will be needed in this game against Portland's big front line.

Don't forget to tune in to CLNS Post Game Show immediately after the game. Your broadcast crew is Brandon Paul and Daniel Baker. Brian Langford will be stationed in the chatroom at CelticsBlog and manning the CLNS Radio social media outlets. As always, we will be taking your calls throughout the entire broadcast. 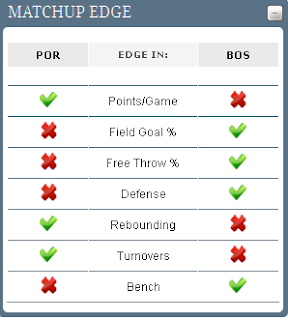 Lillard, last year's Rookie of the Year, is averaging 19.9 points, 5.1 rebounds, and 5.8 assists. He is athletic and is tough to defend. Crawford has been playing well for the Celtics, but he will have his work cut out for him against Lillard.

Aldridge is averaging 21.3 points, 8.8 rebounds and 2.5 assists per game. The Celtics will need to try to keep him out of the paint, where he is capable of doing a lot of damage.

The battle of the hair. Kelly is still finding his place in the league but has all the tools to be very good on any given night.

Energy- The Celtics appeared to be rather lethargic in their game against the Bobcats. They were outworked, and in order to win games, they must work harder than the other team. They need to come out with energy and keep that energy up throughout the game.

Run!- The Celtics won 4 games in a row by running from start to finish. They can get easier shots by getting up the court before the defenses set up. They can't lapse into walking the ball up the court. They have to run, run, and run some more.

Get into the Paint- Good things happen when the Celtics get into the paint and go to the basket. In their 4 game win streak, they averaged 49.5 points in the paint but in the loss to the Bobcats, they only had 38 points in the paint. They must take the ball to the hoop and not settle for jumpers, especially if they aren't falling.

The Celtics have to want this game more and have to fight for it. They will get a boost from the home crowd, but they have to put out the effort and energy to get the win. 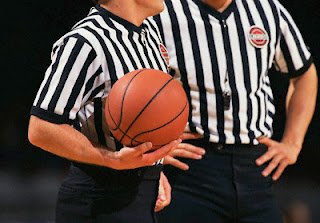 Marc Davis, an avid outdoorsman, has been an NBA official for the past 15 seasons, working 911 regular season games and 43 Playoff games, and the 2007 NBA All-Star Game. Davis has officiated two Finals games during his career. In addition to his NBA experience, Davis has three years of CBA officiating experience and three

Davis was investigated for threatening to whoop Allen Iverson's a** when AI complained about a call in a game in 2005, but was not suspended for it. The Celtics history with Davis goes way back also. In 2009, Davis was seen after a Celtics/Bulls game with his family all decked out in Bulls gear. Can a Bulls fan honestly call a Celtics game without any bias, especially one against the Bulls? One memorable game two seasons ago was a 1 point loss to the Cavs in which Davis and friends ignored a very obvious foul committed against Paul Pierce in the final seconds of the game and in which the Cavs shot 20 free throws to 14 for the Celtics.

In a win against the Hawks two seasons ago with Davis, the officiating was terrible. The Hawks shot 23 free throws to 13 for the Celtics. KG fouled out in that game on a terrible call. They were holding his jersey and had an elbow in his back and they called the foul on KG. Greg Stiemsma fouled out shortly after on two more terrible calls. In the 4th quarter, 12 fouls were called on the Celtics and only 4 on the Hawks. In OT, 4 fouls were called on the Celtics while none were called on the Hawks, even through there were several very obvious fouls committed. Donny Marshall usually doesn't comment on the officiating but said that the Celtics needed to send the tape of that game to the league because Davis made it all about him. Davis also called Game 1 of the Hawks series two seasons ago. There were missed and bad calls the entire game. At one point, the ref at half court called an obvious foul on the Hawks when Davis, right next to the play, failed to call it. The frustration over the lack of calls boiled over and resulted in Rondo bumping Davis and being ejected.

The Celtics are 3-7 in their last 10 games. Most games last season that Davis officiated weren't all that bad. But, the last loss was vs the Bulls and the officiating was terrible. With 12 seconds left, Pierce was trapped and fouled, including a busted lip, right in front of Davis with no call. Rondo was signalling for a time out right in Davis' face but they called a jump ball instead of calling the foul or the time out. Even Hubie Brown was talking about how bad the calls were the entire game and Hubie doesn't usually comment on the officiating. In a win over Detroit, the officiating was again terrible. Detroit took 10 free throws in the first quarter while the Celtics got their first FT with 5 seconds to go in the quarter. Detroit finished with 30 free throws to 22 for the Celtics and there were bad calls and no calls the entire game. The Blazers are 2-8 in their last 10 games with Davis on the court. His home W/L record is 3-3.

He has seven years of collegiate officiating experience in various conferences (Big 12, Sun Belt, Conference USA, Southland, SEC, TAAC, OVC and SWAC), and the Southland Conference semifinal game. Collins also officiated at the high school level in Louisiana. Collins was a member of the Xavier basketball team for four seasons, an honorable mention All-American, and received his Bachelor of Arts degree in Mass Communications. Collins was a victim of both Hurricane Katrina and Rita and basically had to start all over in the aftermath.

The Celtics are 5-5 in their last 10 games with Collins. They were 2-1 last season with the loss being a preseason game with Philly in which the officiating was fairly even. One win was in OT vs the Mavs and the Celtics took 30 free throws to 17 for the Mavs. The Celtics are 1-0 this season already as he called the win over Miami and the officiating wasn't too bad in that game. They missed calls both ways. The Blazers are 6-4 in their last 10 games with Collins. He's definitely not intimidated by the home crowd. His home W/L record this season is 1-6.

Haywoode Workman has officiated 261 regular season games in his first five NBA seasons. A second round draft pick by the Atlanta Hawks in 1989, he played professionally for eight seasons in the NBA and overseas betweeen

Workman spent four seasons officiating in the NBA Development League and also officiated in the CBA before joining the NBA. Workman joins Bernie Fryer and Leon Wood on the short list of NBA players who have made the transition to officiating.

Workman was an All-State quarterback in North Carolina in 1983 and played in the NC/SC Shrine Bowl. He played one year of football and basketball for the all time winnigest HBCU coach, the late Clearence "Big House" Gaines, at Winston-Salem State University. He was inducted into the Oral Roberts University Athletics Hall of Fame in 2003.

The Celtics are 1-0 this season and 5-5 over the last 10 games with Workman. There hasn't been a lot of controversy over his officiating. Unlike some of the NBA officials, he keeps a fairly low profile. He has not been noticeable one way or the other in any of his games with the Celtics. The Blazers are 4-6 in their last 10 with Workman. His home W/L record is 1-4 this season.