Celtics continue road trip with a stop in Houston

Share All sharing options for: Celtics continue road trip with a stop in Houston

The Celtics start yet another back to back set with a stop in Houston to take on the Rockets. The Celtics have lost 3 in a row and are looking to get back on track with a win here as it doesn't get any easier with the Spurs on Wednesday and the Pacers on Friday.

The much improved Rockets have won their last 2 games and are hoping to continue their win streak. The Celtics are 2-4 on the road while the Rockets are 4-2 at home.

With Dwight Howard manning the middle for the Rockets I expect Vitor Faverani to get the nod to start for the Celtics once again as Kelly Olynyk just doesn't have the muscle to keep Howard out of the paint.

Don't forget to tune into the CLNS Post Game Show right after the game. 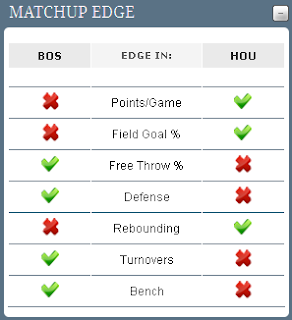 Harden is always a threat to score and so Avery will need to be at his defensive best to keep him from going off.

Vitor will need to show his muscle to keep Dwight away from the basket where he is most dangerous.

Defense - The Rockets have the #2 ranked offense in the league. The Celtics defense has been slipping. It's important for them to play tough defense as it will be very difficult to outscore the Rockets high powered offense if they don't.

Take Care of the Ball - After keeping their turnovers down during their 4 game win streak, the Celtics are back to turning the ball over too much. They had 21 turnovers against the Wolves and they must cut that number down.

Rebound - The Rockets are #1 in the league in rebounding with 47.5 per game. The Celtics are 25th with 40.9 rebounds per game. Much of rebounding is effort and energy and the Celtics must show both and crash the boards to keep the Rockets from getting easy points off rebounds.

Effort and Energy-The Celtics simply don't have the talent to beat teams on talent alone. They must win with energy and effort and grit. They have to be the team that wants it more and that works harder for the win.

Move and Share the Ball - The Celtics have got to get back to moving the ball up the floor quickly as they did in their 4 game win streak. That allowed them to get easy baskets before the defenses set up. They also have to share the ball. During their win streak, they made the extra pass and found the open man. They averaged 23.3 assists during their win streak but are at 15.3 during the three-game losing streak. They are lapsing into too much dribbling and one on one play.

The Celtics are on the road and are in the midst of a tough stretch. They need to keep their focus in order to win despite travel, hostile crowd and fatigue.

A veteran of 23 NBA seasons, Mike Callahan has officiated 1,365 regular season, 130 Playoff and 14 NBA Finals games. He was a member of the crews that officiated the 2007 NBA All-Star Game, 1994 Mexico Challenge and the 1996 Schick Rookie Game. Prior to joining the NBA, Callahan spent three years officiating in the CBA, including the 1989

Callahan has run a clinic for referees called "Hoops4Heros" that benefits local fire departments, and he maintains strong ties to the Philadelphia community through his volunteer work with the Don Guanella School for developmentally disabled boys.

The Celtics 4-6 over their last 10 games with Callahan officiating. In a win over the Jazz last season, Callahan's officiating inspired a classic rant by Tommy about an especially bad traveling call he made on Jeff Green. Against Denver last season, the Celtics shot 16 free throws to 36 for the Nuggets and the officiating was terrible. In other games last season, the officiating was ok. The Celtics are 0-2 this season including a loss to the Nets in the preseason and a loss to the Charlotte Bobcats. In both games, the officiating wasn't a factor. As with most refs, Callahan can be good or he can be very, very bad. The Rockets are 4-6 over their last 10 with Callahan on the court. He usually lets the teams play and isn't a tyrant with the whistle but still makes some head scratching calls from time to time. His home W/L record this season is 5-3.

Derek Richardson has officiated 943 regular season games and one playoff game, as well as the 2003 NBA Rookie Game in Atlanta, during his 16 seasons as an NBA official. Prior to joining the NBA, Richardson spent eight years

Richardson is known for being inconsistent with his calls, especially on charge/block calls. The Celtics are 0-1 this season and 9-1 over their last 10 games with Richardson. The loss this season was to the Jazz where the Jazz shot 18 free throws to 14 for the Celtics and the refs pretty much let them play. The Rockets are 4-6 over their last 10 games with Richardson as a ref. He was a crew referee in 4 games last season without any calls standing out one way or the other. His home W/L record this season is 5-1.