After last night's drubbing, what can Houston's offense teach us about the Celtics' deficiencies?

Share All sharing options for: The Celtics want to be more like the Rockets (on offense) when they grow up

Coming into the season, the Celtics and Rockets stood at opposite ends of the spectrum in terms of expectations and roster construction.  Boston, of course, had finally committed to a rebuild, sending its core of star veterans packing and entering training camp with a jumbled, inexperienced roster. Conversely, Houston won the Dwight Howard sweepstakes a year after trading for James Harden, two moves that have firmly cemented the Rockets as contenders for years to come.

And during last night’s game, the polarity between the two franchises was evident on the court as well. As they demonstrated on Tuesday, the Rockets own one of the most efficient and potent offenses in the league, averaging 108.8 points per game and placing fourth overall in offensive rating (108.8).  In comparison, through 12 games, Boston’s offensive output has been meager, with the Celtics scoring a fifth-worst 93.4 points per night and generating a 98.9 offensive rating, good for 26th in the NBA.

Yet, in some ways, the two teams aren’t as different as their play yesterday might indicate.  Both are fully committed to using analytics and advanced stats in measuring team performance and in looking for an extra edge against opponents.  Consequently, both franchises are well aware of the kinds of shots on offense that lead to consistent success and efficiency.  The recent mantra in most analytical circles has been about how wasteful and ineffective the two-point shot jump shot is, especially considering how much more often players make shots in the paint and how the three-pointer (just a few feet further out) can yield a far greater reward.

With last night’s result in mind, then, let’s compare the Celtics and Rockets in terms of shot selection.  What gives the Rockets such a high-scoring attack?  What does that tell us about Boston’s struggles so far, and perhaps more significantly, the limitations of the team’s current roster?

Courtesy of NBA.com’s new stats page, below are each team’s shot charts for the season. 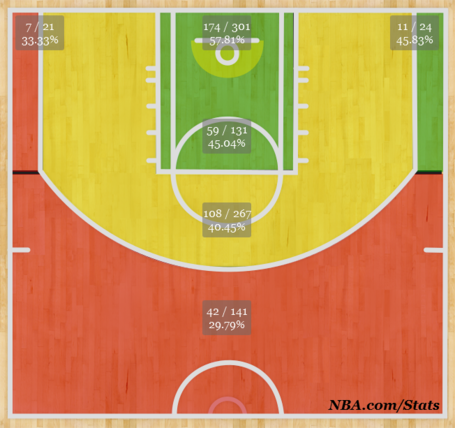 Even from this first chart, it’s pretty clear where the Celtics’ main weakness on offense lies.  Despite some initial success from Jeff Green and Courtney Lee on three-pointers, the C’s haven’t cashed in on their shots from behind the arc.  They have actually been pretty solid in the paint area—a good sign moving forward—but much of that has been neutralized by all the mid-range jump shots they have taken, accounting for 30% of their total field-goal attempts, according to NBA.com. 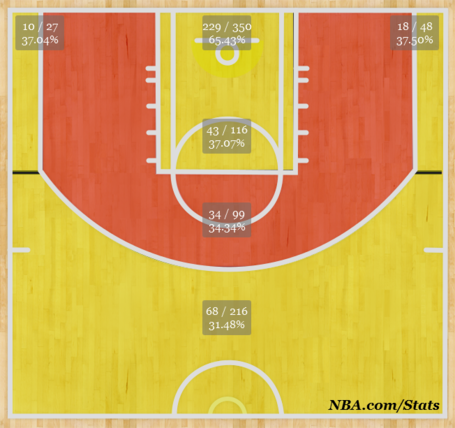 In comparison, Houston hasn’t exactly dominated from inside the paint or from three-point land, but so many of their opportunities come from these two types of shots, that their offense has been great regardless. Unlike the Celtics, who have taken 267 two-point jumpers from outside the paint, the Rockets have taken just 99, making up only 11% of all their field goal attempts this season.

The two shot charts below, courtesy of Vorped.com, demonstrate these differences in shot distribution for each team . 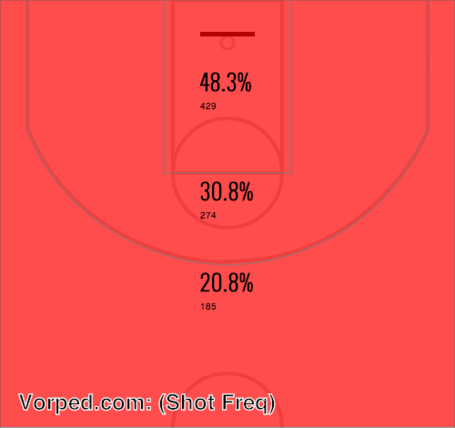 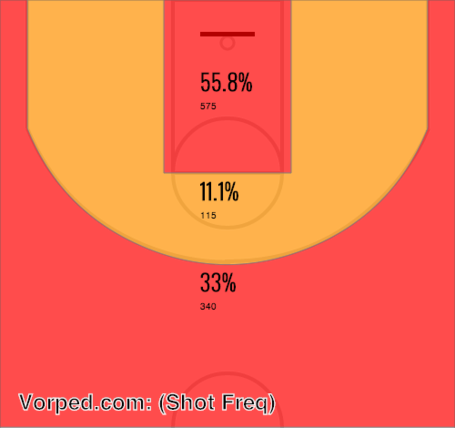 In many ways, the Rockets offense is what the next Celtics contender will aspire to be.  They can attack the basket off the dribble, punish opponents with a bevy of capable shooters, and also score in the paint area.  Most importantly, the Rockets stay away from long two attempts as much as possible, maximizing shot efficiency with the type of consistency Ainge and Stevens likely hope to institute in Boston.

Just a simple look at last night's shot chart shows how wide a gap there currently is between the two offenses.

As others, including many of my fellow CelticsBlog contributors, have pointed out, this Celtics roster just isn’t built to perform like Houston's right now.  You can bet the next contender that Danny Ainge builds will be far better equipped to get into the paint for high-quality looks and take advantage of open three-point opportunities.  That reality just remains a few draft picks, trades, and (probably) seasons away.