Does Gerald Wallace have the yips?

Is Crash scared to shoot?

Share All sharing options for: Does Gerald Wallace have the yips?

Has Gerald Wallace come down with a case of the yips? In 309 minutes this season, Wallace hasn't attempted a single shot from mid-range. Kurt Helin of ProBasketballTalk.com believes that Wallace is scared of shooting.

The Extra Pass | ProBasketballTalk
Wallace has the yips. Much like a player who suddenly can’t throw to first base, he’s completely in his own head. You can hide a little better on the court than on the diamond, but it’s still pretty apparent that something is up.

Wallace’s struggles shooting the ball began when he was traded to the Nets, and he’s deteriorated offensively ever since. Wallace has flat out stopped shooting altogether this year, as he’s averaging just 5.2 shots per 36 minutes. That’s less than half the attempts he’s averaged on his career.

In 309 minutes this year, Wallace hasn’t attempted a single shot that wasn’t at the rim or a three-pointer. Not a one. From the free throw line, he’s a dreadful 5-for-17.

Wallace has been incredibly outspoken about Boston’s poor play this year, citing selfish play as the root of the problem. Is Wallace making a point with his decision not to shoot, or is he searching for a way to justify his fear of shooting?

I knew Gerald Wallace was passing on his shot quite frequently this year, but I'll admit that I never realized he hasn't attempted a single shot from mid-range. Still don't believe me? Check out his shot chart: 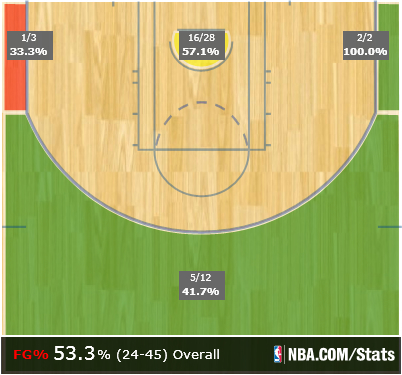 See all that empty space in the paint, at the elbows, from the short corner, and the top of the key? Yeah, it's true; Gerald Wallace hasn't attempted a single shot from there. His field goals have come from three-point range, where he is 8-of-15, and from the rim, where he is 16-of-28. Isn't it hard to believe?

But this presents the question: Is Gerald Wallace scared to shoot because his skills have regressed or is he just playing within Boston's system?

O'Connor argues that Wallace is playing within the system

Gerald Wallace realizes that he isn't the player he once was, and is instead trying to maximize his abilities as a distributor, all while putting the majority of his energy into the defensive end of the floor.

Last season Gerald Wallace said his confidence was totally gone, and his nearly career-low shooting numbers indicated that. This year, that isn't the case. Wallace is actually shooting quite well; he's just not shooting very often at all.

But that could be because of the system, since Brad Stevens preaches that the Celtics take three-pointers instead of deep twos. This caters towards Wallace's skill-set, since he has never really been a player to dribble into a 16-foot jumper. Throughout his career, the majority of his field goals have come at the rim, and he has consistently attempted more three-pointers than mid-range jump shots. Here is his shot distribution chart going back to 2007:

As the statistics suggest, Wallace has consistently taken the majority of his shots at the rim or in the paint, which is not surprising since he is known for his slashing abilities.

These numbers also indicate is that he has never been one to look for mid-range jumpers. Out of the past seven seasons, Wallace has attempted more mid-range jumpers over three-pointers only twice.

What I find most interesting is that his mid-range field goals have steadily declined since 2010. That year, 25 percent of his attempts came from mid-range, and that dropped all the way to 10 percent in 2012. While this has happened, the frequency of his three-pointers has increased each year.

I believe Gerald Wallace knows more than anybody else what he is capable of. At this point in his career, he is at his best when shooting from three or at the rim. Attempting shots from mid-range would only go against Stevens' system, and therefore would only hinder the team offensively. Wallace is playing within himself, and isn't trying to be the player he once was.

With that said, there is no denying that Gerald Wallace is declining rapidly. At 31-years-old, this is Crash's 13th season, and he has battled a number of nagging injuries over the years due to his hard style of play.

But is this an excuse for his lack of efficiency on the floor? For an alternative perspective, I asked Chris Fischer of CelticsBlog.com.

Fischer argues that Wallace is a liability

I think Gerald Wallace is a big part of the offensive struggles of the C's. He's become a Ben Wallace or Kendrick Perkins type offensively. It is not just his shot selection, taking 3s and layups isn't the worst strategy in the world for a role player. Instead it is that he's not a threat at all on offense.

His usage is down to 11.3, a career low. Per 36 minutes he is taking 5.1 FGA and just 1.9 FTA while managing 3.3 turnovers and 3.9 assists. He's had more turnovers than made baskets. This has left him with an offensive rating of 88, its hard to get an offensive rating that low when your shooting efficiency isn't bad, .581 TS%.

Gerald Wallace has been a slasher and a driver on offense throughout his career, an aggressive player on both ends of the court. That's why he was called Crash. Now he lacks that aggression and his skills don't fit the "3 and D" role player type role that Shane Battier plays. He's not a deadeye three-point shooter that can space the floor. Instead he's the guy that is left without a defender within 15-feet at the three-point line if necessary to stop other offensive threats. Even worse he often hesitates to take that shot. If you're going to stand at the three-point line, you have to take those shots.

A quick glance at the new NBA player tracking data shows that Gerald Wallace has gotten the ball in the half court and touches in roughly similar amounts to Jeff Green and Brandon Bass. But he's not doing anything with those touches.

Wallace's issues started last year and have carried over to his new team and gotten worse and are hurting the Celtics badly on offense. You can't play an offensive zero at the small forward position 27 minutes per game on this Celtics team. With every loss Wallace voices his displeasure with the team, sometimes about selfish play. But simply not shooting is not unselfish basketball.

What do you think? Am I right, Wallace just playing within the system? Or is Chris right, Wallace has declined to the point of no return? Or are we both correct? Let us know in the comments below and be sure to vote in the poll.