And, it gets worse as the Celtics face the West leading Spurs in the second of back to back games.

Share All sharing options for: Celtics back (to back) on the court as they try to end 4 game losing streak

The Celtics won't have much time to think about last night's loss to the Houston Rockets as they have to move right back into the fight with a game against the West leading Spurs.

The Spurs 9-1 record may be a bit misleading in that all 9 victories were against teams with sub .500 records. They should be well rested for this game as they have had off since Friday, while the Celtics are playing in back to back games and the 3rd game on a tough road trip.

I went with the same starting lineup as the Houston game, but after the poor start that the Celtics had against the Rockets, I wouldn't be surprised to see a shake up in the starting lineup, even if just at center. 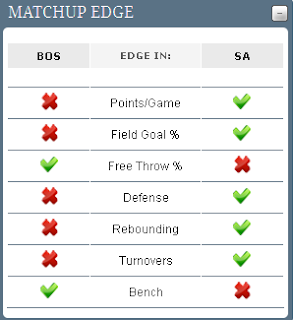 Tony Parker is a scoring point guard who is going to give Jordan Crawford a tough time. I expect to see Avery Bradley guarding Parker if he gets hot in this game. At the same time, Parker's defense will make things difficult for Crawford.

Brandon will have his hands full in this matchup. Duncan may have lost a step, but he still brings a lot to the table, especially defensively. He is great at getting position for rebounds and tip ins and Bass and the other Celtics bigs need to concentrate on keeping him away from the basket.

Get the Offense on Track- The Celtics shot a season worst 32.3 percent against the Rockets. They missed many open shots and quite a few around the basket. Now they face a Spurs team that ranks third in the league in defense, giving up just 89.3 points a game. The Celtics have got to find a way to make their shots.

Start Strong and Play 48 Minutes - The Celtics stayed with the Rockets in the final 3 quarters, but unfortunately, the damage was already done by a sluggish start and they were never able to recover. They have to find some consistency where they can start strong and play well for 4 quarters.

Rebound - Much of rebounding is effort and desire. The Celtics need to do both if they hope to beat a tough Spurs team and they will need to crash the boards to prevent second chance and fast break points from the Spurs.

Be Aggressive - During the 4 game win streak, the Celtics were aggressive in going after loose balls, taking the ball to the hoop and playing in your face defense. When they get lazy and allow teams to beat them to loose balls and rebounds and when they settle for jumpers and don't go to the basket, they are very beatable. They have to be aggressive in going to the basket and not settling for jumpers. They must be aggressive from the opening tip to the final buzzer.

Run, Run, Run - The Celtics are not a half court team and they look terrible when they try to play that way. They have to run in order to get easy opportunities before the defenses set up. Too often in this losing streak they have settled for walking the ball up the court and playing a half court game. They need to run on every possession.

The Celtics have had a very tough stretch this month and have to be tired. Can they shake off the fatigue and continue to play hard? Can they keep their mental focus and not let the losing streak get in their heads?

The win this season was over the Magic where Orlando took 23 free throws to 15 for the Celtics but the officiating was good and they pretty much let them play. The Spurs are 8-2 over their last 10 games with Malloy. He isn't necessarily influenced by the home crowd. His home W/L record is 3-4.

Mark Ayotte completed his ninth NBA season having officiated 532 regular season games. Prior to joining the NBA, Ayotte was a WNBA official for four years and a CBA official for three years. He spent one year officiating in the NBA D-League.

He has 10 years of high school officiating experience in the state of Arizona. Prior to becoming a professional basketball referee, Ayotte worked as a Systems Design and Test Engineer with AG Communication Systems. When not on the hardwood, Ayotte enjoys spending time with his fellow Yoopers in the Upper Peninsula of Michigan.

The Celtics are 1-0 and 4-6 over their last 10 games with Ayotte. Last season, he called a win over the Nets in the preseason and a loss at Detroit and the officiating was ok in both. He also called the loss to the Lakers in LA where they took 31 free throws to 20 for the Celtics and most of the questionable fouls went LA's way. He called the win over Orlando this season along with Malloy. The Spurs are 7-3 over their last 10 with Ayotte. Ayotte was one of the refs in the Mavs/OKC game last season in which Marc Cuban was fined $75,000 for criticizing the referees as among the worst he has seen. Ayotte has a home W/L record this season is 4-3.

David Guthrie enters his ninth season after officiating 447 regular season games and six playoff games. Prior to joining the NBA, Guthrie was an official in the CBA, NBA Development League and the New York City Pro Am. He participated in the D-League playoffs in 2003, 2004 and 2005 and the DLeague championship games in 2004 and 2005. He officiated at the collegiate level in the ACC, SEC, Colonial, Southern, OVC, ASUN, Big South and SWAC conferences and participated in the 2003 and 2004 NCAA tournaments.

Outside of his life in basketball, Guthrie was a member of the Cincinnati Reds organization playing professionally with the team in Princeton, W. Va., Billings, Mont., Charleston, W.Va. and Chattanooga, Tenn. He attended both Southern Union Community College in Wadley, Ala. and North Carolina State University on baseball scholarships. He played in the Cape Cod Wooden Bat College Summer League for the Falmouth Commodores in 1994 and played baseball and basketball at W.Va. Berry High School in Birmingham, Ala.