Is Avery Bradley returning to his 2011-12 form when he showed us flashes of a sharp shooting stroke?

Share All sharing options for: Avery Bradley has been one of the Celtics biggest surprises offensively in 2013-14

Whenever Celtics combo guard Avery Bradley is brought up in NBA circles we tend to instantly begin discussing the massive impact he has on the defensive end of the floor, and with good reason. After all, Bradley has always been considered to be one of the best perimeter defenders in all of basketball and he solidified that notion last year when he earned a spot on the league’s All-Defensive second team.

His offensive game, on the other hand, is something that has been largely scoffed at over the course of his four years spent in the NBA. With a career average of 7.4 points per game on 43.7 and 32.1 percent shooting from the field and beyond the arc, respectively, Bradley has never been seen as someone who’s going to shoot the lights out on any given night. In fact, the best shooting season of his career, 2011-12, when he shot nearly 50 percent from the floor and just over 40 percent from downtown has been widely thought of as a fluke due to the significant drop offs he suffered the following season. However people are quick to forget that Bradley was coming off two shoulder surgeries (one on each) that he underwent during the summer of 2012. Not to mention the fact that he was thrust into playing the point guard position, a role that he had never played before, when Rajon Rondo went down with a partial ACL tear in his right knee that effectively put a premature end to his season.

Well, consider this: Bradley is shooting nearly 50 percent (chart A) or better (mostly better) from four out of the five midrange locations on the floor (all of which are above the league average) and approximately 47 percent (chart B) of his 179 field goal attempts have come from that 16-24 foot range. So, not only is Bradley making the most of his opportunities with the midrange jumper but he’s also making a point to get as many looks as possible from the areas on the floor where he’s most effective. Whenever you're able to combine your skill level with self-awareness good things are going to happen and Bradley has proven that to this point in the season. 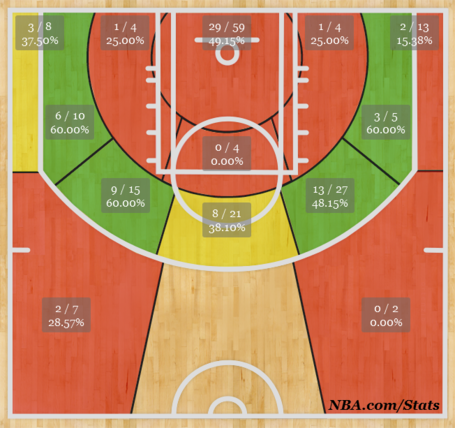 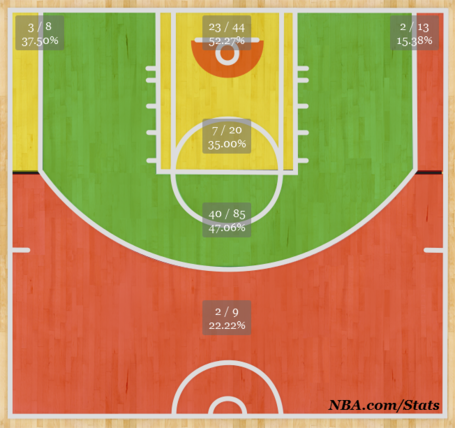 In addition, you could argue that Bradley’s overall field goal percentage would be closer to that 50 percent mark were it not for the unfortunate three point shooting slump he’s currently in (23.3 percent). Luckily, it's his 83 percent conversion rate at the free throw line (the best of his career) that has allowed him to maintain an effective field goal percentage, a statistic that takes field goals, three pointers, and free throws into account, of 45 percent (the second best of his career, per Basketball-Reference).

Sure, this may be a very small sample size given the fact that the Celtics have only played 13 games but you could also say the same about his struggles beyond the arc as Bradley has never shot below 30 percent when he takes at least 50 shots from that distance in a season. If he continues to put the work in and starts to expand his range as the season wears on then I would fully expect him to get up towards that 35% mark in 2013-14. But, as it stands, I think it’s safe to call Bradley one of the elite midrange jump shooters in the NBA today.

All stats are courtesy of the NBA.com statistical database unless otherwise noted.