Share All sharing options for: It doesn't get any easier for the Celtics as they take on the 10-1 Pacers

The Celtics host the Pacers for the first of 4 meetings between these two teams this season. The Pacers lead the East with a 10-1 record and are playing very well. The Celtics swept the series last season and have won 4 in a row vs the Pacers. They have also won 9 of the last 10 in Boston.

The Pacers return their whole starting 5 from last season, which gives them a distinct advantage over teams like the Celtics who are still trying to mesh new players together. The Pacers starters are all scoring in double figures.

Both teams last played on Wednesday and both are playing in the first of back to back games. The Celtics are 2-3 at home while the Pacers are 4-1 on the road. The Celtics need to play as a team and with energy in order to even stay in this game.

Don't forget to tune into the CLNS Post Game Show right after the game. Your broadcast crew is Sean Bakke and Daniel Baker. Calvin Chamberlain will be stationed in the chatroom at CelticsBlog and manning the CLNS Radio social media outlets. As always, they will be taking your calls throughout the entire broadcast. 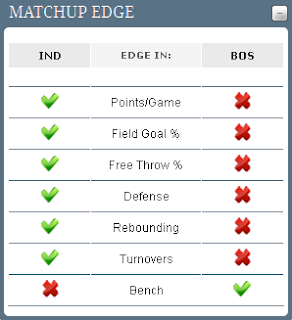 Roy Hibbert is a nightmare for pretty much anyone to match up with and the Celtics only choices here are two rookies. Stevens said after the Spurs game that he liked the Sullinger/Olynyk pairing but he may go with Faverani since he has a bit more muscle to deal with Hibbert, who is averaging 11.4 points, 8.9 rebounds and an incredible 4.4 blocks per game.

Run on Every Possession - The only hope that the Celtics have of getting easy shots would be to run every time they have the ball. They can't win in a half court game with the Pacers.

Go to the Hoop - When the Celtics attacked the basket against the Spurs, they were able to stay with them. When they lapsed into shooting jumpers, they fell behind. The Celtics have to try to get into the paint on every possession.

Move the Ball and Find the Open Man - The Celtics play better when they move the ball and make the extra pass. When the guards over dribble and the ball sticks, they become very predictable and end up going into scoring droughts.

Energy and Focus - The Celtics need to be the team that wants to win more. They have to attack and run and play with more energy than the Pacers if they want to win.

The Celtics are home and should get a boost from the home team. The Pacers may take the Celtics for granted and look past them to their game on Saturday and if the Celtics put out the effort, they may be able to sneak this one out.

Over his 25 NBA seasons, Derrick Stafford has worked 1,504 regular

season, 113 playoff, and seven Finals games. He was a member of the crews that officiated the 1992 Legends All-Star Game in Orlando, the 1997 McDonald’s Championship in Paris and the 2002 NBA All-Star Game. The 24-year NBA officiating veteran has also served twice on the Executive Board of the National Basketball Referee Association. Stafford has six years of CBA officiating experience, and he officiated Pro-Am basketball for six years. He also has seven years of collegiate officiating and 10 years of high school officiating experience in Georgia where he worked the state finals. While at Morehouse College he played football for two years and baseball for four. Stafford made All Conference three years in baseball and led the confereence in hitting in 1978. He was also co-most valuable player in baseball with NFL referee Jerome Boger in 1976. Stafford is the founder and president of his own foundation, "Don’t Foul Out, Inc.".

Stafford is known to be quick to call technical fouls. Pat Riley and Stafford have a bit of bad blood between them. Back in 2003 when Riley was coaching, he accused Stafford of shouting "It's not about you." at Riley when Riley complained excessively about the calls. Stafford was suspended for 2 games as a result. Stafford was also fined as a result of a complaint that Lawrence Frank made when he was coach of the Nets. A ref has to be pretty bad to be suspended or fined for an incident since the league usually feels that they can do no wrong. I found 4 other articles detailing complaints about Stafford for his actions or comments. It seems that Mr Stafford is a hot head who loves to lash out at players and coaches who question him. Hopefully he has mellowed a bit, but Brad Stevens' calm demeanor should be a benefit when dealing with Stafford.

Brian Forte, who is the son of retired NBA referee Joe Forte, has officiated 334 regular season games in six NBA seasons. He also officiated the 2011 NBA All-Star Rookie/Sophmore game and was selected as an alternate for last seasons playoffs. He worked for six seasons in the NBA Development League, officiating 126 games. During that time he worked two NBA Development League Finals. He also officiated in several college conferences, including the Southern Conference, where he officiated the 2007 conference tournament final, and the Southeastern Conference, where he was selected to officiate the 2007 conference tournament. Forte also was selected to officiate the 2007 NCAA Tournament. Forte was the object of Tommy's wrath in the classic rant that follows (the T was later rescinded). The officiating in that game was bad both ways.

Forte was one of the refs along with Eddie F Rush that officiated a Celtics win in Indiana last season. The officiating in that game was horrible and very one sided toward the Pacers. One of the comments from the Pacers' forum said that they wouldn't blame Celtics fans if they punched out the refs. Tommy also had this to say, "I hope this group of officials doesn't officiate the playoffs. Holy cow! They are terrible." The Celtics are 0-1 this season, losing to the Wolves in the preseason. They are 7-3 over their last 10 games with Forte as a ref. Another win last season was over the Jazz and the officiating was even. The third win was another Pacers game where the officiating was terrible. They called 12 fouls on the Celtics in the first half compared to just 5 on the Pacers. The second half was called a little more even but the questionable calls all went against the Celtics. The Pacers are 4-6 over their last 10 games with Forte. He is not influenced by the home crowd. His home W/L record this season is 4-5.

Eli Roe has officiated 443 regular season games during his first eight NBA seasons. Prior to joining the NBA staff, Roe officiated in the CBA, NBA Development League and WNBA. He officiated in the NBA D-League Finals for two years, the D-League playoffs for four years and the WNBA Playoffs for two years. At the collegiate level, Roe refereed in the SEC, ASUN and OVC conferences and numerous Division II and III, NAIA and Juco league games. He also worked in four Division I postseason conference tournaments.

Roe tends to be inconsistent in his calls and can make the calls favor one team over another on any given night. He is also inconsistent with block/charge calls. In an OT loss in Chicago last season, the officiating was terrible. With 12 seconds left, Pierce was trapped and fouled directly in front of Roe. Pierce was hit and his lip was bleeding. Rondo signaled for a time out in Marc Davis' face but Roe called a jump ball instead of the time out or the foul. Even Hubie Brown, who very rarely ever says anything about the officiating, complained about that one. Rondo and Sully both fouled out and there were bad calls all night.

In Roe's final game with the Celtics last season, a win over the Clippers, Roe made so many bad calls that Tommy yelled "Eli! I hate Eli! I hate him!" Two other games with Roe last season were well officiated. The Celtics are 1-0 this season with Roe, with the win coming in the preseason to the undermanned Nets. They are 7-3 in their last 10 games with Roe. The Pacers are 7-3 in their last 10 games with Roe. Another ref who is not influenced by the home crowd. His home W/L record this season is 3-4.