After just one game at home, the Celtics are back on the road to take on the Hawks in Atlanta.

After just one game at home, the Celtics are back on the road to take on the Hawks in Atlanta. This is the first of 4 games between these two teams. The Celtics would love to hand the Hawks a loss for more reasons than one.

First and foremost, the Celtics have lost 6 in a row and they very much need a win. Second, the Celtics will more than likely get the Hawks pick in the 2014 draft from the Nets trade and handing them another loss may just move them up a spot.

The Celtics are 2-6 on the road, while the Hawks have been playing well at home with a 4-1 record at Philips Arena. Both teams are playing in the second of back to back games and both teams had to travel to get to this game. The Celtics are in the midst of playing 5 games in 5 cities in 7 nights, which is brutal for a young team just trying to find their way.

The starting front court is up in the air for this one. Brad Stevens liked the Sullinger/Olynyk combination and went with them two games in a row. But, Olynyk rolled his ankle in the Pacers game and didn't make the trip to Atlanta with the team. Sully has "flu like symptoms" and had to have IV fluids before the Pacers game and was running a fever so his availability for this game is up in the air. Needless to say, if neither can play, the Celtics will struggle to deal with Atlanta's tough front line.

Jared Sullinger (under the weather) questionable 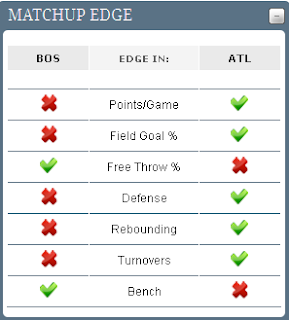 It will be strange to see the Hawks without Josh Smith but Paul Millsap is playing very well for them, averaging 16.1 points and 7.2 rebounds per game. With Kelly Olynyk rolling his ankle and Jared Sullinger under the weather, it's not certain who the Celtics will start in the front court. Either Brandon Bass or Jared Sullinger will have to contain Millsap and also have to make him work on defense.

Once again, the Celtics front court may be Sullinger/Olynyk or Bass/Faverani, or maybe even another pairing. Horford is a force inside and is averaging 17.4 points and 8.2 rebounds per game and whoever starts at center will have his hands full.

Take Care of the Ball- The Celtics turned the ball over 21 times vs the Pacers and the turnovers was one of the reasons that the Celtics couldn't hold their lead in the second half. They must focus on their passes and not give extra possessions to their opponents.

Rebound the Ball - The Celtics were out rebounded by 10 vs the Pacers. They must crash the boards to keep the Hawks from getting second chance points and also fast break points. Much of rebounding is effort and desire and the Celtics must have more of both against the Hawks if they want to win this.

Move the Ball The Celtics had just 11 assists in the loss to the Pacers. They did great in the first half moving the ball and they went into half time with a lead. But in the second half, the ball seemed to stick and they stopped moving the ball, and they lost the lead. They have to move the ball and find the open man.

Both teams are playing in back to back games, but the Celtics are in the midst of 5 games in 5 different cities in 7 nights, which is a brutal stretch for any team. Fatigue may be starting to set in. Also, they seem to lose focus as the game goes on. Can they keep their focus for 48 minutes and get the win?

David Jones has officiated 1,435 regular season games and 59 playoff games throughout his 24 seasons as an NBA official. In addition, Jones officiated both the men’s and women’s 2000 Olympic Bronze Medal Games. Jones has eight years of collegiate officiating experience in the Southeastern, Trans-American Athletic, Metro and Sunshine State Conferences. Jones enjoys working with the community by volunteering with the Boys & Girls Club of Alachua County in Florida and with the American Heart Association.

He was one of the refs who helped to train Tim Donaghy and was very outspoken in condemning Donaghy's actions and felt that Donaghy's actions took the "ethics and integrity of the profession and threw them out the window." I guess he hasn't looked very hard at the current crop of refs that lack ethics and integrity. The Celtics are 0-1 this season, with the loss being to the Grizzlies. They are 1-9 in their last 10 games with Jones while the Hawks are 7-3 in their last 10 with Jones. Although the opponents took more free throws than the Celtics in all 5 games last season, none were particularly terribly officiated. Jones' home W/L record this season is 5-4.

Poole joined the NBA officiating staff 10 years ago and has officiated 521 games. After three seasons in the NBA Development League, where he worked the postseason each year, Poole spent 12 years in the college ranks in the Southeastern Conference, Big East, Atlantic 10, Conference USA, Big 12, Southern Conference, Ohio Valley Conference, and Atlantic Sun Conference. He officiated the NCAA Tournament from 1996 through 2004, including the 2004 NCAA Final Four. While attending Newport News Apprentice School, he received Basketball MVP honors three out of four years.

The Celtics are 0-1 this season, losing by one point to the Knicks in the preseason. They are 6-4 over their last 10 games with Poole as a ref. He called wins over Toronto, Denver, and Houston and the loss to the Kings last season. The officiating in all of those was fairly even. The Hawks are 1-0 this season and 5-5 in their last 10 with Poole. Unlike some refs, he isn't influenced by the home crowd. His home W/L record this season is 1-5.

A winner of the Vanguard Club Achievement Award in recognition of outstanding accomplishments in the field of sports, Michael Smith has officiated 1,173 regular season and 26 playoff games, as well as the 1997 Schick Rookie Game, the 2000 Mexico Challenge and the 2003 NBA Europe Games.

The Celtics are 7-3 over their last 10 games with Smith on the court. The first 3 games last season were evenly officiated. The last one against Cleveland was terrible. Tommy described it this way: "I don't recall a game when there was such a plethora of terrible calls throughout." The Cavs shot 26 free throws to 22 for the Celtics and the bad calls went both ways. The Hawks are 1-1 this season and 6-4 over their last 10 games with Smith. Smith was one of the referees Mark Cuban received a $75,000 fine for criticizing as being unprofessional and biased in an OKC/Mavs game last season. His home W/L record is 7-3.