The Celtics complete a brutal stretch of 5 games in 5 different cities in 7 nights with a game vs the Charlotte Bobcats.

Share All sharing options for: Celtics continue brutal stretch looking to avenge their earlier loss to the Bobcats

The Celtics complete a brutal stretch of 5 games in 5 different cities in 7 nights with a game vs the Charlotte Bobcats. The Celtics will be happy to get a day off before hosting the Grizzlies at the Garden on Wednesday.

The is the second of 3 meetings between these two teams. The Bobcats won the first game 89-83 at the garden earlier in November. Jared Sullinger missed that game with a knee injury and Kelly Olynyk was unable to contain Big Al Jefferson who scored 22 points and pulled down 11 rebounds.

Kelly Olynyk is still listed as day to day with a sprained ankle and is expected to miss this game. I expect Brad Stevens to go with the same starting line up as against the Hawks since they got the win. Sully is more physical than Kelly and should be more effective in keeping Jefferson from getting inside.

Be sure to check out the Chat during the game and don't forget the CLNS Post Game Show right after the game.. 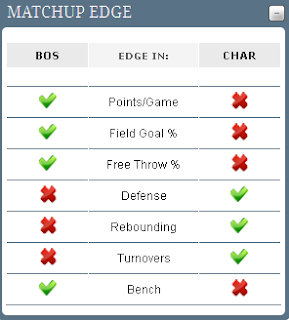 Henderson is averaging 13.9 points, 4.8 rebounds and 2.7 assists per game. He is capable of going off at any given time for big numbers. Avery's defense will be needed to keep him in check.

Big Al got his first win over his former team this season. In the first meeting between these two teams, Al finished with 22 points, 11 rebounds and 2 blocks. Jared didn't play in that game and Kelly wasn't physical enough to keep Al away from the basket. Hopefully, in this game, Sully can contain Big Al and also make Al work on the defensive end as well.

Take Care of the Ball- During the Celtics win streak, they averaged under 14 turnovers a game. In their win over the Hawks, they turned it over 17 times. In the losses, they have turned it over 20 or more times, especially in the second half of games. They have to focus on their passes and be aware of the defenders at all times and take better care of the ball.

Run and Set the Pace - The Celtics must run every time down. They can't walk the ball up and settle for a half court game. When they run, they get easy baskets before the defense sets up. They have to do that on every play.

Rebound - The Celtics can't run and they can't score if they don't have the ball. They must crash the boards as a team and put out the extra effort it takes to get the rebounds.

Get into the Paint - The Celtics must go to the hoop and get into the paint instead of settling for long jumpers. Good things happen when they go to the basket.

The Celtics are bound to be tired, playing in their 5th game in 7 nights. They have to keep their focus on getting the win. Their focus must win out over their fatigue.

Ken Mauer has officiated 1,603 regular season, 137 playoff, and 12 Finals games during his 27-season career. He was also a member of the crew that officiated the 1993 Europe Tour in London and the 2005 All-Star Game in Denver. Mauer’s resume includes six years of CBA officiating experience, nine years of collegiate officiating experience and 12 years of high school officiating experience in Minnesota. After spending most of his life in Minnesota, Mauer has settled in Ft. Myers, Fla. where he can still watch his cousin, Joe Mauer, with the Twins in spring training. Mauer was a three sport athlete in college at Minnesota where, in 1977, he recieved All Big 10 baseball honors. Mauer regularly supports the Salvation Army, as well as other organizations. He is often a guest speaker at basketball camps and clinics, church groups and officiating groups.

Mauer is very quick to call technicals and in one game, once ejected Doc Rivers less than 3 minutes into a game, and that was before the new "Respect the Game" rules. In a recent Timberwolves game he might have set the record by calling 5 technicals in a 10 second span. The Celtics have to be on their best behavior with Mauer calling the game.

The Celtics are 0-1 this season and 2-8 in their last 10 games with Mauer officiating. This season, Mauer called the loss to the Pistons in which the Celtics shot 12 free throws to 29 for the Pistons and the officiating seemed to favor the Pistons the entire game. In the 2012 ECF Game 2 vs the Heat, the Heat shot 47 free throws to 29 for the Celtics. He failed to call a foul on Wade for hitting Rondo in the head on a layup even though he was in position to see it clearly. He also failed to call a foul on Wade for kicking KG who was going up for a layup when he was again the ref in position to do so. He called a questionable clear path foul on Pietrus. Pierce fouled out on a very questionable call, joining Pietrus and Dooling with 6 fouls. LeBron James took 24 free throws himself. In a loss last season in OT the Bucks shot 36 free throws to 20 for the Celtics. They refused to call an intentional foul at the end to stop the clock. They also ignored an elbow by Ilyasova to Green's head that left him on the floor and injured, even through Mauer was right there and saw the play.

Another loss was to New Orleans where the Hornets shot 31 free throws to 16 for the Celtics and the officiating wasn't bad in spite of the free throw disparity. A third loss was to the Hawks who shot 36 free throws to 20 for the Celtics and the officiating was terrible and biased toward the Hawks the entire game, especially in OT. In a win last season vs the Raptors, the Celtics shot 35 free throws to 19 for the Raptors and the calls seemed to favor the Celtics. In 3 other games with Mauer last season, they let them play and the officiating was even. It's hard to tell which Mauer will show up, the one that lets them play and is fair or the one that tries to micromanage the game and make it about himself. The Bobcats are 1-9 in the last 10 games with Mauer. He is a veteran official that isn't usually swayed by the home crowd. His home W/L record this season is 3-6.

Marat Kogut enters his fifth year as an NBA Referee having officiated 208 games. Kogut immigrated to the United States with his family seven days after he was born. Raised in Brooklyn, NY, he started officiating at the age of 16 at local recreational youth leagues. His professional experience includes three years in the WNBA, as well as 4 years in the NBA Development League, where he officiated over 180 games, including the Finals in his last two seasons and the 2009 D-League All-Star Game in Phoenix. Prior to joining the NBA officiating staff, Kogut worked in several Men's NCAA mid-major Division I conferences, including the Ohio Valley Conference, Atlantic Sun, and Big South Conference, as well as in New York metro area High School basketball for four years. Kogut was the Head Men's Basketball Manager for the St. John's Redstorm.

Leon Wood’s connection with the NBA began as a player when he played professionally with Philadelphia, Washington, New Jersey, San Antonio, Atlanta and Sacramento, averaging 6.4 points, 3.2 assists and 1.2 rebounds as a guard during his six-year NBA career. In addition to his NBA playing career, Wood was a member of the Gold Medal winning 1984 United States Olympic Basketball Team, and he won another Gold Medal in the 1983 Pan-Am Games.

During his 17-season NBA officiating career, he has worked 1,052 regular season games and 20 playoff games. Wood has three years of CBA officiating experience and one year of collegiate officiating experience in the Ohio Valley and Trans America Athletic Conferences. He also has one year of high school officiating experience in California. Wood played for the University of Arizona for one season before transferring to Cal State Fullerton, where he was named All-American. The native of Santa Monica, Calif. is an inductee into the Orange County Hall of Fame, and in 1998, Wood was inducted into the Cal State Fullerton Hall of Fame. Wood was a member of the basketball team at St. Monica High School.