The Celtics will have their work cut out for them as they face the big front line of the Pistons.

Share All sharing options for: Celtics visit the Detroit Pistons still looking for their first win

This is the first of 4 meetings with the Pistons this season. The undersized Celtics will have their work cut out for them against the front line of the Pistons that includes 6'9" Josh Smith, 6'11" Greg Monroe, and 7' Andre Drummond.

The Pistons are on the verge of being contenders and are 1-1 on the season. They opened the season at home with a win over the Wizards and then lost to the Grizzlies on the road. The Celtics, in the meantime, are still looking for their first win of the season.

The Celtics have started the same lineup in their first two games and they have started off both games fairly strong. It may be a good idea to stick with the same starting lineup for awhile to give the team some continuity but Coach Stevens has said that he might change the starters from game to game.

Vitor Faverani has been a bright spot in the Celtics first two games and, especially against the big front line of the Pistons, he should get the start again. Beyond that, any of the pieces may be interchangeable. So, your guess is as good as mine as to who starts.

As Brad Stevens and his new team are looking of their first victory tonight, the CLNS/CelticsBlog crew will have all of your game coverage handled. Your broadcast crew is Sean Bakke and Brian Langford. Nick Gelso will be stationed in the chatroom at CelticsBlog and manning the CLNS Radio social media outlets. As always, we will be taking your calls throughout the entire broadcast. 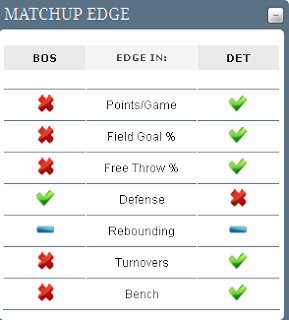 This is the one position where the Celtics have an advantage if Stevens sticks with the same lineup. 6'9" Jeff Green should have an advantage over 6'3" Chauncey Billups in size, speed and athleticism. Hopefully the good Jeff shows up for this one.

Run, Run, Run - The Celtics showed that when they run and move the ball up the court quickly, they do some good things. They can't lapse into walking the ball up, playing half court and depending on iso's for scoring.

Focus and Effort- The Celtics must bring their focus and do the little things that help to win games. They missed 12 free throws in the loss to the Bucks and that shouldn't happen. They need to continue to play hard and put out the effort on the boards and on defense as well.

Move the Ball - The Celtics moved the ball in the first half on Friday but in the second half, the ball movement would stop and players tried to do too much.

Teamwork - Hopefully the Celtics won't split into factions and point fingers at each other over the 2 losses so far. They need to pull together and play as a team on both ends of the court. Chemistry and teamwork are very important and as a young team, they need to work at building both.

X-Factors
On the Road, focus, and Officiating

After losing 2 in a row, the Celtics need to focus on getting a win in this game in hostile territory. The officiating possibly had something to do with the Celtics' young players losing focus against the Bucks when they started falling for Pachulia's flops. They can't let a couple of bad calls or the hostile atmosphere in the arena take away their focus if they want to stay in this game.

Ken Mauer has officiated 1,603 regular season, 137 playoff, and 12 Finals games during his 27-season career. He was also a member of the crew that officiated the 1993 Europe Tour in London and the 2005 All-Star Game in Denver. Mauer’s resume includes six years of CBA officiating experience, nine years of collegiate officiating experience and 12 years of high school officiating experience in Minnesota. After spending most of his life in Minnesota, Mauer has settled in Ft. Myers, Fla. where he can still watch his cousin, Joe Mauer, with the Twins in spring training. Mauer was a three sport athlete in college at Minnesota where, in 1977, he recieved All Big 10 baseball honors. Mauer regularly supports the Salvation Army, as well as other organizations. He is often a guest speaker at basketball camps and clinics, church groups and officiating groups.

Mauer is very quick to call technicals and in one game, once ejected Doc Rivers less than 3 minutes into a game, and that was before the new "Respect the Game" rules. In a recent Timberwolves game he might have set the record by calling 5 technicals in a 10 second span. The Celtics have to be on their best behavior with Mauer calling the game.

The Celtics are 3-7 in their last 10 games with Mauer officiating. In the 2012 ECF Game 2 vs the Heat, the Heat shot 47 free throws to 29 for the Celtics. He failed to call a foul on Wade for hitting Rondo in the head on a layup even though he was in position to see it clearly. He also failed to call a foul on Wade for kicking KG who was going up for a layup when he was again the ref in position to do so. He called a questionable clear path foul on Pietrus. Pierce fouled out on a very questionable call, joining Pietrus and Dooling with 6 fouls. LeBron James took 24 free throws himself. In a loss last season in OT the Bucks shot 36 free throws to 20 for the Celtics. They refused to call an intentional foul at the end to stop the clock. They also ignored an elbow by Ilyasova to Green's head that left him on the floor and injured, even through Mauer was right there and saw the play.

Another loss was to New Orleans where the Hornets shot 31 free throws to 16 for the Celtics and the officiating wasn't bad in spite of the free throw disparity. A third loss was to the Hawks who shot 36 free throws to 20 for the Celtics and the officiating was terrible and biased toward the Hawks the entire game, especially in OT. In a win last season vs the Raptors, the Celtics shot 35 free throws to 19 for the Raptors and the calls seemed to favor the Celtics. In 3 other games with Mauer last season, they let them play and the officiating was even. It's hard to tell which Mauer will show up, the one that lets them play and is fair or the one that tried to micromanage the game and make it about himself. The Pistons are 3-7 in the last 10 games with Mauer. He is a veteran official that isn't usually swayed by the home crowd. His home W/L record this season is 1-0.

Entering the 2013-14 NBA season, Bavetta has officiated 2,585 consecutive regular season games and 270 Playoff games, including 27 Finals games, never having missed an assigned game throughout his entire career. He was a member of the officiating crew that worked the 1989, 1995 and 2006 NBA All-Star Games, 1997 McDonald’s Championship in Paris, 1993 Mexico Challenge, 1992 Summer Olympics in Barcelona and 1990 Japan Games in Tokyo.

Prior to joining the NBA, Bavetta was an official with the Eastern League (CBA) for nine years, and he has also officiated in the Rucker League, FIBA, Jersey Shore Basketball League, as well as both the Public and Catholic High School leagues in New York City. Bavetta attended St. Francis College in Brooklyn. He is a member of the New York City Catholic High School Hall of Fame. He added to his personal honors when he received the National Pro- Am Lifetime Achievement Award and also was inducted into the New York City Basketball Hall of Fame.

He was left off the playoff roster the three seasons and there were rumors of a forced retirement but here he is back again for another season. There are rumors that in his off time, Bavetta doubles as the Crypt Keeper. The Celtics are 6-4 in their last 10 games with Bavetta on the court. One win last season was in OT over the Magic in which the teams were allowed to play and both teams took 19 free throws. Another win was a 92-79 win over Philly where the Sixers took 16 free throws to 12 for the Celtics and the refs again let them play. In a 3rd game last season against the Knicks, Bavetta was terrible. Twice Tony Brothers made a call from across the court when Bavetta was right next to the play and didn't call it. In that game, the Celtics had Tony Brothers as head ref to help even out the Bavetta effect but in this one, I wouldn't count on Ken Mauer to do the same. The Pistons are 6-4 in their last 10 games with Bavetta. This is Bavetta's first game this season.

Corbin, a Baltimore native, has been involved in charitable efforts in the city, including working for healthcare for the homeless. His athletic accomplishments still remain notable in the Baltimore community, where he played baseball and basketball at Coppin State College and Towson Catholic High School.