Celtics host Jazz in a battle of the 0-4 teams

Because the NBA doesn't allow ties, one of these two teams will record their first win of the season tonight.

Share All sharing options for: Celtics host Jazz in a battle of the 0-4 teams


The Celtics and Jazz clash in a battle of two 0-4 teams. The Jazz come into this game after being blown out the night before by the Nets in the first of a 4 game road trip. They will continue their trip through Chicago and Toronto after this game. The Jazz are also short handed with 5 players on the injured list. If ever there was a game that the Celtics should win, it is this one.

The Jazz are 36-50 all time vs the Celtics and 11-32 all time on the road. They have lost 5 straight games to the Celtics. No current players on the Jazz were on the last team that beat the Celtics on March 22, 2010.

The Celtics are still looking for their first win and hoping to avoid becoming the first Celtics team since their first season in 1946 to open the season 0-5. To do that, they are going to have to find a way to close out the game by avoiding turnovers and finding someone who can hit a shot late in the game.

Gerald Wallace left Monday's game with a bruised knee. He is listed as day to day and should he not be able to play, I'm not sure who Stevens will start in his place. Stevens may possibly start Jordan Crawford at the point and move Bradley to the 2 as that seemed to work in the preseason.


Be sure to tune into the CLNS Post Game Show after the game. Your broadcast crew is Daniel Baker and Nick Gelso. Brandon Paul (B-Paul) will be stationed in the chatroom at CelticsBlog and manning the CLNS Radio social media outlets. As always, we will be taking your calls throughout the entire broadcast. 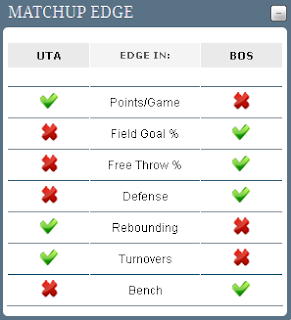 Gerald Wallace's status is uncertain for this game, but this is a game where the Celtics would need his size at the shooting guard spot to match up with Hayward. His defense is also needed on Hayward, who is averaging 15 points and 6.3 rebounds per game.

Kanter has been playing very well for the Jazz, averaging 17.8 points and 9.5 rebounds. He scored a season high 21 points against the Nets last night. Vitor, who is averaging 9.5 points and 7.3 rebounds, will need to play tough defense to keep Kanter from going off.

The big question in this matchup is whether Jeff Green will have two good games in a row or fall back into the pattern of one aggressive game, two invisible games. Richard Jefferson has lost a step over the years but he is still averaging 11.7 points and the Celtics will need to pay attention to him.

Run, Run, Run - The Celtics have to run. They have the youth and the depth to run every time down the floor but for some reason they walk the ball up part of the time. They need to get the ball up the court before the defenses can get set.

Rebound - The Celtics have been doing better on the boards since that first game, but they need to put out the effort every game to grab rebounds, especially on the offensive end.

Take Care of the Ball - The Celtics are still turning the ball over too much. They have to take better care of the ball, make smart passes, and limit their turnovers.

Play 48 Minutes - The Celtics have been playing very well for 46 minutes and then in the last two minutes they seem to fall apart. They must find a way to close out the game and execute in the final couple minutes of the game.

The Celtics are playing at home and hopefully the home crowd will give them a boost in this game. Also, the Jazz are on a road trip and playing in the second of back to back games so fatigue may set in to give the Celtics an edge.

Derek Richardson
Derek Richardson has officiated 943 regular season games and one
playoff game, as well as the 2003 NBA Rookie Game in Atlanta,
during his 16 seasons as an NBA official. Prior to joining the NBA, Richardson spent eight years
officiating in the CBA, including the 1996 CBA All-Star game and two games of the 1996 CBA
Finals.
Richardson played basketball at Los Angeles Southwest College and earned an Associate of Arts
degree in Criminal Justice. He went on to earn a degree in Administration of Justice from Los
Angeles Dominguez Hills.
Richardson has volunteered with the South Central Los Angeles YMCA, assisting with youth
basketball programs.

Kevin Scott
Kevin Scott enters his third NBA season having officiated 86 regular
season games. Scott’s experience includes four seasons and
138 games officiated in the NBA D-League where he officiated the playoffs in 2009, 2010, 2011
and was selected to work the NBA D-League Finals in 2011.
Scott’s collegiate experience includes four years in the Southeastern Conference, 10 years in the
Atlantic Sun Conference, six years in the Southern Conference, and seven years in the Big South
Conference. He was also one of the replacement officials during the referee lockout in 2009. He may be remembered for ejecting Bobcats'coach Larry Brown from an exhibition game that season and then calling security to escort him from the court when he didn't leave quickly enough for Scott. Brown was fined $60,000 for verbally abusing Scott.