With two first-round draft picks in the absolutely stacked 2014 NBA Draft, Boston Celtics fans should be excited to watch NCAA basketball this season. There are a number of talented players projected to be in the draft, so I will be publishing a monthly college basketball guide for fans of the Celtics. Each edition of this series will highlight premiere matchups to watch, as well as players to keep an eye on.

At this point in the year it's impossible to predict what specific team needs the Celtics will have heading into the offseason, so it's best to take just a general look at what we can expect in the draft next year. Not to mention that many of these young college players could surprise or disappoint us. So much can change in so little time because nothing is concrete.

So, for the November edition of "A College Basketball Guide for Boston Celtics Fans," I will briefly overview what to watch for this month. The NCAA season gets started on Friday night, so here are ten players to follow this month:

If the Celtics "win" the lottery:

Andrew Wiggins is a freakish athlete with a skill-set similar to a young Tracy McGrady, and college will allow him to polish his game. He has already found more consistency with his perimeter jump shot, but it will be interesting to see him develop his half-court passing skills. The 18-year-old has all the tools it takes to be a stud defensively, but he must put forth the effort on a steady basis. Only Wiggins can prevent himself from being the number one pick in the 2014 Draft.

Randle is one of my personal favorites because of his unique set of skills. At 6-foot-9 and 245-pounds, he doesn't look like the type of player that can drain three-pointers with a silky smooth delivery, but he can; and he'll also surprise you with his ability to drive to the rim to score or pass. At only 18-years-old, Randle has the necessary tools to someday be a great player, but this season he must mature his fundamentals in order to complete his game.

At only 18-years-old, Parker appears to have scoring instincts beyond his years. He is a dynamic player that will score from the perimeter or at the rim. Parker's in the process of developing his post game, which could drastically improve his draft stock as a tweener-forward. The issue with Parker is that he is not as athletic as some of the other top players, so it's important to see if he can compete against top players and teams in the NCAA.

Joel Embiid is the rawest prospect expected to go in the top 10, but he could be the star center an NBA team could be looking for. With a 7-foot-5 wingspan, Embiid has the potential to be an excellent defensive player. The issue is he only began playing basketball in 2011, so he is still learning the game as he cultivates his fundamentals.

If Rondo gets traded:

At 6-foot-4, Smart is a combo-guard at the college level, but he projects to be a point guard in the NBA. The sophomore guard will need to improve his decision-making and extend his scoring towards the perimeter. Right now he scores at will by driving to the rim, but he must demonstrate that he can hit a jumper consistently. On the other hand, Smart has already shown himself to be a true leader, which is important for a starting point guard in the NBA.

Harrison is currently hampered by a minor knee injury, but should be an impact player once he returns to the court for Kentucky. With a 6-foot-8 wingspan, Harrison's size alone could make him a great defender. It also helps him offensively, since he was is able to get to the basket with brute force. Keep an eye on Harrison's ability to run the point and distribute the ball to his teammates to see if he is a true point guard or a combo-guard.

If the Celtics land in the middle:

The native of Boston, Massachusetts will play second fiddle to Andrew Wiggins this year, but Wayne Selden is an extremely talented player himself. Selden will bring energy to the court every night with a "will not lose" attitude. More technically, the 6-foot-6 shooting guard is a strong finisher at the rim, though he also has a silky smooth jumper. Don't be surprised if Selden turns into a sleeper in the 2014 draft.

Harris will make it in the NBA because of his potential as a lockdown defender. With a tenacious attitude, quick feet, and high instincts, he deserves to be a first round pick for those reasons alone. Even though Harris will probably not be an impact player offensively, he still contributes with spot-up jumpers and his admirable slashing ability.

If the Celts keep Brooklyn's pick:

Now entering his junior year, James McAdoo was once projected as a top-five selection. However, he has yet to come close to reaching his potential, and may have been overrated in the first place. McAdoo is another "jack of all trades, but master of none" player, so it's important that he takes at least one ability to the next level this season.

Grant is undeveloped on the offensive end, but could become an effective defensive player this season with Syracuse. After playing only 14 minutes per game this past year, Grant should seen an uptick in time on the court, so I look forward to seeing if he has come any closer to reaching his potential. With an enormous 7-foot-3 wingspan, I expect Grant to at least make some strides defensively.

Since watching Boston Celtics games is the priority, it can be difficult to catch college basketball games. If a date has an asterisk (*) next to it, that means there is a scheduling conflict with the Celtics that night; but hopefully you have DVR, so you can record these games and watch them when you please. Here are the top five games that I suggest watching this month:

On Michigan St., watch senior power forward Adreian Payne, as he'll match up against projected lottery picks Julius Randle and Willie Cauley-Stein. Randle is one of my favorite players in the 2014 draft, so I look forward to seeing him match up against an experienced player in Payne. Also on Kentucky are potential lottery selections, guards James Young and Andrew Harrison. They'll face off against a relentless defender in Gary Harris.

All eyes will be on this matchup because it features four potential top-ten picks, including Jabari Parker of Duke, and Andrew Wiggins of Kansas. As those two forwards battle, be sure to keep an eye on Kansas shooting guard Wayne Selden, as well as center Joel Embiid. Both of those players could go in the top-ten, especially Embiid, who's stock is quickly rising as the season nears.

Junior power forward James McAdoo was once thought of as one of the brightest young players in college basketball, but his star has dimmed over the years. Entering his junior year with North Carolina, he is now projected to be a mid-to-late first round pick. Even though the opponent is weak, this is a game for McAdoo to show he can dominate an inferior opponent when he should. 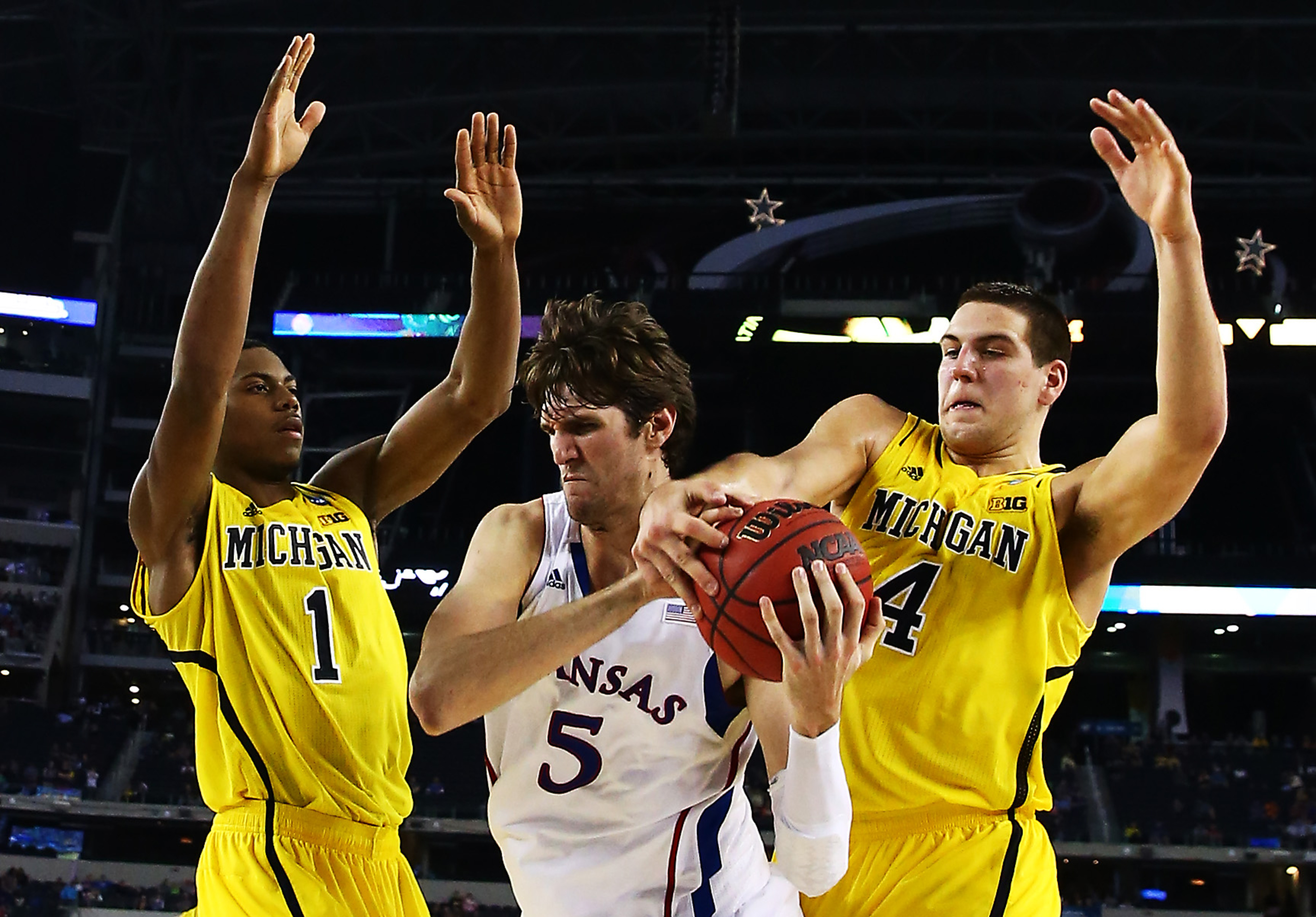 Fortunately for Michigan, both of their talented freshmen from last year decided to return for their sophomore seasons. Power forward Mitch McGary and wing Glenn Robinson III will look to step their games up this year after terrific freshman seasons. Look for "GR3" to develop his game by improving as a perimeter shooter with the ability to create his own offense. For McGary, he needs to improve as a scorer, as he is primarily limited to hustle scores or offensive rebound put backs.

I was surprised when Marcus Smart decided to return to Oklahoma State for his sophomore year, but the combo-guard will have another year to develop as a true point guard. He'll receive his greatest test of the month when he faces off against Memphis' Joe Jackson, a guard projected to go in the second round of the draft.

I hope this guide is helpful and enhances your excitement for the 2013-2014 NCAA basketball season! Be on the look out for the next edition on December 1st.