With two first-round draft picks in the absolutely stacked 2014 NBA Draft, Boston Celtics fans should be excited to watch NCAA basketball this season. There are a number of talented players projected to be in the draft, so I will be publishing a monthly college basketball guide for fans of the Celtics. Each edition of this series will highlight premiere matchups to watch, as well as players to keep an eye on.

In November, I highlighted ten players to track, as well as five must-watch games. The majority of the players to watch this month are the same, but there are plenty more games to tune into or set your DVR to record.

Here are ten games to watch this month, as well as commentary on each player, for the December edition of "A College Basketball Guide for Boston Celtics Fans."

If a date has an asterisk (*) next to it, that means there is a scheduling conflict with the Celtics that night, so utilize your DVR if you have one.

Oklahoma State point guard Marcus Smart dominated in November, averaging 21.7 points, 4.6 rebounds, and 3.6 assists per game. Last month I previewed this same matchup, and Smart ended up making Memphis point guard Joe Jackson look silly. Smart, a combo-guard at the college level, is beginning to make the necessary advances in his game that make me believe that he can be a point guard in the NBA. Don't count him out as the potential number one pick, and if Rajon Rondo is truly on the chopping block, he should be high on Danny Ainge's radar. 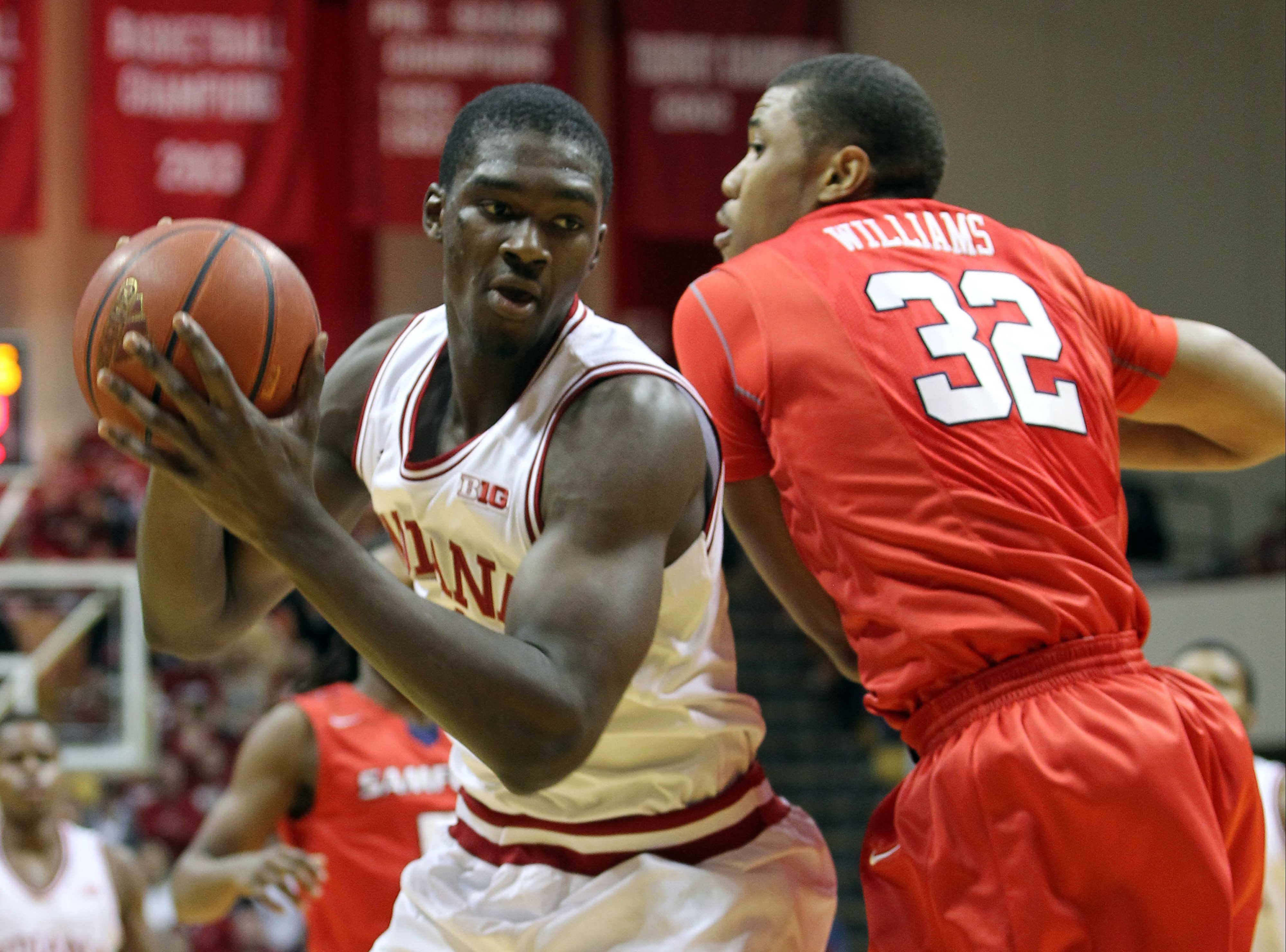 Indiana's freshman power forward Noah Vonleh is probably the most overlooked player in this year's freshman class despite averaging an impressive double double this season. Vonleh is a native of Haverhill, MA, and has sprouted out to 6-foot-10 this year. An athletic but raw player, Vonleh will get his greatest test of this early season against Syracuse. Sophomore forward Jerami Grant has burst onto the scene this year, taking much of the stardom away from senior C.J. Fair. Grant is an extremely athletic player with elite potential on the defensive end of the floor. It's unlikely that freshman Tyler Ennis enters the 2014 Draft, but he is a talented point guard worth keeping an eye on anyway.

Forward Jabari Parker is even better than I thought he would be. The 6'8" freshman has made the game look easy, averaging 23 points, 8 rebounds, 2 assists, and 1.8 blocks per game. The game just seems to move slowly for Parker, as he seems to always make the right play at the right time. With the ability to score the ball anyway he wants to, Parker is able to score at an efficient rate. With admirable performances against Kansas and Arizona, Parker will get his next test against Michigan. Sophomore forward Glenn Robinson III is a more athletic, but less talented forward than Parker. Both Mitch McGary and Rodney Hood have showcased their talents this season, and look like potential mid-round selections in the upcoming draft.

Last month I said that forward James McAdoo has to prove that he has stepped up his game from the past two seasons. Unfortunately for him, he hasn't at all. In fact, he was dominated by Louisville this past weekend. McAdoo is a solid all-around player since he scores and defends well, but he doesn't do anything that jumps off the page. On the other hand, Michigan State shooting guard Gary Harris and power forward Adreian Payne are on a tear this season. They have led the Spartans to the number one rank in the entire nation, as they look to remain undefeated this month. Harris could be an All-NBA defender, but he is also a timely scorer that slashes well, and can shoot from the outside. Payne has potential to be a role player extraordinaire. Look for him on the post, though he has a sweet stroke from the perimeter.

Is Kentucky's entire roster on this list? Well, yeah, basically, but it's for good reason. Last month I said that forward Julius Randle must improve his fundamentals in order to be the number one pick, and he has certainly made strides towards doing that. The 6-foot-9 freshman obviously has unbelievable skills when it comes to scoring and rebounding, but he has defended much better than I expected him to. If he's matched up with Baylor big man Isaiah Austin, it will be a good test for him. At 7-foot-1, Austin spends the majority of his time on the perimeter, though he is attempting far less three-pointers this season. Personally, I am not a fan of Austin, as he tends to disappear during the game, but it is still a matchup worth watching.

I honestly don't know what to make of the freshman phenom, Andrew Wiggins. The 18-year-old forward has proven that he is extremely athletically, with some high-flying dunks, and impressive defensive plays, but he is far too passive to my liking. It's almost like Wiggins lacks a killer-instinct, as I have never seen him demand the ball in crucial situations this season. On the other hand, freshman center Joel Embiid is far more developed than I had expected. In under 18-minutes per game, Embiid is averaging 9.1 points, 7 rebounds, and 2.3 blocks per game. His instincts are off the charts despite only playing organized basketball since the age of 16. By the end of the year could Embiid surpass Wiggins and be in the discussion for the number one pick? It wouldn't surprise me one bit.

I wasn't incredibly high on freshman power forward Aaron Gordon before this season. He's a freak-of-nature athletically, but, to my eye, he lacked pure basketball skills. Even though he's only averaging 12.1 points, 9.3 rebounds, and 1.6 assists per game; he's growing on me. Gordon is more dynamic than I expected on the offensive end, and he even has had some nifty assists in transition. He's young, but appears to be a cerebral player; his game isn't entirely based on athleticism like I thought. However, he's still so thin, and might have a hard time bodying the big sophomore center Mitch McGary, if he gets matched up with him.

Both of these teams have briefly been outlined already, but Kentucky deserves to be watched multiple times for all their talent. Against the struggling McAdoo, look for forward James Young to establish himself as legitimate first round picks. Young struggled in November, shooting 35.9 percent from the field, and he only seemed to accumulate points when he shot in high volumes. I want him to prove that he can be a more efficient scorer, though his athleticism alone makes him an intriguing talent. The Harrison twins have proven to be a formidable backcourt, though neither of them look entirely ready for the NBA just yet.

Do you think the defending national champion Louisville Cardinals are done? No, not quite. They are led by senior point guard Russ Smith and sophomore forward Montrezl Harrell. Smith has escalated his game, averaging 18.9 points per game on 46.1 percent shooting. While he will most likely not be a first round pick, his skill-set will work as a good barometer to read how effective Kentucky is defensively. As I said before, the Harrison twins have played well this year, though they haven't been exceptional. More interestingly, I want to see how centers Willie Cauley-Stein and Dakari Johnson defend inside. They will have their hands full with Montrezl Harrell, who is averaging 12.3 points on 59.3 percent shooting, but how will they handle Smith if he gets to the paint? Keep an eye on their defense, which is arguably the most important attribute in a young big man.

Leap into the New Year by watching Mr. Fundamentals, Doug McDermott. The 6-foot-8 senior forward won't be a star in the NBA, but the team that drafts him in the mid-to-late first round will have a player who makes an impact offensively whenever he's in the game. McDermott is a knockdown shooter from both mid-range and behind the arc. With perfect fundamentals, McDermott will immediately be an effective role player in the NBA. But Marquette's Davante Gardner presents an interesting matchup, since he has NBA-like size and strength. Look to see if McDermott can establish anything driving to the basket, because I have my doubts. More importantly, how will he defend the hefty Gardner? Even though Marquette lacks top-end talent, this game could give us a glimpse at McDermott's upside at the next level.

I hope this guide is helpful and enhances your excitement for the 2013-2014 NCAA basketball season! Be on the look out for the next edition on January 1st.