The Celtics head to Brooklyn for their first regular season meeting with the Nets since the blockbuster trade that exchanged Paul Pierce, Kevin Garnett, and Jason Terry for Kris Humphries, Gerald Wallace, and Keith Bogans.

CLNS Post Game ShowCall into show: 347-215-7771
Players on both sides are saying that this is just another game, but it's far from it. For one thing, it's a division rivalry. For another, it is the first of 4 meetings between two teams that made a blockbuster trade this summer. Players on both sides would love to beat the team that traded them this summer to show that their former teams should have kept them.

The starting lineup in the Nets notes has Shaun Livingston starting at the point and Alan Anderson playing at small forward. However, there have been reports that both Paul Pierce and Deron Williams are expected to return from injury in this game. Jason Kidd may bring them off the bench or put them right back in the starting lineup.

Paul Pierce broke a bone in his hand just 10 days ago and was expected to miss this game, but he was back at practice on Monday and said he expects to play in this one. His early return shouldn't come as any surprise to Celtics fans who have seen the former Celtic play through injuries over and over throughout the years.

Deron Williams has missed the whole season so far with an ankle injury. He has also been practicing and expects to make his return in this game. On the Celtics side, Kelly Olynyk has been sidelined with a sprained ankle since November 23 and practiced on Monday for the first time since the injury. He is listed as a game time decision.

The Nets last played on Saturday when they were able to get past the last place Bucks 90-82. The Celtics played a matinee game on Sunday, annihilating the Knicks by 41 points. The Celtics also are playing in the first of back to back games with the Clippers waiting in the wings for a Wednesday game. Whether they admit it or not, this game is special.

Don't forget to check out the chatroom during the game and be sure to tune into the CLNS Post Game Show right after the game. Your broadcast crew is Brandon Paul (B-Paul) and Matthew Fahey. Nick Gelso will also be stationed in the chatroom at CelticsBlog and manning the CLNS Radio social media outlets. As always, they will be taking your calls throughout the entire broadcast.

Andre Kirilenko (back) out 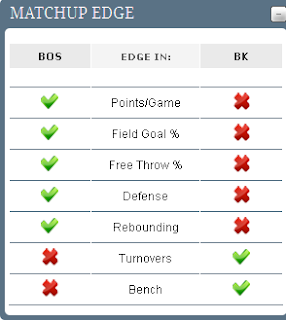 Brook Lopez is one of the top centers in the league and is going to be a tough cover for Jared Sullinger. Lopez is averaging 20.6 points, 6.2 rebounds, and 2.2 blocks per game.

Brandon Bass learned a lot while playing along side Kevin Garnett and now the student must stop the master. This should be a good matchup.

Joe Johnson is capable of putting up big numbers if not checked. He will have a size advantage over Avery Bradley, but Avery is going to have to keep him from getting open looks and easy shots. Johnson can also shoot his team out of the game when his shot isn't going down and it will be up to Avery to keep that shot from hitting its mark.

Defense - The Celtics have been winning with defense and they need to continue to play tough team and individual defense in order to win this game.

Run- The Celtics play best when they set the pace and run on every possession. They can get easy shots when they beat the defenses down the court.

Rebound- The Celtics have been doing a good job of crashing the boards as a team and they need to continue to do so. When they rebound as a team, including the guards, it gives them a much better chance of winning.

Move the Ball - The Celtics play best when they move the ball and find the open man. When they dribble too much and stall the ball movement, they struggle.

Go to the Hoop - The Celtics have been shooting the ball well, but they shouldn't fall too much in love with the long jumpers. When they take the ball inside, good things happen. They either get an easy basket, draw a foul or have an open man to pass out to.

Emotions will be running high on both sides and the team that can keep their focus and control their emotions the best will more than likely get the win.

Bennett Salvatore has been an official in the NBA for the past 31 seasons, and has worked 1,719 regular season and 228 playoff games, including 25 NBA Finals games. The veteran official has also worked the 1993 and 2002 NBA All-Star Games, the 1993 McDonald’s Championship in Munich, Germany, and the 1997 Mexico Challenge. Prior to joining the NBA, Salvatore spent two years officiating in the CBA, and also has 10 years officiating high school. Salvatore missed the entire 2011-12 season with an injury.

Another of Salvatore's "butchered" calls was in the 2008 conference finals when he waved off a contested 3-pointer that Paul Pierce had hoisted over Richard Hamilton, inducing Hamilton to leave his feet with a ball fake and land on Pierce's back. Pierce, however, was charged with an offensive foul for creating the contact with Hamilton. It was a terrible call. The thing with Salvatore is you never know what you will get. He can be good but he can also be very, very bad. Here is a little taste of Salvatore at work:

Over the past 13 seasons, Courtney Kirkland has officiated 786 regular season games and six playoff games. He also officiated two seasons in the WNBA, including the 2000 WNBA Finals and the 1999 Conference Finals. Kirkland also officiated the 2010 and 2011 Venezuelan LPB basketball championships. Prior to joining the NBA, Kirkland also worked three seasons in the CBA where he officiated the 1999 and 2000 CBA Finals as well as the 2000 CBA All-Star Game. He was a high school official for four years as a member of the Baton Rouge (La.) Basketball Officials Association and was named Rookie Official of the Year in 1994.

Kirkland earned a degree in Computer Science from Southern University. He was a member of the Northwestern High School basketball team that made it to the state semifinals in 1991 and 1992. Kirkland received the school’s Academic award, and led the team in assists, free throw and three-point shooting percentage. Off the court, Kirkland created the Kennedy Leigh Kirkland Memorial Scholarship Fund in 2005 in memory of his daughter, who passed away at the young age of 6 weeks. The Scholarship Fund was created to provide educational assistance to siblings of children who have passed away.

Kirkland earned some measure of notoriety when he jumped in to block a Kris Humphries free throw in a Nets game last season. The Celtics are 0-2 this season and 6-4 in their last 10 games that Kirkland officiated. He called the loss to the Raptors in the preseason in which the Celtics took 19 free throws to 26 for Toronto. He also called a loss at Charlotte where the Bobcats took 30 free throws to 25 for the Celtics. The officiating wasn't bad in either game. The first two games he called last season were evenly officiated with no calls standing out either way. The 3rd game last season was against the Pacers in which the Celtics shot 18 free throws to 28 for the Pacers. They called a flagrant 2 on KG which was later downgraded and the officiating was terrible. The officiating in his last two games last season was again good. The Nets are 4-6 in their last 10 games with Kirkland. His home W/L record this season is 11-6.

Kevin Scott enters his third NBA season having officiated 86 regular season games. Scott’s experience includes four seasons and 138 games officiated in the NBA D-League where he officiated the playoffs in 2009, 2010, 2011 and was selected to work the NBA D-League Finals in 2011. Scott’s collegiate experience includes four years in the Southeastern Conference, 10 years in the Atlantic Sun Conference, six years in the Southern Conference, and seven years in the Big South Conference. He was also one of the replacement officials during the referee lockout in 2009. He may be remembered for ejecting Bobcats'coach Larry Brown from an exhibition game that season and then calling security to escort him from the court when he didn't leave quickly enough for Scott. Brown was fined $60,000 for verbally abusing Scott.

This season he called the win over the Jazz where Utah took 18 free throws and the Celtics took 14. Again, the refs let them play and the officiating was good. The Nets are 4-4 with Scott over his career. His home W/L record this season is 10-7.