The Celtics continue their Reunion Week with Doc Rivers' only visit to the Garden with his Los Angeles Clippers.

Share All sharing options for: Reunion week part 2 - Doc Rivers returns to the Garden with his Clippers in tow

The Celtics continue their Reunion Week with Doc Rivers' only visit to the Garden with his Los Angeles Clippers. The Celtics are coming off a loss to Paul Pierce, Kevin Garnett and the Brooklyn Nets and would love to get back on track against their former coach.

The Clippers have been hit with several injuries and have signed Stephen Jackson to try to fill in the holes left by the injuries to Matt Barnes and JJ Redick. He is expected to join the team in Boston. He may or may not see playing time in this game.

Doc Rivers has recently called out his team in the media for sulking and not playing hard. It will be interesting to see how they respond to that in this game.

The Clippers are looking for their second straight win while the Celtics are looking to get back on track after the loss to the Nets. They will play 6 of their next 7 games at home and this game begins a 5 game home stand.


As always, check out the CelticsBlog Chat Room during the game and don't forget to tune into the CLNS Radio Post Game Show right after the game. Your broadcast crew is Nick Gelso and Calvin Chamberlain. Daniel Baker will also be stationed in the chatroom at CelticsBlog and manning the CLNS Radio social media outlets. As always, they will be taking your calls throughout the entire broadcast. 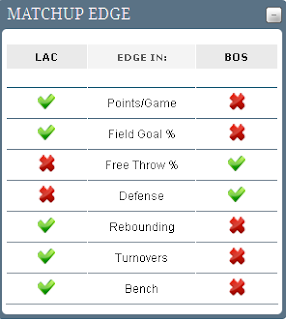 Chris Paul is the leader of the Clippers and is averaging 18.4 points, 4.9 rebounds, 12.0 assists and 2.4 steals. We will probably see Avery Bradley on Paul for much of the game as slowing him down is crucial for the Celtics.

Honorable Mention
Brad Stevens vs Doc Rivers
Since this game is all about the return of Doc Rivers to the Garden, it will be interesting to see how the new coach does against the old coach.

Keys to the Game
Defense - The Celtics must continue to make team defense a priority. The Clippers are 5th in the league in scoring with 104.1 points per game, and stopping them from scoring is a must if the Celtics expect to win this game. They allowed way too many easy shots at the basket against the Nets and need to defend the paint much better in this one.

Move!! - This goes for both the players and the ball. The Celtics need to run on every possession to try to get an easy shot before the defenses are set. They also need to move the ball. They can't get caught up in one on one play and over-dribbling the ball.

Rebound - The Celtics need to crash the boards as a team. Each player, especially the guards, need to make an extra effort to grab every rebound. They were out rebounded by the Nets 42-35 and they must do better if they want to win this game.

Team Play - The Celtics need to play as a team and cover each other on defense as well as sharing the ball and playing offense as a team. Without a superstar, they have to stress playing for each other.

Be Aggressive - The Celtics need to be aggressive on defense, in going after loose balls and rebounds. They need to win the 50/50 balls and play hard from start to finish.

X-Factors
Home Court and Focus
The Celtics begin a 5 game home stand and they have talked about the need to establish a dominance at home. They have won their last 3 at home and hopefully will get a boost from the home crowd in this one.

They also need to keep their focus and not let any of the external hoopla about Doc's return take their focus off of the game and their play.

The Celtics are 5-5 over their last 10 games with Mott. One loss last season was to the Sixers and the officiating was good. The second loss last season was to the Spurs and the officiating was one sided with the Celtics shooting just 8 free throws to 20 for the Spurs. It was Rodney Mott that Rondo was joking with and accidentally bumped in the game vs the Hawks. Even though Mott didn't show any reaction at the time and backed up Rondo's story that he was indeed joking with him at the time, Rondo was suspended for the incident. The 3rd loss last season was to Charlotte where the Celtics shot 26 free throws to 30 for the Bobcats and there were several questionable calls down the stretch. He also called a win over the Pacers and the officiating was terrible in the first half where they called the Celtics for 12 fouls and the Pacers for 5. They did a better job in the second half though. The Clippers are 1-0 this season and 5-5 with Mott in their last 10. His home W/L record this season is 11-6.

Curtis Blair
Curtis Blair is entering his sixth NBA season having officiated 264 regular season games. Blair has six seasons of NBA D-League experience and worked the 2008 NBA D-League Finals. He also officiated in several college conferences, including the Atlantic 10, Atlantic Coast Conference and the CAA. Blair graduated with a degree in Criminal Justice from the University of Richmond in 1992 where he was a member of the 1991 Men’s basketball team that upset Syracuse in the NCAA Tournament. He was drafted by the Houston Rockets in 1992 and played professionally in Australia, Austria and Turkey.

John Goble
John Goble enters his sixth season having officiated 384 regular season games and 13 playoff games. He also officiated the 2010 NBA All- Star Rookie/Sophmore game. Prior to working in the NBA, Goble officiated 104 games over four seasons in the NBA Development League and was selected to officiate the 2007 NBA D-League Finals. He also officiated in several college conferences, including the Southeastern Conference, where he was a tournament official in 2006 and 2007, and the Sunshine State Conference. Goble received a Bachelors degree in Physical Education from Florida International University, and worked as an account executive and a teacher before joining the NBA. Seems odd that Goble already had worked the playoffs in his 4th year in the league and others have been in the league 12 years or more and haven't cracked the playoff rotation yet.

Goble was the referee who called the clothesline on Barbosa in the first Nets game last season a regular foul. He also called a foul at the end of the game on an obvious clean steal that could have changed the outcome of the game. The second game that Goble called last season was vs the Cavs and the officiating was good for the most part. He also called the OT win over the Jazz where the Jazz shot 24 free throws to 20 for the Celtics and the officiating wasn't bad. He called a win over Philly where the Sixers shot 20 free throws to 17 for the Celtics and the refs let them play. His final game last season was vs the Knicks where he made several terrible calls and gave Doc a technical for complaining about them. The Knicks ended up with 31 free throws to 23 for the Celtics and the bad calls changed the momentum of the game. The Celtics are 7-3 over their last 10 games that Goble has officiated. The Clippers are 6-4 in their last 10 games with Goble. His home W/L record this season is 10-8.