Celtics continue home stand with a visit from the Pistons

The Celtics host the Pistons for the 2nd of 4 games this season and look to avenge their earlier loss to them.

Share All sharing options for: Celtics continue home stand with a visit from the Pistons

The Celtics host the Pistons for the 2nd of 4 games this season. In the first meeting, the Pistons came away with an 87-77 win over the Celtics.

The Celtics have won their last 2 games while the Pistons are looking for their second straight victory. The Pistons are feeling pretty good about themselves after handing the Pacers their first loss at home.

The Pistons are the 5th seed in the East and the Celtics are the 4th seed and if the playoffs began today, these two teams would face off in the first round. 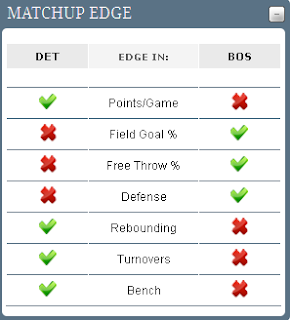 Honorable Mention
Jordan Crawford vs Brandon Jennings
Jennings leads the Pistons in scoring with 17 points per game and assists with 7.8. The Celtics are going to need to slow him down in order to have a chance to win this game. Also, Crawford needs to be aggressive on the offensive end so that Jennings will have to work defensively.

Keys to the Game
Run, Run, Run - The Celtics have proved that when they run and move the ball up the court quickly, good things happen. They can't lapse into walking the ball up, playing half court and depending on iso's for scoring. When they over dribble and slow the game down, they struggle offensively and all the way around.

Start Strong and Play 48 Minutes - The Celtics have been getting off to a strong start in their recent wins. They need to start strong in this one but also play 48 minutes. They have been letting teams back into the game and they can't let up until the final buzzer starts.

Rebound - Rebounding takes effort and desire. The Celtics will need both in order to beat the big front line of the Pistons to the rebounds. The guards especially need to crash the boards.

X-Factors
Home Game and Focus
Once again, the Celtics are at home and should get a boost from the home crowd. The Celtics must come out focused and execute their game plan. They can't let bad calls or rough play by the Pistons deter them.

Official Report
Tony Brothers
Tony Brothers is entering his 21st season as an NBA official and has officiated 1,144 regular season games, 61 Playoff games and three NBA Finals games during his career. He was a member of the crew that officiated the 1996 Mexico Challenge, 1998 Schick Rookie Game, 1999 McDonald’s Championship in Milan, Italy and the 2008 China Games.

The Celtics are 1-1 this season, and 6-4 in their last 10 games with Brothers while the Pistons are 4-6 in their last 10. Last season in a game vs the Knicks, twice Brothers made the correct call from across the court after Dick Bavetta, who was standing right on top of it, missed the call. This is the Celtics third game with Brothers this season as a ref. He called the opening night loss to the Raptors in which the Celtics took 29 free throws to 23 for the Raptors, and the officiating wasn't bad. He also called a 2 point win over the Magic in which Orlando took 29 free throws to 26 for the Celtics and the officiating was good. All in all, Brothers is a decent ref. His home win/loss record this season is 11-8.

The Celtics are 4-6 in their last 10 games with Wall. Wall called a loss to the Nets last season, in which the Nets were allowed to be physical and the Celtics were not. They called a foul on a clearly clean steal that could have changed the outcome of the game. Wall was the ref that called the clothesline on Barbosa by Bogans a regular foul. The Pistons are 0-1 this season and 4-6 in their last 10 games with Wall on the court. His home W/L record this season is 12-8.

Haywoode Workman
Haywoode Workman has officiated 261 regular season games in his first five NBA seasons. A second round draft pick by the Atlanta Hawks in 1989, he played professionally for eight seasons in the NBA and overseas betweeen 1989 to 2000.

Workman spent four seasons officiating in the NBA Development League and also officiated in the CBA before joining the NBA. Workman joins Bernie Fryer and Leon Wood on the short list of NBA players who have made the transition to officiating.

Workman was an All-State quarterback in North Carolina in 1983 and played in the NC/SC Shrine Bowl. He played one year of football and basketball for the all time winnigest HBCU coach, the late Clearence "Big House" Gaines, at Winston-Salem State University. He was inducted into the Oral Roberts University Athletics Hall of Fame in 2003.

The Celtics are 1-1 this season and 5-5 over the last 10 games with Workman. There hasn't been a lot of controversy over his officiating. Unlike some of the NBA officials, he keeps a fairly low profile. He has not been noticeable one way or the other in any of his games with the Celtics. The Pistons are 0-1 this season and 2-8 in their last 10 with Workman. He is not influenced by the home crowd and his home W/L record is 4-12 this season.