Celtics home stand continues with a visit from the Wizards

Jordan Crawford gets a shot at his former team as the Celtics host the Wizards.

Share All sharing options for: Celtics home stand continues with a visit from the Wizards

The Wizards have won their last 2 games, both on the road and are looking for their 3rd straight road win for the first time since the 2011-12 season. The Celtics are looking to get back on track after losing a close one to Detroit. Both teams last played on Wednesday and should come into this game rested.

The Celtics have dominated the Wizards in recent years, winning seven straight meetings overall and nine of 10 at home. The Wizards are getting healthy and are playing well. The Celtics are finally past the trade rumors, for now anyway, and their concentration can be on the game at hand.

The Celtics are in the 4th spot in the East by virtue of leading the woeful Atlantic Division. The Wizards are in the 7th spot. 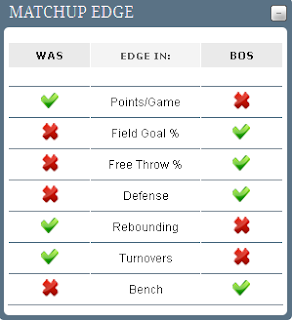 Jordan Crawford vs John Wall
Wall is playing very well, averaging 19.6 points, 4.4 rebounds, and 9.1 assists. Crawford will need to slow him down and also make him work on the defensive end. I expect Crawford to be extra motivated to beat his former team.

Avery Bradley vs Bradley Beal
Avery will have his hands full with Beal, who is averaging 20.3 points, 4.3 rebounds and 3.4 assists.

Keys to the Game
Play 48 Minutes - The Celtics have been getting off to fast starts and have closed strong but have let up in the middle. They need to play hard for 48 minutes and avoid the slumps.

Defense - The Celtics need to especially defend the 3 point line. Washington is one of the better 3-point shooting teams in the NBA, making 39.3 percent of its attempts. But they can't ignore the paint either as Gortat, and Nene can go strong to the basket as can Wall.

Take Care of the Ball - The Celtics committed 18 turnovers in their last game which led to 30 points for the Pistons. They seem to go through periods when they lose their focus and commit multiple turnovers. They need to stay focused and avoid those lapses.

Move the Ball - The Celtics play their best when they move the ball and find the open man. They play their worst when they over dribble and each player tries to do too much. They need to keep the ball moving, including getting up the floor quickly before the defense gets set.

The Celtics are 1-1 this season and 5-5 over their last 10 games with Capers. The win this season was over the Jazz and the officiating wasn't bad. The loss this season was to the Bucks where the Celtics shot 15 free throws to 20 for the Bucks and the officiating was good. One loss last season was the Nets game that resulted in a brawl. Capers gave Doc a T for yelling to Rondo. They let the Nets get away with pushing and shoving and hard fouls the entire first half. The Nets shot 17 free throws to 5 for the Celtics in the first half and 3 of those free throws were on technicals. They did better in the second half after the brawl, but the refs' failure to call the game evenly in the first half led to the fight.

One win last season was over the Pacers. The refs let them play in the first half and then started calling more on the Celtics in the second half. The Pacers shot 28 free throws to 18 for the Celtics. Capers also called a flagrant 2 on KG, which resulted in his ejection. The league downgraded the flagrant 2 upon review which shows that it was a bad call. Another win was a 2 point win over the Bulls where the Bulls shot 17 free throws to 12 for the Celtics and they let a lot go both ways. The second loss last season was to the Heat where Miami shot 28 free throws to 13 for the Celtics and the game was pretty much called one sided for the Heat. The Wizards are 1-0 this season and 3-7 over their last 10 games. His W/L record this season is 13-7.

Eric Lewis
Lewis has spent the last nine seasons in the NBA, officiating 552 regular season games and 10 playoff games. Lewis spent two years working in the USBL, officiating the Finals in 2002 and 2004. Prior to that he spent three seasons in the NBA Development League, where he worked the 2004 D-League Finals and the 2003 and 2004 Playoffs. He tallied eight years in the college ranks, participating in the Atlantic Sun, Ohio Valley, Sunshine State, Florida Sun and Mid-Florida conferences. Lewis officiated in Florida high schools for six years. As a student, he was a member of the basketball team in both high school and college.

Eli Roe
Eli Roe has officiated 443 regular season games during his first eight NBA seasons. Prior to joining the NBA staff, Roe officiated in the CBA, NBA Development League and WNBA. He officiated in the NBA D-League Finals for two years, the D-League playoffs for four years and the WNBA Playoffs for two years. At the collegiate level, Roe refereed in the SEC, ASUN and OVC conferences and numerous Division II and III, NAIA and Juco league games. He also worked in four Division I postseason conference tournaments.

Roe tends to be inconsistent in his calls and can make the calls favor one team over another on any given night. He is also inconsistent with block/charge calls. In an OT loss in Chicago last season, the officiating was terrible. With 12 seconds left, Pierce was trapped and fouled directly in front of Roe. Pierce was hit and his lip was bleeding. Rondo signaled for a time out in Marc Davis' face but Roe called a jump ball instead of the time out or the foul. Even Hubie Brown, who very rarely ever says anything about the officiating, complained about that one. Rondo and Sully both fouled out and there were bad calls all night.

In Roe's final game with the Celtics last season, a win over the Clippers, Roe made so many bad calls that Tommy yelled "Eli! I hate Eli! I hate him!" Two other games with Roe last season were well officiated. The Celtics are 1-1 this season with Roe, with the win coming in the preseason to the undermanned Nets and the loss against Indiana in which the Pacers took 18 free throws to 9 for the Celtics. They let a lot of contact go both ways in that game. The Celtics are 6-4 in their last 10 games with Roe. The Wizards are 2-0 this season and 5-5 in their last 10 games with Roe. Roe is definitely not influenced by the home crowd, in fact the opposite is true. His home W/L record this season is 3-13