Brad Stevens keeping everyone on an even keel

Share All sharing options for: Brad Stevens keeping everyone on an even keel

There are so many benefits to a win like this, even against the hapless Knicks.  It counter-balances the big losses (the Houston game comes to mind), it eases some tension, and it is just downright cathartic.  But perhaps the best thing is that it lends further weight to what Brad Stevens and his coach have been preaching.

Ironically what they've been preaching is not to get too wrapped up in single game results.  Instead they want to focus on the incremental progress and long term development of each player and the whole team as a unit. 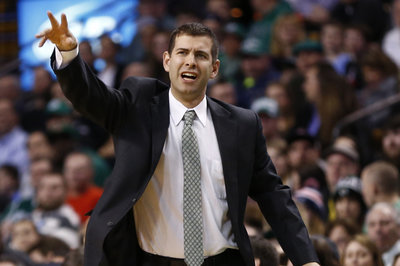 So while getting a few wins in impressive fashion sure feels good to the soul, I'm going to do my best not to get too worked up one way or the other.  Right now the team is on a upswing, some would say that this proves they are better than many gave them credit for.  They've had a few losing streaks this year and will likely have some more in the future.  When those happen, it won't necessarily prove that they are really bad or "tanking" or whatever.  They are just wins and losses along the way toward developing as a team.

Granted, if they start winning at a .700 clip and run away with the 4 seed in the (weak) Eastern Conference, then we'll certainly have something to talk about in the Spring.  If Rondo returns and everything clicks into high gear, that could very well happen.  But even with this recent success, I don't think we can rule out the opposite happening either.  (Fear not tankers, there's always a chance.)

The truth about where this team is probably falls in between those two extremes, and that's fine.

That's deep, and true.  It is easier for fans to get excited for these wins because we don't have to prepare for the next game (at least not in the same way).  But it is good emotional self preservation to not get too excited for a blowout win and not get too depressed over a blowout loss or losing streak.

So I'm going to choose to follow our coach's lead on this one.

Brad Stevens on not overreacting to today's blowout win: "They (Celtics) know I'm not going to do cartwheels. They know me better than that"

The end goal is still what it has always been.  Development and progress.  To that end, it is very comforting and encouraging to hear all the praise the players were heaping on the Coach and his staff after this game.  They've really seemed to buy into what Stevens is selling.  That, more than any scoreboard result, is something to get pumped about.

I will, however, laugh my head off at the Knicks.  Hoooo boy.  When they fail, they fail catastrophically.