Share All sharing options for: Celtics and Nuggets put win streaks on the line as they clash at the Garden

The Nuggets have quietly compiled the 4th best record in the West and the 6th best record overall. They are 9-1 in their last 10 games while the Celtics are 6-4 in their last 10. The Celtics are playing well at home with an 18-9 record at the Garden while the Nuggets have struggled a bit on the road with an 11-15 record away from the Pepsi Center.

This is the first meeting between these two clubs this season. They will meet again in just 9 more days. Right after the All Star break, the Celtics will hit the road and the Nuggets will be their first game on a 5 game road trip. This will be a big test for the Celtics and hopefully they will be up for it. 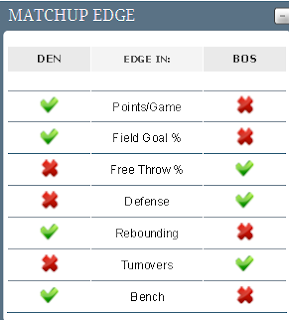 Gallinari is averaging 17.1 points per game and is capable of hitting shots from the perimeter as well as getting to the basket. He has a height advantage on Pierce which may make guarding him more difficult for the Captain. Pierce needs to make him work on the defensive end and use his veteran wiles to limit Gallo's scoring.

Bass will have his hands full with Faried who has earned the nickname "Manimal." Faried plays with an abundance of energy and is a beast on the boards. He averages 12.2 points and 9.7 boards a game and slowing him down will be key for the Celtics.

The Celtics have had their share of battles with Andre Iguodala when he played for the Sixers. He is averaging 13.5 points a game for the Nuggets but is capable of putting up big numbers on any given night.

Defense - I may sound like a broken record, but Defense is the key to every game. If they come into every game with the mindset to make defense a priority, they stand a good chance of winning every one. When they slack off on defense, it affects every part of their game. The Nuggets have won 31-1 in games where they score 100+ points. They also rank first in the league in fast break points (19.4). The Celtics have got to play tough defense if they want to win this game.

Rebound - Since much of rebounding is effort and desire, the effort that the Celtics show on the boards usually indicates how much the team really wants the game. The Nuggets are a big team and are a very good rebounding team, ranking 2nd in the league with 45.4 rebounds per game and 1st in offensive rebounds with 13.8 per game. The Celtics are 2nd to last, pulling down only 39.7 rebounds per game. The Celtics have got to make an effort to crash the boards as a team.

Be Aggressive The more aggressive team usually gets more calls and taking the ball to the hoop usually ends in either a basket or a foul or a kick out to a wide open teammate. The Celtics can't settle for jumpers, especially against a team like the Nuggets who will clean up the rebounds and turn them into a fast break. They have to be aggressive in going to the hoop. They also must be aggressive in going after loose balls and rebounds.

Move the Ball- When the Celtics move the ball and find the open man, they are very tough to beat. When the ball movement slows and players try to do too much, it usually ends in a loss. But the Celtics must be careful with their passes as the Nuggets are 6th in the league, forcing 15.5 turnovers a game.

Home and Rust vs Fatigue

The Celtics are home where they have been playing well and they need to use the crowd to give them an advantage in the game. The Nuggets are a great home team but have struggled at times on the road with a 10-15 record away from the Pepsi Center. The Celtics have also had 2 full days off without practice while the Nuggets are playing in the second of back to back games.

Tony Brothers is entering his 19th season as an NBA official and has officiated 1,093 regular season games and 61 playoff games during his career. Brothers made his first NBA Finals appearance during the 2011-12 season. He was a member of the crew that officiated the 1996 Mexico Challenge, 1998 Schick Rookie Game, 1999 McDonald’s Championship in Milan, Italy and the 2008 China Games. Prior to joining the NBA, Brothers spent four years officiating in the CBA, including three CBA Finals and a CBA All-Star Game. He has one year of collegiate officiating experience at the Junior College level. Brothers also has seven years of high school officiating experience in Virginia, including three state tournaments. As a way of honoring his late mother and to give back to his community, Brothers operates Sassy Properties, an organization dedicated to providing quality and affordable housing for disadvantaged families. He is also a board member of BillBro, an organization that provides scholarships for women and minorities. In 1994 he started a mentor program in the Tidewater, Va. schools.

There are several articles about what a terrible ref Brothers is and detailing his misdeeds. He has angered a lot of fans of just about every team because of bad calls, no calls, and one sided officiating. The Celtics are 2-2 this season with Brothers. He called a 115-85 win over the Nets in preseason and also the first regular season loss to the Nets. Brothers was responsible for calling Bogans' clothesline and choke job of Barbosa a regular foul. He also called a clean block a foul down the stretch which could have changed the outcome of the game. He called a win in NY and several times made the right call from across the court when Dick Bavetta, as the ref on the play, failed to do so. The Celtics are 5-5 in their last 10 games with Brothers on the court. The Nuggets are 1-0 this season and 7-3 with Brothers in their last 10. His home W/L record this season is 24-16.

Poole joined the NBA officiating staff nine years ago and has officiated 467 games. After three seasons in the NBA Development League, where he worked the postseason each year, Poole spent 12 years in the college ranks in the Southeastern Conference, Big East, Atlantic 10, Conference USA, Big 12, Southern Conference, Ohio Valley Conference, and Atlantic Sun Conference. He officiated the NCAA Tournament from 1996 through 2004, including the 2004 NCAA Final Four. While attending Newport News Apprentice School, he received Basketball MVP honors three out of four years.

The Celtics are 2-1 this season and 7-3 over their last 10 games with Poole as a ref. In his last game with the Celtics last season, the refs called a flagrant 1 on Mickael Pietrus, which was a terrible call. They gave the Pacers 2 free throws and the ball plus an additional technical free throw when they protested the bogus call. He called wins over Toronto and Houston and the loss to the Kings this season. The officiating in all of those was fairly even. The Nuggets are 1-1 this season and 6-4 in their last 10 with Poole. His home W/L record this season is 17-16.

In addition to being a member of the NBA officiating staff for the past 25 seasons, Eddie F. Rush has also been a FIBA official for 12 years. While with the NBA, he has officiated 1,549 regular season and 167 playoff games, including 11 NBA Finals games. Rush was also a member of the crews that officiated the 1994 Japan Games in Yokohama, and the 2000 and 2008 NBA All-Star Games. He also officiated in the 2008 Olympic Games in Beijing. Rush has four years of officiating experience in the CBA, where he worked playoff and finals games. Prior to that, he spent four years officiating at the collegiate level, working in both the Mid-Eastern Athletic and Southern Intercollegiate Athletic Conferences. Rush also has four years of high school officiating experience in Georgia.

Rush holds a B.B.A. in Marketing from Georgia State University, where he played basketball for two seasons. Rush transferred to Georgia State from Florida A&amp;M, where he was a member of the track team and the 1980 MEAC Mile Relay Champions, and was named Most Promising Athlete. He also was a member of both the track and basketball teams at W.H. Spencer High School in Georgia, where he was the basketball Regional Tournament MVP and the Offensive Player of the Year. Eddie F. Rush officiated the last game of the NBA Finals for five seasons in a row (2005, 2006, 2007, 2008 and 2009). He was the least liked ref by Cavs fans when they still had LeBron because he was the only ref that called more losses for them than wins.

He is also one of Tommy Heinsohn's least favorite refs and there are several rants on file of Tommy complaining about Rush's ineptness. Whenever Tommy gets on the subject of bad refs, Eddie F Rush is sure to come up. This is the Celtics' first game this season with Rush. They are 6-4 in their last 10 games. In a loss to Chicago last season, the refs allowed the Celtics to get hacked and fouled all night with no calls. The Bulls shot 28 free throws to 18 for the Celtics. The Bulls shot 9 free throws before the Celtics shot 1. In the last game he called for the Celtics last season, the officiating was terrible. After a series of obviously terrible calls against the Celtics Tommy went off and said, "Eddie F Rush is at it again. More games disintegrate because of this guy. They should ban him from officiating." It wasn't just Tommy who saw his bias. Here's a comment from the Pacers forum: "If the Celtics punched these refs out, I wouldn't blame them." Rush isn't just a bad official, but he seems to always have it in for the Celtics as well. This is his first game with the Nuggets this season as well and they are 7-3 in their last 10 with Rush. Not only is this Rush's first game with Boston and Denver, but it is Rush's first game officiating this season so he has a home W/L record of 0-0.