C's defense takes center stage as they host the Warriors

After a rare 3 days off, the Celtics will try to keep their 7 game home win streak going when they host the Golden State Warriors.

Share All sharing options for: C's defense takes center stage as they host the Warriors

A rested Celtics team will try to extend their 7 game home win streak and avenge their earlier loss as they host the Golden State Warriors. The Celtics have been off since Monday and have had a chance to get some rest along with giving the new guys a chance to learn the system a bit better. The Warriors are playing the 4th of a 5 game road trip and last played on Wednesday in New York. They will finish their trip in a back to back on Saturday in Philly.

The Celtics should get their first look at newly signed big men DJ White and Shavlik Randolph, who both begin playing on a 10 day contract tonight. They should help the Celtics on the boards, even in their debuts. Terrence Williams and Jordan Crawford should both be a bit more familiar with the Celtics system after a couple of days of practice and hopefully we will see more of them as well.

Andrew Bogut (back) out 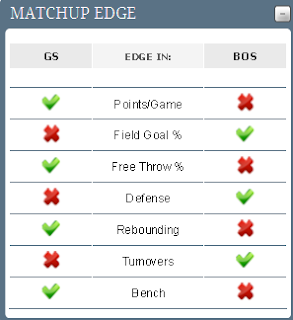 Stephen Curry is a tough cover for anyone. He is coming off a 54 point explosion against the Knicks on Wednesday. Both Avery and Courtney Lee have promised that Curry won't score 54 points on them in this game. Bradley's defensive skills will definitely get a workout in this one. Curry sometimes will have defensive lapses and when he does, Avery needs to be ready to take advantage.

Lee is a tough player and isn't above playing rough and dirty as evidenced by the fact that he was suspended for the Warriors last game because of a shoving match. Lee is leading his team in rebounding and so Bass needs to box him out and deny him position for rebounds to prevent second chance baskets and, especially, tip ins and put backs. Lee plays hard every game and Bass needs to match his intensity. Lee's 37 double-doubles lead the league and he is averaging 27.7 points and 12.0 rebounds in his last three games at Boston.

Lee will have his hands full with the 6'7" Thompson, who is averaging 16.3 points per game. The Celtics "Pit Bulls" ability to stop Curry and Thompson will be key to winning this game.

Defense - The Warriors can put up points quickly and in bunches. It will be important for the Celtics to bring their defensive intensity into this game, especially to shut down the Warriors' fast breaks. The Celtics won't if they try to outscore the Warriors without playing tough defense on them. The Celtics must guard the perimeter as the Warriors lead the league in 3 point percentage are dangerous from beyond the arc.

Take Care of the Ball - The Warriors can be very disruptive by getting into the passing lanes and are very good at scoring off turnovers. The Celtics seem to go through periods in every game where they turn over the ball several times in a row. The Celtics need to stay focused and not give the Warriors any easy opportunities to steal the ball or to get out on the break.

Be Aggressive - The Celtics need to come out focused and take control of the game from the beginning. The Celtics also have to be the more aggressive team throughout the game. They must be aggressive on defense, on the boards, in chasing down lose balls, and in taking the ball to the hoop and not settling for jumpers.

The Celtics have been off since Monday while the Warriors played a tough game on Wednesday. The Celtics' veterans had a much needed two days of rest while the new guys had a chance to practice and learn. Hopefully they won't come out rusty but will instead be energized and come out strong.

A veteran of 22 NBA seasons, Mike Callahan has officiated 1,315 regular season, 122 playoff and 12 NBA Finals games. He was a member of the crews that officiated the 2007 NBA All-Star Game, 1994 Mexico Challenge and the 1996 Schick Rookie Game. Prior to joining the NBA, Callahan spent three years officiating in the CBA, including the 1989 and 1990 CBA Finals. A member of the Cardinal O’Hara High School basketball team for four years, Callahan also coached the freshman basketball team after graduating. Callahan has run a clinic for referees called “Hoops4Heros” that benefits local fire departments and maintains strong ties to the Philadelphia community through his volunteer work with the Don Guanella School for developmentally disabled boys.

The Celtics are 2-2 this season and 6-4 over their last 10 games with Callahan officiating. He was one of the refs who officiated Game 7 of the ECF last season. He also called an 88-79 loss to Philly in the preseason. In the win over the Jazz Callahan's officiating inspired a classic rant by Tommy about an especially bad traveling call he made on Jeff Green. He called the game in Denver where the Nuggets shot 36 free throws to 16 for the Celtics and the officiating was terrible. The Warriors are 1-1 this season and 5-5 over their last 10 with Callahan on the court. His home W/L record this season is 26-15.

The Celtics are 0-2 this year with the only games being a loss to the Nets in the preseason and a loss to the Bulls. The officiating in that Bulls game was terrible (although most of the bad calls were by Marc Davis rather than Corbin). Even Hubie Brown was complaining about how bad many of the calls in that game were. Corbin didn't call any games last season so the his previous games with the Celtics were all in 2009-10. They are 7-3 in their last 10 games with Corbin. The Warriors are 1-0 this season and 7-3 in their last 10. His home W/L record is 20-19.