The Celtics look to avenge their earlier loss to the Bobcats as they complete their 2 game road trip.

Share All sharing options for: Celtics look to get back on track as they visit the Bobcats

The Celtics are playing in the first of back to back games and are on the road, both factors should make this game one that they should take seriously, in spite of the Bobcats' 13-50 record. The Bobcats may have a losing record, but this team always plays hard as evidenced by the Celtics' 94-91 loss the last time they visited the Bobcats. Granted that the Celtics were playing in back to back games after a triple OT game the night before, but it just proves that if a team shows any weakness, the Bobcats will try to exploit it. They already have the best chance for the top pick so why not play spoiler and make their record a little better along the way.

The Celtics have moved up to the 6th spot in the East, tied with Atlanta who are in 7th, but get the higher seed because they lead the season series. They are just half a game behind Chicago for the 5th seed and 2.5 games behind Brooklyn for the 4th spot. They are also just 1.5 games in front of the Bucks who are in 8th. The Bobcats have the worst record in the league and now are playing for ping pong balls, but in spite of that, they always play hard and so the Celtics can't take them for granted.

This game is the first game of a back to back set with the Raptors coming into the Garden on Wednesday. After KG's 5-19 shooting against OKC, this might be a good time to give him another night off. Greg Dickerson is reporting that Paul Pierce may have the night off for rest. We may get to see some DJ White and Shavlik Randolph, who are on their second 10 day contract but haven't seen much playing time. The Celtics need to win this and they should, with or without KG and/or Paul Pierce.

Brandon Bass is coming off one of his best games of the season and he will need to produce in this game as well. Mullens is averaging 11.8 points and 7.1 rebounds per game but in the last meeting between these two teams, Mullens exploded for 25 points and 18 rebounds. The Celtics need to do a better job of guarding him in this one.

Walker is playing very well for the Bobcats, averaging 17 points , 3.4 rebounds and 5.6 assists per game. Bradley should be able to match his speed and stay ahead of him to slow down both Kemba and the Bobcats' offense. After facing Russell Westbrook in the last game, Walker should seem like a cakewalk.

Henderson is having a decent season for the Bobcats, averaging 13.3 points, 3.6 rebounds and 2.2 assists per game. In the last meeting between these two teams, he erupted for 16 points, 4 rebounds and 4 assists. Lee needs to keep him from having another big game. The Celtics also need Lee to get his offensive game back on track. 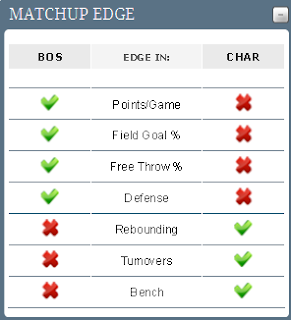 Focus and Energy - When the Celtics face teams with losing records, they often come out flat and lack focus and energy and they lose to teams they should easily beat. The Celtics have got to stay focused and play with energy the entire game because the Bobcats always play hard, even though they don't have the most talent in the league, and will take advantage of any lapse from the Celtics.

Defense - The Celtics need to make defense their priority. The effort that the Celtics put out on the defensive end carries over to the offensive end as well. The Celtics have been playing some very good defense led by their Pit Bull backcourt and they need to continue to do so.

Rebound - Good things happen when the Celtics crash the boards. When they show energy in rebounding, that energy spreads to other areas of the game. They prevent second chance points and fast break baskets by grabbing the rebounds. Rebounding is effort and the Celtics must put out the effort to win the battle of the boards.

Be Aggressive - When the Celtics are the more aggressive team they usually win. They need to be aggressive in going to the basket, in grabbing rebounds, and in hustling after loose balls. Unfortunately they often come out passively against the worst teams and so they have to make an effort to be aggressive in this one.

Take Care of the Ball - They also must focus on taking better care of the basketball. They turned it over 19 times against OKC and it's hard to win when you give the other team that many extra possessions. They have to make smarter passes and keep their focus when handling the ball.

This should be an easy game for the Celtics but at times they let down their guard against the teams with the worst records. They also tend to lose focus on the road. And that brings us to their mentality. They need to come out playing like they are playing the Heat at home and if they do, they should get an easy win. It would be nice to see the new guys get some experience on the court in this one.

Malloy has officiated 629 regular season NBA games and 32 playoff games, including three Finals games, over the past 10 seasons. Prior to joining the NBA, Malloy officiated for one season in the NBA D-League, three seasons in the CBA and three seasons in the WNBA. He worked the 2002 NBA D-League Finals and the 2001 CBA Finals. Malloy attended St. Joseph’s University before transferring to Philadelphia University, where he was a member of the basketball team and named the ECAC Player of the Year in 1993 and went on to earn a degree in Marketing. While in high school at Cardinal O’Hara, he was named the 1989 Most Outstanding Player in Philadelphia for his achievements on the basketball court. Ed Malloy joins Tim Donaghy, Duke Callahan and Joe Crawford as referees who graduated from Cardinal O'hara HS in Philly.

In 2003, when Doc was with Orlando, Malloy called a technical foul on Andrew DeClercq for staring. Doc called it one of the worst calls he ever saw (boy has he seen a lot worse since then!)and he said that he felt that Malloy had been intimidated all night. Fast forward to the Celtics game in Utah two seasons ago when Malloy, no longer intimidated, called 2 quick technicals on Doc and ejected him. Here is Doc's version of those calls.

Malloy was also on the crew that officiated game 1 of the Miami series in the 2010 playoffs where 5 technicals were called and Kevin Garnett was ejected. He also officiated game 1 of the Heat series in 2011. In that game, after ignoring a flagrant foul by James Jones and then a second flagrant foul by Dwyane Wade, Malloy ejected Pierce for technicals when he objected to both flagrants against him in less than a minute. Last season he called game 2 vs the Hawks in the playoffs. The Celtics shot 31 free throws in that game vs 20 for the Hawks. He also called game 5 in the Philly series in which the Celtics shot 33 free throws to 16 for the Sixers. This is Malloy's second game with the Celtics this season. The first game was the win over the Lakers at home where the Celtics shot 25 free throws to 30 for the Lakers and the officiating wasn't all that bad. They are 5-5 in their last 10 games with Malloy as an official. The Bobcats are are 1-3 this season and 2-8 over their last 10 games with Malloy as a ref. His home W/L record is 28-25.

Brent Barnaky enters his third NBA season having officiated 101 NBA games. Barnaky came to the NBA with 10 years of collegiate officiating experience in the Southeastern Conference, Big East, Conference USA and other college conferences as well. He completed three years of postseason officiating in the N.I.T. (2008-2010). He officiated the 2008, 2009 and 2010 NBA D-League Playoffs, and the 2009 and 2010 NBA D-League Finals. In the off season, Barnaky gives back to the game, by training and developing other officials at referee camps/clinics. He entered the NBA last season as one of five refs chosen from the D-League to officiate a handful of games the previous season. Prior to his being hired onto the NBA officiating staff, Barnaky was a civil trial lawyer. He continues to remain actively involved with pro bono work to public at large clients in need of legal services.

The Celtics are 1-2 this season and 4-6 in their last 10 games with Barnaky on the court. In a loss to the Pistons last season that Tommy Heinsohn called the worst officiated game all season, Rondo was ejected and the Pistons shot 46 free throws to 15 for the Celtics. One loss was in the preseason to NY. The other loss this season was to the Bucks where the officiating was terrible. Milwaukee shot 36 free throws to 20 for the Celtics. He allowed the Bucks to mug the Celtics all game and called ticky tack fouls on the Celtics but when they tried to commit an intentional foul to stop the clock, they wouldn't call it. The win was over the Raptors where the Celtics shot 30 free throws to 26 for the Raptors and the officiating was good. The Bobcats are 0-2 this season and they are 0-10 over their last 10 with Barnaky. He is one of the rare refs that has a home W/L record with more wins for the road team than the home team. His home W/L record this season is 18-21.