Celtics look to get back on track against visiting Raptors

After failing to show up against the Bobcats, the Celtics will host the Raptors and hope to get back on track.

Share All sharing options for: Celtics look to get back on track against visiting Raptors

This is the third regular season meeting between these two Atlantic Division teams with the Celtics leading the series 2-0. They will meet one more time on the final day of the regular season. After losing by 26 points to the Bobcats, the Celtics need to redeem themselves with a win in this one.

The Celtics are playing in the second of back to back games while the Raptors are well rested, having been off since Sunday. The Raptors have played better since the trade that brought Rudy Gay to Toronto, but they have also been struggling with injuries. Starters Gay and Bargnani missed their last game and Gay is listed as questionable while Bargnani is listed as out for this one.

Every game becomes important for the Celtics as they are battling for playoff positioning, which makes last night's complete lack of effort totally unfathomable. . The Raptors are in the unenviable 9th spot in the East, 8.5 games out of playoff contention. They won't make the playoffs and without some serious tanking, they won't get a great draft pick either.

The Celtics were completely embarrassed by losing to the Bobcats by 26 on Tuesday night. They showed no effort against a team that they should have easily beaten,even without Paul Pierce. They are still in the 6th spot because Atlanta has also lost their last 2. They have fallen a full game behind Chicago in 5th and 3 games behind 4th. They also remain 1.5 games ahead of Milwaukee, who also lost. A win against the Bobcats could have given them some breathing room in 6th place but their lack of effort kept them from capitalizing on losses by both Atlanta and Milwaukee.

Both KG and Paul Pierce could reach milestones in this game. Kevin Garnett, who has scored 25,189 points, needs just 3 more points to pass Jerry West for 15th place on the NBA's all-time scoring list. Paul Pierce has 23,748 points is on the verge of another milestone as well. He's only 10 points away from moving ahead of Charles Barkley for the 20th spot on that same list. It would be special for both players to achieve a milestone in the same game.

The Celtics need to take the Raptors seriously. The Matchup Edge shows that Toronto has the edge in every category except FG% and defense. It won't be a cakewalk by any stretch and so if the Celtics don't give more effort than they did against Charlotte, this game could end even worse. 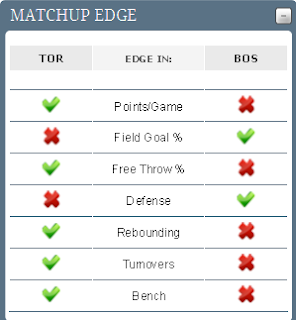 DeRozan is the Raptors leading scorer (other than Gay) with 17.8 points per game. He might not find scoring quite as easy against the Celtics' pit bulls in the back court.

Ross is very athletic and is fresh off his slam dunk championship. He is averaging 6.1 points, 2 rebounds, and 0.8 assists per game, but in his last game, a start in place of the injured Rudy Gay, he had 14 points, 5 rebounds, and 3 assists. Pierce got the Bobcats game off so should be rested for this one. Gay is listed as questionable with a sore back, but we could see Gay get the start, in which case, this matchup becomes even more important.

Rebound - The Celtics have got to crash the boards to prevent second chance points. Much of rebounding is effort and desire as evidenced by guards leading the team in rebounds in some games. The effort they put out on the boards will usually spread to other areas of the game as well. They got out rebounded by the Bobcats 48-29 and have to do a better job on the boards in this one if they expect to win.

Defense - The Celtics must make defense a priority in each and every game. They have been getting back to their defensive roots and need to continue to play that tough team defense all game in every game. With the Raptors, they must particularly guard the perimeter as they love to shoot from beyond the arc. After allowing the Bobcats to score 100 points, hopefully we will see a little better effort in this one.

Ball Movement - The Celtics need to continue to move the ball and find the open man. Hero ball doesn't win games and they won't win many games when they spend half of the shot clock dribbling the ball. At the same time, they have to make smart passes and not turn the ball over.

Back to Back and Home Court

The Celtics 1-2 this season and 5-5 in the last 10 games with Kogut calling them. In one loss last season to the Lakers that Kogut called, the officiating was terrible and LA shot 20 free throws to 5 (yes, FIVE) for the Celtics. In a game vs the Pacers this season, the refs let them play in the first half and then in the second half they started calling a lot of ticky tack fouls on the Celtics. KG was called for a flagrant 2, which has since been downgraded. The Pacers shot 18 free throws in the second half to 9 for the Celtics. The second loss was to the Bobcats where the Celtics shot 26 free throws to 30 for the Bobcats and there were questionable calls both ways. The Raptors are 1-4 this season and 2-8 in their last 10 games with Kogut as a ref. His home W/L record this season is 22-17.

A winner of the Vanguard Club Achievement Award in recognition of outstanding accomplishments in the field of sports, NBA veteran official Michael Smith has officiated 1,131 regular season and 31 playoff games, as well as the 1997 Schick Rookie Game, the 2000 Mexico Challenge and the 2003 NBA Europe Games.